I found N12 was sending audio to a reverb even though the send was turned off.

I had to toggle the send on and off again for it to not send.

Has anyone else had this problem?

Here is a little video of it happening.

Switch automations are dodgy from very early days, the strange state as shown in the video may happen sometimes. Could you check the automation track to see if anything is written, and try to clean it up and re-do.
I always try to avoid using on/off automation when possible because these happen.

Thank you for your reply!

Sadly it seems accurate information of the automation status can’t be relied upon in N12 .

Luckily this was an obvious problem but if it were subtle it may sneak through. This really is quite bad.

I this video you can see the first time I play the send does not appear active, then I lift the send enable atm point a bit and play again and it does appear active. Keep in mind that the send is in fact enabled and sending in both instances

That’s so interesting, how did you manage to bring points to that 99% position in the first place? Those are binary state automation that must land on 0 or 1, if you can find a way to get anything in-between, that will be a great catch.
Could you open the “Browse Project” - CTRL/CMD + B for that automation lane and check what the 99% point looks like? 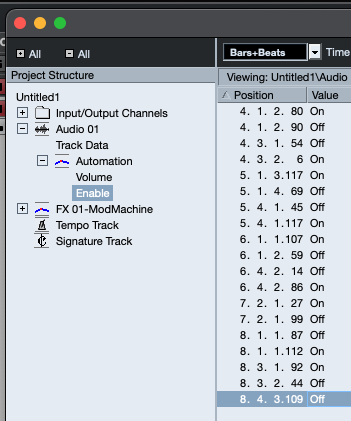 Oh, I’ve found a way to do this in the first attempt.

If you copy any other float value automation, e.g. send gain, to the on/off state lane, you can get something in between. And anything below 1 will be treated as OFF but on screen, it indeed looks like ON. You revealed this very interesting case, nice catch.

Wow. Great detective work! In my case the audio in question was copied with its automation from another track.

The track I was copying to was a duplicated track too.

Perhaps these factors have something to do with it?