I have a problem here, as The Studio 26 is an audio interface. Is it the one that is set in the Audio System pane of your Studio > Studio Setup window ? If so, the outputs should be directly available in Cubase, provided that they are activated in the Studio 26 pane, or whatever it is called, as a complement of the previous Audio system pane of the same window.

Beside this, the Line 6 Helix has both MIDI and audio outputs : what kind of signals do you want to use from it ?

Is it possible to have separate input and output devices?

I think this generally depends on the driver you’re using. Many (most?) of us use a driver that comes from the manufacturer of the interface. In my case it’s MOTU that provides a driver for my MOTU 16A. My driver allows me to use different input and output devices, but as far as I know they have to be MOTU devices.

So in your case you pick a driver and if you’re ‘lucky’ you can see both devices. If you can’t then I think you need a different driver.

I guess you are on a Windows PC.
Cubase configuration requires you to select an audio device 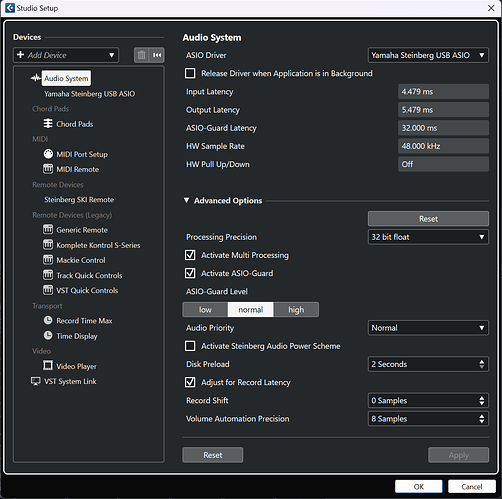 The above answer sounds the sensible option. If not then you are in the realms of using asio4all which allows this but it can cause problems with the clocking between the two audio devices. The simple answer is Cubase doesn’t support this for good reason.