Has anyone experienced a “Serious Graphic Error” message within Cubase which after closing that message dialog box, then closes/crashes Cubase?

Re my graphics, I have no graphics issues with any other programs, including some graphics intensive apps which run for many hours at a time. However, I have tried rolling back graphics drivers and the “Serious Graphics Error” still happens.

I once had an issue and changing driver did not help, I had to fully uninstal the gfx driver and the reinstall. Was a cubase issue too.

I had already done that. Complete GFX driver uninstall in safe mode using DDU and then reinstalled a previous driver which never had this problem.

And what do you know, the fault still happens. So it appear to be 12.0.50, and ot the driver causing the problem, as nothing else has changed.

It’s very strange. I left a complex project running on repeat play with many plugins active on screen with lots of graphics happening. It played fine for about 20 hours, and then the following error came up. 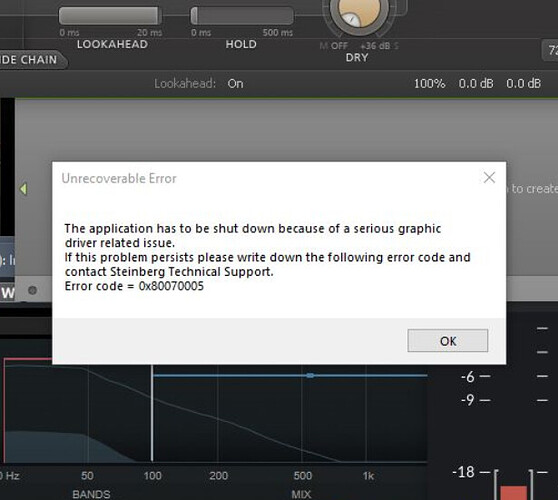 I cleared that error and this error immediately popped up. 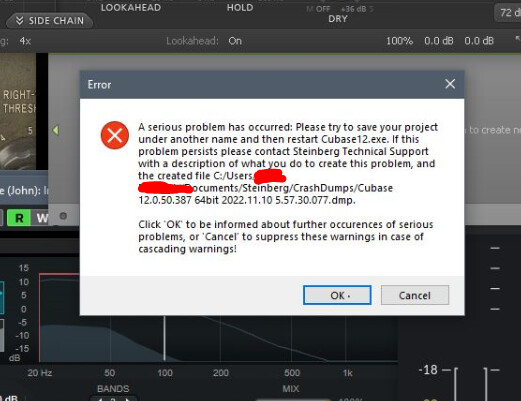 funny thig was, through out all these ‘critical’ errors, CB was still playing perfectly in the background, with all 3rd party plugins still operating properly, yet some steinberg stuff, like the Squasher plug and the audio performance meters were permantently not operating any more.

I closed down Cubase and restarted it, and MUCH to my annoyance, Cubase had autosaved my project, even though AUTOSAVE IS TURNED OFF IN PREFERENCES!!!

I owuld never save a project with an unstable Cubase showing critical errors.

Cubase is such a lovely programme in many ways, and I’ve been using it for many years, but it is becoming very unreliable as time goes by.

But no matter. Expect new unwanted features in the next big release and few if any bugs fixed, and plenty of new ones. At least that’s what’s happened the last few years, and I can’t see any reason to expect anything else.

Hi
I have had a similar problem with Nuendo 12 constantly crashing showing the same error message as in your screenshots.
I found a suggested fix which involved uninstalling the Nvidea driver for my graphics card and then doing a clean install of the latest driver but using the option to install only the driver and not anything else that comes with the Nvidea package.
Initially I thought this had solved the problem but then the problem resurfaced although it wasn’t crashing as frequently.
I have sent crash dump files to Steinberg support but have had no help or reply as yet.
If anyone knows how to fix this I would be very grateful as the crashing is making life very tedious and paying customers patience is being heavily tested!
My set up is a brand new purpose built Windows 11/ intel i9 PC from Scan International

no, but now plugins are just dropping audio at random since the update. It has been one long struggle with 12.