I’m trying to work out how I can set the print quality for Dorico’s print screen in order to ensure this prints as “best”. I can do this easily through the system dialog, but then all the useful features such as spreads, 2ups and printing final pages on A4 are no longer accessible.

However, almost no matter what I do, the print is being sent as a standard. I’ve tried amending the print quality and saving as a new default in the Mac OS printer settings, which are also set to use the last print run when being run. However, this doesn’t seem to have an effect on the Dorico print button.

As a workaround, I’m able to export to PDF and then control this there, but it’s really not ideal, and means I need to export the final pages seperately to have them as a single A4 piece.

When we set up the print job from Dorico, we tell the printing subsystem to use the highest available resolution on the printer, though the APIs we’re using don’t provide a means to control the “quality” setting (which I suspect is probably unique for each printer in any case). There’s certainly nothing you can tweak directly within Dorico’s print settings at the moment that would influence this, I’m afraid.

So in Mac OS dialog at least, the quality setting is printer agnostic:- 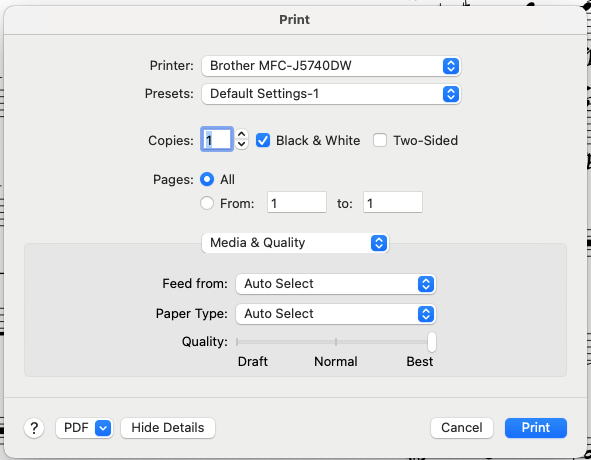 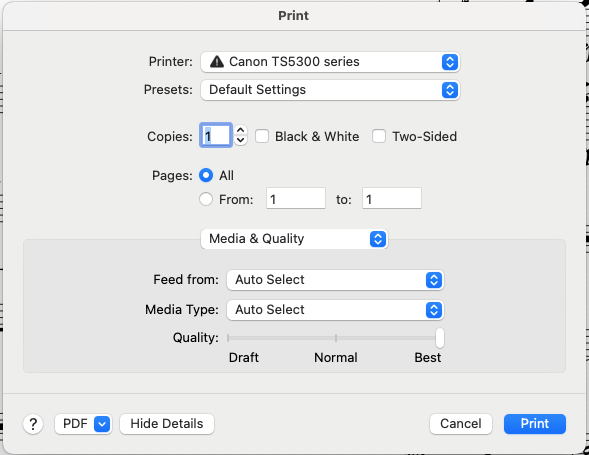 Now obviously that doesn’t mean it is in terms of what the driver expects of course, and I don’t know what that means from the perspective of the printer. Unfortunately, it appears that whatever is being submitted in the print job from Dorico is interpreted as “Normal” on both my printers, and results in blurry prints.

Apologies; should have clarified that I’m currently running Monterey.

That wasn’t really my point. My point was that I’ve used every version of MacOS X going back as far as Puma (Mac OS X 10.1) but I don’t recall ever seeing that slider with any of the printers I’ve had connected to my Mac – but I have only ever used laser printers. So I wonder whether this kind of slider appears generically for inkjet printers, for example. In any case, Dorico can’t access this setting through the APIs available to it.

Ah ok, apologies, misunderstood. Would it be possible to have the option that exists for printing odd pages on a different size sheet available for the graphics side of thing, so a single page PDF could be produced when selecting spreads/2up etc for the odd pages?

Potentially, yes, but I can’t say for sure when we would be able to look into this. Sorry, I know this is a problem for you.

It’s not a blocker, or anything, just an efficiency saver really.