A weird behaviour occurs at the two A (bar 13) in the Solo Violin (Divisi: Solo / gli altri)
The playback of the two notes is shortened and I can’t lengthen them by dragging rightward.

When I change the pitches to notes that are NOT part of the tremolo-notes below it works fine and plays back accordingly. (Independent Voice Playback is activated of course – and Solo Violin selected on the corresponding channel in NotePerformer …)

Did I miss something or is this a bug (instead of a limitation)? 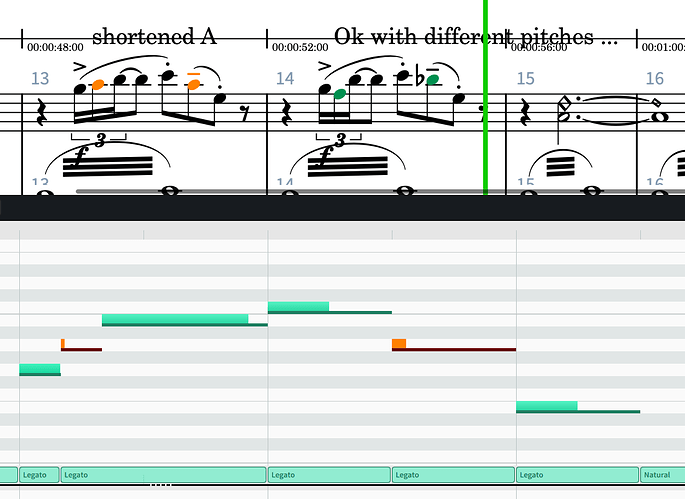 Do the voices on the two staves go to separate MIDI channels in the Play mode? That could be key.

Thank you, Derrek! I actually HAD changed the MIDI-channels – but they somehow switched back so that Solo Violin AND upper voice of tutti shared Channel 13. Weird …

I distribute them anew and will keep an eye (and ear!

Now tha Channels are definitely distributed correctly – BUT:
When I restore Unison the lower staff vanishes (as it should …), leaving the upper (which should now sound Tutti) with the Solo Violin Sound …

Obviously, because it can’t change the MIDI-channels in between – and a patch change in NotePerformer is not possible AFAIK …

Thank you, Daniel!
I just re-configured the Solo Violin-part to a new Up-stem Voice and re-loaded NotePerformer to get a better configuration of NotePerformer’s channels – works fine!