I’m beginning cubase pro 9, and I’m taking a course in composition using Kontakt 5. In the course, the instructor shows how to open up a single instance of Kontakt 5, and then open up midi (audio/ I used aux channels in protools) tracks in the DAW. I have searched the manual, and have not yet found how to route (Kontakt channels 1-16) through the daw. In fact, at this point, I can access channel 1 in cubase pro 9, but not channels 2-16. (I must be overlooking something.) Any pointers?

I’m trying to save system resources, so single instance openings of a VST are a good thing.

Although in most cases it might be better to use separate instances sometimes it might be preferable to create a multi in Kontakt and then it’s nice to be able to route those channels separately in Cubase. For instance for string or choir groups with different microphone placings it can be more convenient to edit these in the same instance (multi).

Like DaveAbbott said, in most case it will be better to use separate instances. But the argument of using separate instances only goes so far as the number of CPU cores you have. If you are going to use more instances than you have cores you might as well group some obvious instruments together in a multi.

Kontakt 5 is capable of Multi-CPU usage in a single instance. This has to be activated in the preferences of Kontakt. However, with the introduction of Asio Guard it is recommended to use seperate instances for different instruments and multi cpu support turned off inside Kontakt. Of course if you don’t make use of Asio Guard, than it doesn’t matter. Asio Guard can greatly improve performance at low latency settings.

When you open your “single instance of Kontakt” where are you doing that?

Aside from the question over whether single instances or multiple are better, this is how you access the other channels.

Add a midi track for each new channel you want to access and change the destination and channel in the inspector:
Then whichever track is record monitoring will be the one you can play. 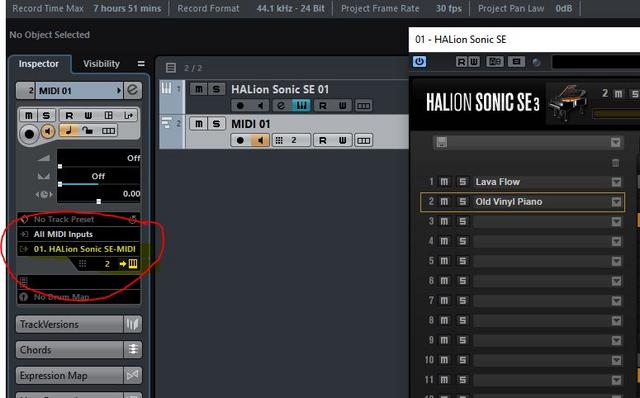 Thank your Grim for answering the question.
Another reason for wanting to do this is to group multiple instruments that are related to reduce screen clutter and to help with reusability.