Some issues with chord symbols

I am trying to get a good appearance for jazz chord symbols in Dorico 3 and encountered some problems.

Most projects I am doing are jazz, where I like a handwritten appearance, so I set the Music font to Petaluma which automatically sets the font for chord symbols and their extensions to Petaluma Text or Script.

When I doubleclick the symbol in engrave mode to edit the appearance and then select the accidental I have several choices, the second seems to be the Petaluma variant.

Chordsymbols2.png446×737 28.2 KB
2. Why is there no indication what font is used for the glyphs already present?

I choose the third (preselected) variant and doubleclick the sharp symbol to open a new editor where I can exchange the glyph for another.

Chordsymbols3.png716×771 45 KB
3. Why is in the panel where I can select the glyphs I want to add Bravura the preselected font for all categories although the chord symbol font is set to Petaluma?

For example, in the G13b9 chord I would like to have the 13 in superscript, but still in a larger font size than the following b9 alteration.

I want to enter a C6/9#11 chord symbol. Dorico turns that into C6#11add9, which I would consider wrong or at least bad practice. I can override that by editing the appearance, but again it is very annoying having to do that for every possible root.

While I understand the idea behind the chord symbol preferences I would welcome the possibility to sometimes choose differently without creating a completely new exception. For example:

In the settings I can chose for a maj7 chord between different text representations (ma, maj, j) or the ∆ symbol. I then can chose the vertical position of the text and the triangle independently. So, when I set the appearance to maj7, Dorico would still know how I’d like to place the triangle. Same goes for other chord types like diminished, half-diminished and sus.

In my opinion, Dorico should follow the settings when I enter chords with a midi keyboard, but when I enter a symbol via the text popover Dorico should try to stick to what I entered. Maybe one could cycle through different representations like one can already do with chord diagrams.

Here is the project:
Testproject.dorico.zip (1.79 MB) 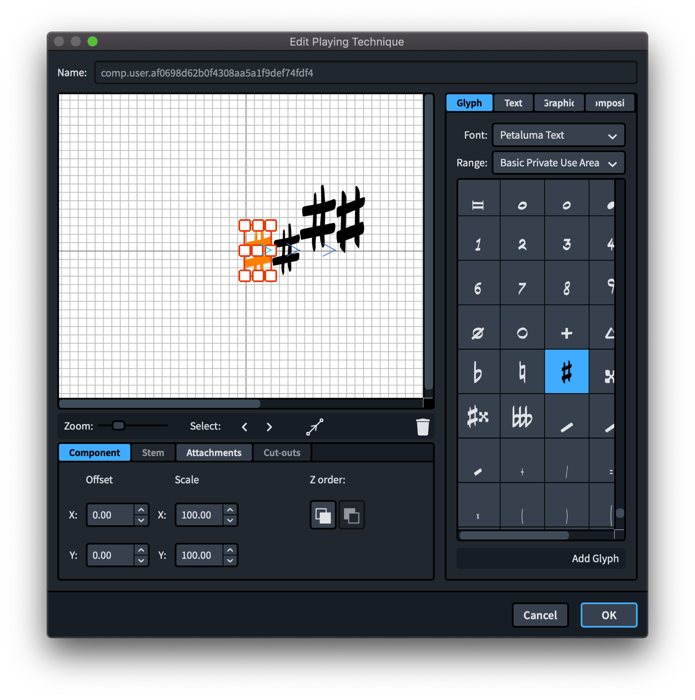 You may need to compensate for adjustments to other subscript and superscript components by adjusting this font style: 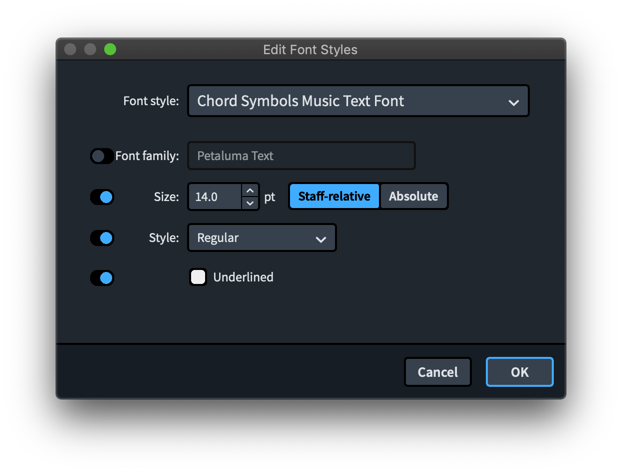 and also this Engraving Option:

I can’t answer the other points - they mostly seem to be feature requests, and I’m merely a user

Thanks Leo for the detailed answer.

I encountered another thing:

When I start a new project and add a C#∆7 chord symbol the sharp symbol looks ok (size-wise). As soon as I go to engraving options and change the main music font to Petaluma the sharp and the triangle change, even if the two checkboxes (update text fonts) are unckecked.

Generally I find it unconvenient that only one set of default settings can be used. When I open Doricos Bigband template I would expect it to use Petaluma from the start, but setting Petaluma as default music font would mean that also the orchestra templates would open in Petaluma.

And yes, I agree that most of my points are merely feature requests.