I remember there was already a topic about this years ago but I couldn’t find it, I’m sorry for that.

Right now I’m getting completely crazy from the fact that randomly, the playback of some or all of the instruments (NotePerformer) starts way louder than it should be. This happens in all files. After navigating around through some notes, this is sometimes fixed for a few minutes and then it randomly starts again. The only workaround I know of is to input all notes forte and only add dynamics last. I could send an example file to a Dorico developer if this is not a known problem (or record a video). I always work in files that come originally from Sibelius in an XML import, if that matters.

Thank you in advance if you could look into this.

If you’re able to produce a minimal case that reliably reproduces the issue, we’ll gladly look into it.

I am experiencing the same problem and after some investigation I made the following findings:

Hopefully this is helpful for both the Dorico team and @Wallander.

Thank you @Frigolito, I endorse your findings. @dspreadbury , all my attempts to create a small example have failed; apparently many flows with many bars and dynamics are needed for this bug to occur. I created a screen recording to illustrate the problem, in which I start playback 6 times, and the 3rd and 6th times the second violin plays ff instead of mp: 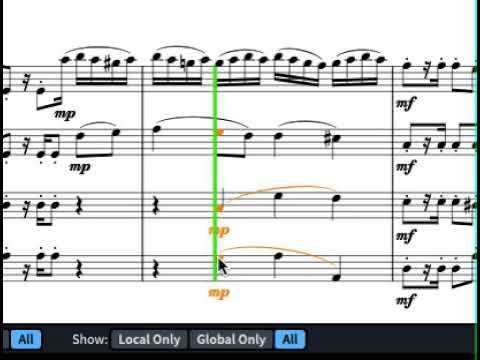 I can send you this file if that would be helpful.

@dspreadbury I know that the Dorico team reads everything and that I shouldn’t bump, but since it’s been 3 months since my latest question here I would like to ask if you had already time to look into it. The situation is that I cannot make a really minimal example but I do have this problem a lot in my longer scores. Currently, I change the beginning of the first flow to mp everywhere while working (even if it should be ff) to make it less disruptive (since NotePerformer defaults to the start dynamic of flow 1 when this bug occurs). I cannot post these files on a public forum but does it work for you to get a big Dorico file in your email to try to reproduce it? Thanks in advance!

Have you tried creating and sending a Diagnostic report when it happens?
Have you told us what version of Dorico you are using?

I’m wondering if the loud dynamics occur when playing back an entire flow without pause or if they only occur if you stop playback and then restart. I very rarely have issues with the former but with stop/start playback it happens very frequently that the current dynamic is not read correctly – what I would call MIDI chase but applying only to dynamics and not articulations. This seems to be independent of VST and there is no discernable pattern. If you do several start/stop combinations or choose a different place, the behaviour varies. It was also an issue in Sibelius so is not even Dorico specific.

I do experience some of this behavior in a very large file I am working on (3 acts-opera with full orchestra). If I stop and play in the middle of a flow, some instruments will play totally wrong dynamics, until another dynamic marking shows up.

until another dynamic marking shows up

precisely – things are corrected when there is a new dynamic marking. It does seem to be more noticeable on bigger projects.

I don’t have any insight to offer at this stage, I’m afraid. I will ask my colleagues in our testing department to see if they can reproduce it in a reliable fashion; understanding the nature of the problem will be a necessary prerequisite for any attempt to fix it.

Dear Daniel,
If it helps, I can send you the file by e-mail. Just tell me.

I haven’t yet pinned down the exact reason(s) why, but MIDI chasing of both dynamics and playing techniques is unreliable…

understanding the nature of the problem will be a necessary prerequisite for any attempt to fix it.

that goes without saying and you may not find it easy! I’ll try to see if I can get time to do some more systematic tests just in case it’s not really as random as it appears to be.

I’ve done a quick test series. Initially used the project I have been working on with VSL orchestral instruments and EWQL Symphonic Choirs. Starting playback at a point where all parts have a marked dynamic at the beginning of the bar or are not playing, there are no problems. Start one bar later and in a run of 10 repeating the same bar, around 1-4 times the playback is too loud. Short break and repeat. Every time the loud entries are in a different place in the sequence. As previously stated, dynamics correct at the next explicit score marking.

Then deleted most of the project (42’ long with 6 flows) except for 24 bars. Behaviour follows the same pattern. If some parts have a direct dynamic marking and others don’t only those which don’t are too loud. This indicates that there is not a direct correspondence between project length and frequency. On the other hand, in two different projects of different length and complexity using only EWQL SC (one runs under VE Pro, the other directly in Dorico), I cannot reproduce the behaviour at all and yet with the original project including VSL orchestra, the problem does occur with the choir and is very easily reproducible.

With chamber music such as string quartets (irrespective of library used), I don’t very often notice it but on the other hand, it’s usually apparent with orchestral works – particularly with the BBC SO it seems – though again it’s not library-specific and appears to be to mainly be related to the size of the ensemble rather than project duration.

I recently made a couple of Xmaps (for the VSL Rieger organ and also Hauptwerk) only referencing a ton of custom Playback techniques. Chasing was constantly off. The Natural technique was still in the map, but not populated, as it was not relevant in this context. However, as soon as I populated it with some controller data, the chasing worked as expected…