First of all: Many, many thanks for the still fantastic work of the dorico team and the 1.2 version!

One of the first impressions I got from the update was: Oh, no, still no possibility to get the stems of middle line notes right by default. Only very, very few scores I know would stem the middle line note up in the following example, yet Dorico still does it: 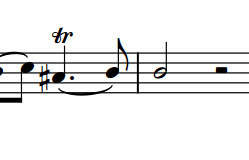 The “Stem Directions” options in “Engraving Options/Notes” do not help, since I want to use “Determine by context” and the option “Down” for the default stem direction for notes on the middle line does not override the “determine by context” option in the above posted extract. Pressing one or two keys more for EVERY single middle line note I put in to force the stem down is no option at all, it simply is a killer for me to using Dorico as my main notation software.

Since this is an absolutely crucial notation behavior which is wrong in the way Dorico implies it in general for many, many editions I am really disappointed that Steinberg announced the 1.2 update the last one which will be free for people who bought 1.0. This is not acceptable! Please change your mind about that!

I definitely won’t spend any more money just for this extremely basic option - than I will stay with Sibelius, Finale and Score and not try Dorico again. What a pity - it all sounded (and in many regards still is) so great!

Sorry Daniel for being so abrasively about that, yet I think one should be aware of that I am not talking about any sophisticated but downright fundamental feature here.

I hope I am right to write “See you again” and not “Farewell” to the Dorico forum here!

I could be wrong, but I thought this was addressed versions ago, with engraving options.

I am not at my computer at the moment, so I can’t double check to be sure.

Wolframd, the two options you’re talking about can’t be used together by design — “Determine by context” refers to the stem direction for notes on the middle line of the staff, so yes, you have to choose “Use default direction” and then you will get the results you are looking for. Why would you want stemmed groups to change direction, but not middle-line notes? “Use default direction” makes Dorico stem notes the same way that other programs do, basically defaulting middle-line notes and beam groups that “average” to the middle-line to down (or whatever you choose in the “Default stem direction for notes on the middle line of the staff.” I think the point of Dorico’s “smart” behavior is to try to replicate what old-school manual engravers would do, choosing stem direction based on the music before and after the notes in question. But if you want “traditional” computer rules, then by all means you should choose “Use default direction” and “Down” and your problems seem like they would be solved.

Thanks for your replies!

This is not related to “traditional computer rules”, but to - as you call them - old-school manual engravers rules since the beginning of the second third of the twentieth century. Only manual engravers in the nineteenth century would sometimes - not always - stem the middle line note up depending on the context. This is what I, for one, found in hundreds of scores during my professional conducting years…

Wolframd, maybe you could give some examples of when the “Default direction” leads to behavior you consider wrong in stemmed groups? At the moment, it sounds like you have very specific beliefs about what is right and what is wrong, but it’s not really possible to understand what they are from the generalities you’ve given.

Thanks again for your immediate reply! I’ll come back to that tomorrow or so since I have to leave home now - sorry!