Still no well working tutorial situation after all this time

Meanwhile I have dared to check my VST Live again, after the first releases behaved like alpha versions I really didn’t want to use. I like the concept and regard it as extremely promising once it gets going, and will be glad to use it all the time as soon as I find it reliable and well understood for my purposes.

What I miss most for restarting, is a complete video tutorial introduction series into all relevant functionality. I see NOTHING really helpful of this kind I would expect so far, after so much time has passed since initial release.

Two Steinberg videos have appeared meanwhile, and they are a far cry from any systematic tutorial apporach. Instead, they are a mixture of advertising, short functionality overviews (without proper explanation), and extremely limited and fragmented tutorial explanation.

An application with as much functiuonality as VST Live can hardly reach many musicians, soleley based on a 155 page manual, to get into it fast. And while I work my way into it, I find it frustrating to have to go back and forth between manual and software extremely often, just because still neither any easy and straightforward video tutorial course, nor at least some PDF tutorial(s) explaining basic functionality fast, seem to be in direct reach.

Instead, I will have to do the complete manual read before even getting really started, not to be suprised by not understood or unexpected behavior, take a lot of manual notes, and do a lot of learning by doing: certainly far from any intuitive fast learning curve.

Yes, but it can hardly be called a tutorial from my view.

It’s a mixed bag of advertising, flashlighting some functionality, and then some really marginal tutorial value, only in a small part of these less than 5 minutes overall.

The first two videos do not remotely rise up to the value of proper tutorials, like they do exist for pretty much everything else (including Cubase, Dorico etc.), except VST Live, on YouTube or elsewhere.

Frankly, I think that half a dozen tutorials showing all aspects of basic VST Live functionality - and I mean real, pure tutorials, unlike the first two videos - would amount to ten times better advertising success for the product, than just advertising by itself.

Nobody does better advertising and spreading news, than users really understanding and using a new product, or new users attracted by tutorials showing everything they can really do with this software in plain sight, while shile showing them they can get into using this fast.

Hi Jim, thank you for sharing your thoughts. This is Bill, who does the tutorial videos. I understand you want to see walk-through style tutorials. What are some topics you’d like me to demonstrate? If there’s specific areas you’d like help on now, feel free to post here, or DM me. The next video is more of the style you’re looking for, in which I demonstrate setting up the mixer for several tasks.

Just a proposal:
perhaps the most useful type of tutorial would be showing the complete journey from basics to a completed song setup,

I think that would be more fun and useful, than just a dry explanation of menu functions one by one. What do you think?

Hi Jim, agreed, and will do. It’s actually what is already in the works, so that works out perfectly. Over three videos, we’ll build a comprehensive mixer setup. Here’s specifically what we’ll build (below). The highlighted yellow section is a specific user’s request—if there’s something you’d like me to cover that’s not in the setup, let me know, and I’ll work to get it in there. The video will specifically make use of the latest features (of whatever version is out when the video(s) drop). 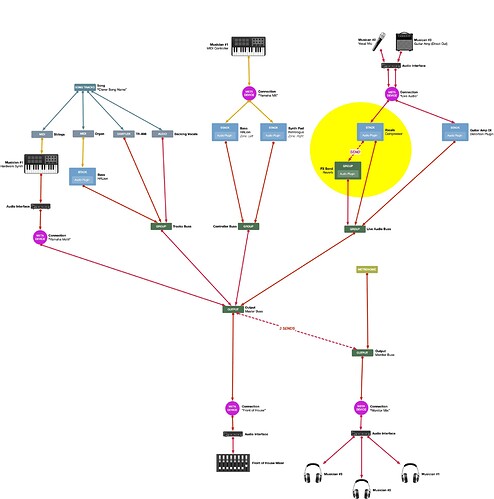 Looks good, looking forward to it.

Thanks for chiming in and showing up some promising perspective…

You mentioned a new version of VST Live just dropped. Does that mean it will be released soon?

I meant to say when the next version drops, as in there are always newer versions with more features, and that the video will have feature parity with whatever/whenever another version is released.

Hi Jim, let’s explore your suggestions. Can you expand on what you mean by song practicing—what features would you see being used, or are you asking what they would be? A video with more detail on splits and layers sounds like it would certainly be informative — let’s circle back to that after we’ve done the mixer. In the mean time, let me know if you have any questions on those topics. (Layers are covered in Mixer tutorials.)

as keyboarder, I often provided my band members with playalongs. To do so, I created a complete song structure

You can do this two ways:
a) completely done by the keyboarder of the band (if there is one), using virtual instruments and for example providing the vocals as synth melodies
b) with audio stems recorded by band members while they play along with their payalong versions. Then these audio stems can replace the virtual instruments from the original playalongs to provide an even more realistic practicing playalong (like Aebersold minus one songs).

VST Live could very well be used to organize these playalong tracks (recorded in Cubase or other sequencer software) in VST Live songs and whole songlists, managing band repertoires, even before then actually using whatever is required in Live situations.

What I mean, is that VST Live ist not just a welcome live playing tool, but could just as much beome the central organising tool for band repertore information and band practising.

Hi Jim, thanks for your explanation. Yes, that sounds useful. It would be a while before I can do a tutorial on that topic. However, if you’d like to do a quick Zoom call, I can show you how to do what you’re asking.

While we wait for official tutorials on VST Live, are there any on youtube which you would recommend? Because it’s so different to Cubase, I think we need basic how-to-start using VST Live.

Basic would be helpful