Sustain signal not working in Cubase, works in standalone...

Having a problem with my sustain pedal. I’m using AKAI MPK261, Preset is set to Cubase, and I have loaded a XML-file in Cubase so I can remote control my DAW. Sustain pedal is connected to one of the footswitch ports, and it’s function is set to “sustain” in the “Edit mode”.

Sustain works as it should in all standalone programs.

But in Cubase, sustain is not working, nor recorded. Signal is recieved, and if I go into “Edit mode” on the MPK261, and change pedal function to play/stop, then I can use the pedal to start and stop the track in Cubase. So, the sustain function is not working, but if I change the pedal’s function, it works for those given tasks.

Sustain worked perfectly in Cubase 7 Elements, but stopped working after upgrading to 8 Elements.

Since this is only an issue in Cubase, I think it’s a software problem, and hasn’t anything to do with the AKAI MPK261.

And describe us your results, please.

I feel like a dumb***, but I’m really a total beginner at Cubase, and I have very little techinal understanding of MIDI. I need a step-by-step explanation for the simplest things.

2) I made sure Controller is not enabled in the Record and Thru. I don’t know about Controller 64… I scrolled down on the drop-down menu under Controller, until I found CC64 Sustain, marked in a red circle in the following pic. Should I remove the “CC64 Sustain” from Controller?

3) Well, how exactly do I add a MIDI insert effect? I tried to read about Midi Monitor in the help-section of my Cubase, but I didn’t find a single word about it. If you see in Pic1, what should I click on? I guess it’s hidden in the Inspector to the left.

Maybe I’ve used Midi inserts many times without knowing it…but as I said, I have learned to use Cubase by trial and error all by myself, and there’s very, very much technical stuff I do not know about. That getting small things like Sustain to work is this complicated, makes me wonder sometimes… but I’m gladful for your help!

For the most part CuBase itself should ignore CC64, and just happily pass (or record it to the track if recording) it on to whatever VSTi or external MIDI device you’ve an armed track set for. It’ll be up to the listening instrument to respond (or not) to the CC64 message.

Note: The CuBase xml that Akai provides as a tutorial on their website has CC64 muting/unmuting daw tracks across the mixing desk editor! Not good!

Sadly the MPK2 series doesn’t allow us to reverse the polarity of pedals plugged into the 1 and 2 pedal ports. If you’re not running a continuous controller pedal, you could use port 3 which does allow you to reverse polarity from the MPK2 settings. I do have a nice Yamaha continuous controller pedal here that needs to go in port 3…and more than one of these ‘backwards Yamaha stomp pedals’…so, I personally get around this by setting up a global transformer in CuBase to ‘mirror’ or ‘invert’ the incoming messages as needed. After that I just toggle the global on as I add more tracks and CuBase flips the pedal messages for me in real time.
Discussed here:
http://community.akaipro.com/akai_professional/topics/mpk261_sustain_pedal_issue

Hi,
I have exactly the same problem with the sustain pedal and MIDI device AKAI MPK249 and Cubase version 8.0.30 build 536.
When I run HALION 5 separately the sustain pedal work perfectly, but not in CUBASE …
I have checked all the things mentioned in this topic.

You must always restart Cubase to see a newly connected midi device.

You must always restart Cubase to see a newly connected midi device.

On Mac, newely connected MIDI Device is accepted and redy to use immediatelly.

In the case of owning a pedal that has the ‘wrong polarity’. I have such a pedal, and my AKAI MPK2 doesn’t have a firmware setting to invert it. In Cubase…

One can correct this. Simply ‘invert’ the CC64 event with a transform filter. In the transformer, use ‘mirror’ value 2, and set the transform value to 64 (the half way point between 0 and 127). 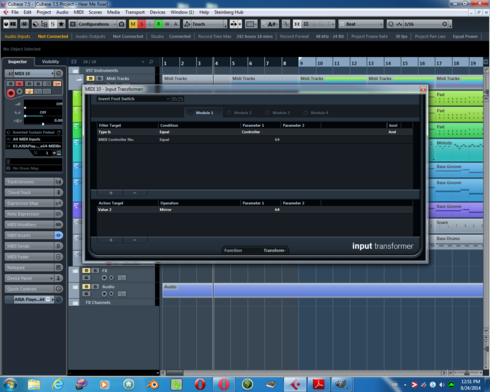 This transformer isn’t limited to ‘on/off’ controllers. It could also be used to ‘reverse’ the direction that a continuios pedal, or even a pot or fader works.
I.E.
Imagine that you have two faders side by side on your MIDI controller, and you’d like to set them up as ‘cross faders’ where pulling them up or down ‘together’ would do a crossfade. Simply ‘mirror’ the right fader from a base value of 64, and it now works ‘backwards’…

Hi. The picture of the Inverted Sustain signal in Transformer dont load anymore. Can someone repost?

Hi. The picture of the Inverted Sustain signal in Transformer dont load anymore. Can someone repost?

This isn’t a Cubase 10 snapshot. It goes back to version 7, or something…but should still be valid enough to show how to set up a transformer.

Sorry, something changed over the years with those links, fortunately the images are still at the image hosting site so I fixed it above, and here it is again:

Personally, I like to make it a ‘global transformer’, since the MPK2 is usually my master controller when working with Cubase. I set it once, and it seems to stick for good, in all my Cubase projects that way. Using this method, the inversion occurs very early in the routing, so tracks are actually recorded properly as well.

Here is an updated set of screen shots with Cubase 10 Pro, step by step of how I set it up.

This should cause an input transformer window to pop up. Choose a Module that you’re not already using. Build the transformer.

In this case, I do the CC64 mirror in module 1. Here’s what it looks like:

From now on, you should be able to easily enable/disable this same global transformer on any MIDI controlled track you want, in all future projects, by simply choosing “Input Transformer/Global” on a track by track basis as needed.

If you’d prefer all new tracks of a certain type (I.E. MIDI, or Instrument Tracks) be created with this enabled by default, then store a preset with your favorite defaults for the track type, and use that preset in the future when making new tracks of the same type.

Another note for AKAI MPK2 users…

I don’t do it this way. I resort to a transformer in software as described above since I ALSO use a continuous CC pedal in port 3, but…

Do you have a continuous pedal/breath-controller/whatever plugged into EXPRESSION PORT?

If NOT, then you can try using that port instead, and invert the events in the MPK2. I don’t know if it’ll work for all pedals, and for everyone, but it’s worth a try.

If you have a transformer active in Cubase as described above, disable it.

At this point, hopefully your sustain pedal works properly. If so, save the preset and global settings on your MPK2.

Note, if you use this ‘port 3’ method, then you do NOT need a global transformer anymore…as the MPK2 itself would be sending the proper event.