Under the direction of Dorico, the EastWest Symphonic Choirs sing The Doxology to the tune Lasst uns erfreuen, with organ accompaniment provided by Garritan Personal Orchestra. 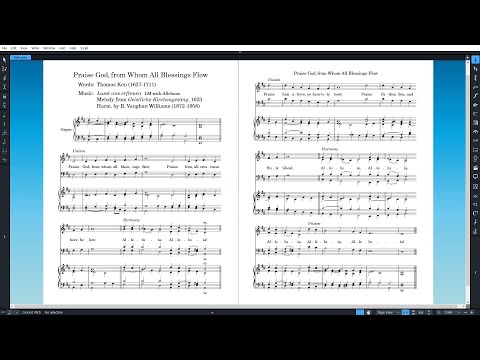 Pity the poor basses! The melody only spans one octave, but the bass part spans nearly two octaves. And every time the choir goes from harmony back to unison, the basses have to jump up an octave and a fourth.

Impressive. Is there an easy way to remove the random accents? There are certain syllables being unduly accented (Al-le-Lu-YAHHH).

I’m not suggesting you need to fix it, just wondering how easy it is to make those sorts of changes.

The loudness of individual notes can be controlled by adjusting their key velocities. The worst occurrence of the last syllable of Alleluia being accented happens just after the choir sings “Holy Ghost” when the altos are singing the same pitch as the sopranos.

I’m interested in whether you use the four separate choir sections and put up with the restricted bottom of the range for the sopranos and tenors or you mix into women’s and men’s sections. Simple harmonisation of hymns like this you can probably get away with the former but I’ve never found it satisfactory for my works using SC.

Of course areas which common to both sops and altos or basses and tenors are louder than the others so some adjustments have to be made in overall dynamic levels – but you still get these annoying emphases from time to time. Fortunately you can use three way control (CC1, CC11 and velocity) throughout in Dorico to try and get things sorted out though it can be hard work!

I always use the four separate choir sections and never use the women’s and men’s sections. This is why my version of The Doxology is in the key of D rather than Eb because the latter would make the highest pitch in the bass part out of range.

I have not encountered the problem of having the ranges which are common to sopranos and altos or tenors and basses be louder than the others; I suspect this problem only occurs when using the women’s and men’s sections. In my video of The Church’s One Foundation, I didn’t adjust CC1, CC11 or key velocities at all, but the balance among the sections seems good to me throughout.

This is why my version of The Doxology is in the key of D rather than Eb because the latter would make the highest pitch in the bass part out of range.

that simply proves the point. A choir in which the basses can’t sing higher than a D is nonsense – in most pieces I sing the basses are expected to at least be able to get up to an E. Tenors (like sopranos) should be able to manage at least a Bb – at least some in every choir as we all have off days!

If you use the four choirs set up then the issue of dynamic discrepancies is greatly reduced, though not altogether eliminated from my experience. I would be interested if you did a mockup with more dynamic variation than a simple hymn arrangement like this. It can be a frustrating choir to use but there is simply no alternative yet (the Hollywood choir I don’t regard as good for sacred music)

I would be interested if you did a mockup with more dynamic variation than a simple hymn arrangement like this.

Have you watched my video of The Shepherds’ Farewell by Hector Berlioz which I posted here? I think you’ll find that piece has more than enough dynamic variation using the four separate choral sections. I did use a digital audio workstation as the host program rather than Dorico because my DAW gives me the ability to automate changes to the audio volume coming from the four instances of the PLAY sample engine, which is the method I prefer using to control dynamics.

As a choral bass for some 45 years I can tell you that some of us love it!

thanks for drawing my attention to The Shepherds’ Farewell which I had missed from that thread. It happens to be one of my favourite carols. Although the whole thing seems rather too staccato-ish for my taste, I do think the sounds blend well here and I enjoyed it. I guess what I’m most looking for and so far have been unable to find is a fully contrapuntal choral work using SC if you happen to know of any? Obviously it would be ideal if done directly in Dorico but a DAW would also be fine.

I’m sorry, but I don’t know of any fully contrapuntal choral work using the Symphonic Choirs.

Some time ago I was a subscriber to the Eastwest composer cloud service … I tried to use symphonic choirs for Sicut Cervus di Palestrina. The result is decent in my opinion even if obviously there are many things that needed to be fixed. After this test I had canceled my subscription for various reasons but still today I would be tempted to buy those sounds and try again with Dorico. I had been using Notion 6 at the time.
[Ascolta Sicut Cervus di Fabrizio Amapane su #SoundCloud https://soundcloud.app.goo.gl/iGPiR](Ascolta Sicut Cervus di Fabrizio Amapane su #SoundCloud https://soundcloud.app.goo.gl/iGPiR)

thanks – there’s a nice sound and I like the acoustic – what did you use? I’ve sung this piece before so am fairly familiar with it. I’m not sure there is that much to be fixed though there could be perhaps more dynamic shaping. I still have quite a bit of work to do in rendering my relatively few sacred works to date (all of which were actually originally written in Sibelius but I am trying to improve on that in Dorico ) but, as you and John have shown, the choir is far from as bad as some make it out to be.

That’s great. Do you recall how long you spent on tweaks after the score was input?

… anyway … it took me about 8 hours but not continuous I think scattered in about a week. I also did a little editing, just a bit of volume balance and reverb (I used reaper). I must admit that although the result is not optimal it still has a good overall yield and certainly with time and dedication you can certainly obtain good results. It amazes me that this software is now more than ten years old and ther’isn’t currently no other software related to choirs with these characteristics. I don’t understand why Eastwest sound has never implemented and updated such an interesting product. I don’t understand why no other competitor has tried to make a similar product with such advanced wordbuilder.

I agree, it’s a real hole in the market. Perhaps recent Covid changes will spur on more development of virtual choirs!

Are you using Play or Opus?

I’m not sure whether your question is directed at Fabrizio or at me. Since Fabrizio published his rendition of Sicut Cervus in 2019 before Opus was introduced, he must have been using Play. My videos were created using Play version 5.0.1 on Windows 10.

I am also very interested in the subject because I write for choir as well. I use Hollywood Choir for this purpose. You can listen to the Magnificat and Nunc Dimittis here:
Magnificat
Nunc Dimittis

I have made these in Cubase but I would love to be able to produce this from Dorico as that is my notation software (obviously).
I see you use Play 5; would this be possible with Opus as wel? I have Windows 10 also.
I hope there will be an upgrade to these choir libraries as I can tell you I had to edit A LOT to make the syllables more convincing and as you can hear I could have done more. But enough is enough at times…
One thing I dislike is that there are certain accents coming from nowhere…also with one instance because I avoid double choirs when there are unisons in singing. .and sometimes the rhythm is not as notated or as in midi; random too fast or kind of dotted where there are two strait 8th notes. Do you experience this too?
Best! Frank

I see you use Play 5; would this be possible with Opus as well?

In this post, @Brian_Roland said that Opus VST3 does not work with Dorico but Opus VST2 does work when bridged via Bidule (at extra expense).

If you create a test project in which the women’s or men’s voices sing the same vowel sound at every possible pitch, I suspect that some pitches will sound noticeably louder than others; this is where the perceived accents are coming from.

sometimes the rhythm is not as notated or as in midi

I have encountered this problem on rare occasions, usually when a syllable begins with too many consonants.