I am sometimes perplexed when entering tempo text and the “corrective” aspect of the program. For instance, when I write in the tempo popover box “poco a poco ritard” I get “poco ritard…” When I choose the “poco a poco” option in the options window below, I get “ritard poco a poco,” which is the reverse order from what I want.

Is this just how it is in Dorico and I need to enter the tempo as Shift-X text? I looked through engraving options and didn’t see anything about order.

Thanks for your response.

I would just type ‘ritard’ and then edit the Text property of the created tempo mark in the bottom panel to ‘Poco a poco ritard.’.

The corrective aspect is just the way it works, and there’s nothing you can do about it - “poco a poco” is a property that is either on or off, and it always falls after the rit/rall/accel/stretto etc. What you can do is add a rit, then alter the Text property for it like so: 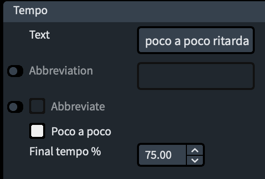 Fantastic–thanks very much to you both; I didn’t see that possibility.

Not to be pedantic but ‘rit. poco a poco’ is actually correct in that order and not the other way around, although one does see it written that way. There’s also a practical reason for writing ‘rit. poco a poco’. When I’m sight-reading and I see ‘poco a poco’, especially if it’s spread out, I have no idea what’s intended until it’s actually too late. Same with cresc., dim., etc.

Thanks, Vaughan–I’ve had a lot of conversations about order and “correct” on here, and I offer that the program should do what the composer wants, not what the program wants. The option to add a “suffix” to dynamics, for instance, is a nice step in that direction.

Dear DSL,
I understand your concern, and now you know how it is possible to enter exactly what you want (which thankfully is perfectly possible). The fact the “correct” marking is easier to achieve makes sense to me, even though I have to use the workaround now and then, because the parsing is not perfect yet…

Yes Marc, I agree, and I’m glad to see the features that add the flexibility to do this.

I still maintain that the program should allow what’s typed in the overhead boxes to appear on the page exactly as one has entered them, but I understand that this could be seen as fundamental to how the program works. The fact that there are other options obviously improves this situation.

DSL, the problem is that if you allow “anything” in a popover, you destroy the whole point of Dorico, which is that it understands the semantics of the score, not just what it looks like on the page.

I agree that sometimes it’s a pain when it doesn’t understand semantics the same way that a composer did (and there are plenty of historical examples of that, it’s not just a contemporary music thing) but IMO the answer is to improve the way it understands semantics, not to throw out the basic concept.

But if you prefer a notation program that doesn’t understand semantics, there are plenty available - i.e. pretty much anything that was first launched more than 5 years ago.

You could also ask if Dorico should [readily] allow entering elements which, strictly speaking, aren’t correct. ‘Cresc./dim./accel./rit. poco a poco’ are good examples.