The Future of Figured Bass

Oh man, to preface, I indeed must offer the obligatory praise-of-new-update acclamations; it really is a great one. The search, global v. local properties, and pitch-before-duration features are all going to save me so many hours, albeit keystrokes at a time, but still definitely hours.

(I’d also like to add a second preface to offer apologies that this post has turned into a novel. I clearly have a lot of time on my hands, and we can’t really say that Dorico isn’t at least partly to blame for that)

I’m also definitely loving the figured bass feature and am looking forward to digging in some more and getting it into some scores. That said, I do have some thoughts and ideas about aspects of the feature that could be expanded upon at some point in the future (however far), which hopefully would be of benefit to others besides just myself. These first two I think are pretty reasonable at least.

These next two are much less pressing in my mind, but worth mentioning at least.

For the rest of this, I know I’m getting a little into the weeds, so file any of the below in whatever receptacle best suits them… But the following are just a few examples of cases that Dorico can’t handle without workarounds, some of them more easily than others: 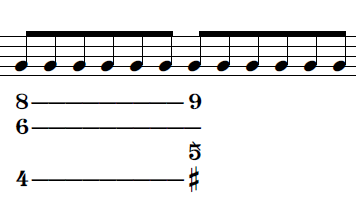 This resulted from the voice on the 4th resolving to a divisi 5 and 3. If one were to get rid of the divisi and just keep it as three figures, Dorico would indeed put a space between the 9 and the 5 without a workaround, so that’s nice. If the divisi must remain though, the space between the 6 and 4 is not possible. One alternative would be to mark the 4 twice, but at that point, I’d want to be able to put the second 4 in parentheses, which is obviously not possible.

This next one above’s obviously not standard, but I’ve seen at least one example that could vaguely be construed as precedential:

(only vaguely construable as it’s from a continuo-playing treatise, not actual rep, but it indicates that the principle would at least be understood)
Obviously, this one is pretty easy with shift-x text, but that can break with version updates and keeping things in the proper tool is always preferable to not (tbh, a big reason for making this post is that my aforementioned neo-baroque opera basically needs the figured bass redone from scratch as it was all done with shift-x text in v1.1 and 1.2—I would’ve loved to have used Figurato, but as wonderful as it is, it also can’t handle these extended use cases).

Now this next one above would definitely be possible if numbers higher than 9 were possible. But if we imagine that in lieu of that, we might try consolidating the octave to work around it, that presents its own problems:

Out of all of the odd examples I’ve listed here, this one is the most… faff-y. Suspension chains in the middle of the figure stack aren’t natively possible because Dorico doesn’t actually do suspension chains, just several individual suspensions strung together where certain figures have non-zero duration. This, however, only works when the suspensions are at the top of the figure stack, since figures alone always occupy the top of a figure stack (unless I’m mistaken EDIT: seems I was somewhat mistaken; see below). So that aspect requires some working around (moving the 6-7-8 down from the top position in engrave mode and the editing the individual extender lines, but this second part has to be done half in write mode, half in engrave mode, because…). This can create a second issue, which is that when, in write mode, the extender line for the b7 goes past the second b7, it erases that figure, since Dorico insists that two identical figures in a suspension chain must be consolidated. This is remedied by only partially extending the lines in write mode and extending them the rest of the way in engrave mode. The alternative would be putting a different figure (1, or 0 for instance) in the second b7 slot, and changing the music symbol glyph—not really recommended if you need those other numbers in the same document.

Anyways… I reiterate my apologies that this post turned out so long. Really, the two biggest issues for me are the two I listed first, as remedying them would mean that even with workarounds, essentially most every problem I’ve mentioned here could be worked around from within the figured bass tool, instead of having to resort to text or lyrics or whatever else. I am very impressed with the tool, at least as I’ve used it thus far, and it really is wonderful to have true native support for this at all. I’m definitely happy, and with just a few slight tweaks I would be absolutely ecstatic

Thanks for your feedback, Matt. We’re certainly thinking about extending figures above 9, but we weren’t thinking about going up to 17, I must admit. I’m not sure what would be involved in adding further rows of figures, but certainly it’s not trivial. In any case I’ll pass all of this along and we’ll see what might be feasible to add in future versions.

Matt, I do wonder (and forgive me if I’m way off base—it’s been quite a while since I’ve played any fb) is it really necessary to have such high numbers? I’d imagine that to be a nightmare. The point is to spell out the harmony of the chord, not the voicing per se (beyond the normal inversions). I thought the whole point was that it was all extemporized by the player. I can’t fathom anything over 15 (12 more realistically) being truly prudent, although I’m certainly open to correction by those who live in this world more than I do. I would expect that if that level of control was desired by the composer perhaps a more thru-written part would be provided.

Well, that’s certainly a much more optimistic answer than I was expecting, all things considered!

It’s true, 17 is likely more than a rarity, but that there’s like my bread and butter—ultra-niche musical notation problems.

If it makes you feel any better, I don’t think it’s ever crossed anyone’s mind to try to notate any Vicentino scores with figured bass, nor would I be inclined to be the first

Hmm… that’s certainly a good point, Romanos. While I certainly can’t claim to be an expert, in my research for my aforementioned dissertation (which, more than just neo-baroque, is specifically neo-turn-of-the-17th-century), I found quite a lot of material from that time period where figured bass was not so settled. In terms of such high numbers, this is often (maybe usually? maybe only?) the case in choral music where a keyboard player would be accompanying the vocal parts and might need to know specific registers in which to place certain figures/intervals. While that’s not the only context in which I’ve used high numbers in my own music (though it often is), it generally is motivated by the same considerations, where register is non-negotiable.

For instance, I occasioned sometimes to need flat-10 in the same figure as nat-3, which has some amount of precedence in the baroque practice of 11-10 suspensions with a simultaneous unresolved 4-4 suspension. Now, in that case, it was generally a performance practice thing, so I don’t think you’d find 11-10/4-- in any score, but I imagine if it were in fact explicitly written in an early figured bass score, it would be perfectly understood, since it was a thing that was played. That’s been my aim in my own use of extended figured bass—while my vocabulary would certainly be foreign to someone from the early baroque, to the best of my understanding, the notation would have been comprehensible.

…which, I suppose, doesn’t necessarily directly address your point about practicality or prudence.

To that end, I’d have to say that… well… I don’t write always the most practical music. The main role in my dissertation is a castrato.

Just to say that in general you can have suspension chains in the middle of the stack. You can’t get your particular example, I think because it requires the same interval showing up twice, but something like the attached is possible.
suspension chain.zip (340 KB)

You can still use Figurato, the old ‘workaround’ font, in Translation Lyrics, for extreme cases. Then you just need to set Figurato as the FB font to match. Set the Figured Bass Text Font to Figurato, and in Engraving Options, use Plain Font.

I love that piece!

Richard, that’s super handy; many thanks!

Though, yes, you’re right, depending on what specifically is desired, certain things aren’t possible in write mode alone.

This particular one definitely works in engrave mode though, so not a huge issue.

And Claude, the Rebel is complete with out-of-order figures to boot! How nice