Hi all,
is this possible to achieve with a real tie (a tweaked slur in the image)? 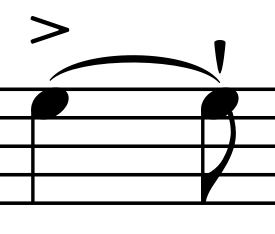 That’s the default result for me when adding the corresponding articulations to a pair of tied notes, is that not the case for you?

Ah. When I apply the articulations to the tied note, I get that result too. But if I tie two notes, one with accent, one with staccatissimo – the staccatissimo will go away. Solved, thanks!

The reason for that is in Dorico, tied notes are “really” just one note that appears as a tie chain if needed, based on the meter, its position in the bar, etc. If you tie two notes together, what’s happening is the 2nd note is being absorbed into the 1st, and therefore any properties or attributes unique to the 2nd are overwritten by the settings of the 1st.

Re-adding the staccatissimo after tie-ing the notes would bring it back, of course.

One could argue that the point of a tie is that there is no new attack and so putting staccato etc on the tied note is odd. But a lot of people seem to do this. The question is, how is the player to perform this? I believe it is quite ambiguous, and therefore not totally clear. You can’t make the tied note staccato, so how long is the duration for the first note? You can notate this other ways.

I think putting accents on notes in tie chains is valid though, because strings can do that.

Now that I have said this I’m sure people will chime in with a dozen examples from Bruckner or Koechlin!

To me a staccato dot on a tied-to note indicates shortening by the same amount as if notes were not tied, just without rearticulating.

I disagree. A staccato implies an attack. And even if you disagree with me, that is further proof that is an ambiguous notation that is open to different interpretations. And let’s not forget that the Italian word ‘staccato’ means ‘detached’, which is different to ‘shortened’.

shortening by the same amount as if notes were not tied,

Perhaps, but that amount may not always be 50%. A staccato on a note of aggregate length semibreve would never be played of length minim. As @Andro correctly observes, the staccato dot simply means detached from the following note. It does not specify by how much it should be detached.

I really don’t care about the details of Dorico’s playback of this. That is another thread.

I’m not referring to playback, but performance practice.

Neither Bruckner nor Koechlin

In the example there are obviously slurs and ties, having the same pattern with the wedge on the second note. Ambigous to say the least… I guess it gives some room for interpretation. Personally I would not choose to notate like that. Andreas Randel (6 October 1806 – 27 October 1864) was a Swedish composer and violinist. The overture to his The People from Vårmland was recorded by Kungliga Hovkapellet Stig Westerburg. Randel got his last name from Ramdala parish; he was originally called Pettersson. He worked as a concertmaster at the Royal Swedish Opera, regiment musician and was a professor at the Royal Swedish Academy of Music when he died. Randel learned to play pole shoes and hymns on a violin he got from a wandering pla...

Mine may be a non-conventional reaction, but I would interpret the tied quaver with wedge to mean an abrupt termination to the note, almost accented. (I seem to recall composers who intend an untied version of the note to signify a very short accented note.)
David

In vocal writing, Gould suggests a tied note with an accent or stacatissimo, as a means of indicating an emphatic final consonant. (p. 453)