Tip for working out the range (ambitus) of a player

I don’t think I’ve seen this mentioned to date. Select the notes where you want the range and look at the Keyboard in the Lower zone (Write mode). Below is an example I’ve knocked up.

I’ve used this a lot today on a piece with multiple players and flows. Select the first note of a player and use Edit > Select To End Of Flow. Repeat for next player, and the next player… Repeat again for each flow. Keep a careful note.

Maybe one day this will be automatic! 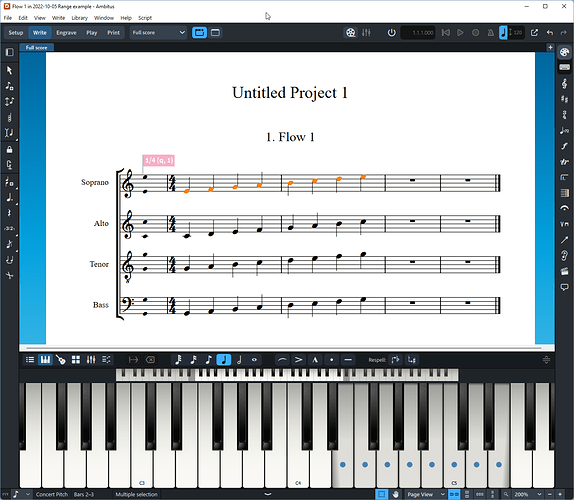 Not sure I quite understand the significance of this.

Is it the case that you’d follow this technique, and the resulting keyboard display would show you out of range notes for a particular part, eg Tenors going above G above middle C.

(I’m currently endeavouring to sing the Tenor part in Durufle’s Requiem, and some of the notes are a tad too high. I’ve noticed the same for the Alto and Bass lines too. They’d no doubt be OK for The Sixteen but for amateurs it’s a bit of a struggle. Dorico shows the notes being problematical by colouring them a feint shade of red, getting deeper as they go more out of range. What would be nice is if these note properties could be set somewhere, eg any notes above E above middle C defining the problematical notes for the Tenors. Then, depending on the capability of the choir in question, it would be easy to see which notes are iffy for a particular piece.)

Rob, you’ll see that the very first thing on each staff is an ‘ambitus’, which shows the extreme notes used in each staff. You can then decide who gets to sing it on that basis. This is often used in Early music, where the part might not be labelled usefully, e.g. “Quintus”.

Chris’s method lets you discover the highest and lowest note in each part, in order to create the ambitus.

Ah ha! I’d often wondered what that column was for, now it makes sense. Thanks very much Ben.

Speaking as a tenor myself, I must say that if you find anything higher than an E above middle C too high, you should probably be singing baritone or bass! A great many (most?) tenor parts hang out in the range of the G below middle C to the G or A (or even B) above.

Nevertheless, we will in due course allow you to edit the playable ranges for instruments in future so that you can tune them to your heart’s content.

You’re dead right Daniel, I’m a fraud! I should be in the bass section. I’ll switch I think, and save my voice.