I’ll apologize in advance for any beginner mistakes I may be currently making or will be making in the future. I’m a home user recording my own stuff figuring stuff out as I go along.

My question is this: I’ve been bringing my tracks into a studio for mixing/mastering. The studio uses Studio 1, so at first I exported all my tracks through “audio mixdown”, but this doesn’t include automation, and I do a lot of volume automation that would take forever to recreate.

Then I found the aaf export which brings the automation with the tracks. This was great, until I realized that it doesn’t bring the group tracks. I record my guitar amps with 4 mics, and use a group to control the volume of all 4 tracks at once. But the group info doesn’t export, just the individual tracks.

Any advice to fix my problem? How do I get the group tracks to export with the rest? Or do I need to set things up differently?

I would use VCA faders instead of Groups. That should work.

I gave it a try, set up a vca fader and it works just like a group track. However, it doesn’t show up for export as aaf or under the audio mixdown…

Sorry, I was thinking, your goal is, to export the source Audio track with all the volume changes.

I don’t see the point to export the Group submixes in this case.

Do I understand you right, the Volume automation had not been exported when export the Group Channel?

If I use the aaf export then I can get all the volume automation to export with each audio track. But the group tracks don’t export.

If I export as aaf I get the audio automation but no groups and therefore no group automation.

If I do the audio mixdown export then I can export groups, but I get no automation at all.

I tried to reproduce it, but it works as expected here on my side. See attached screenshot, where do you see the project, it’s routing, the Export Audio Mixdown settings and the result.

This is what I did:

RESULT:
I can hear (and see), the Volume automation of the Group Channel has been exported. 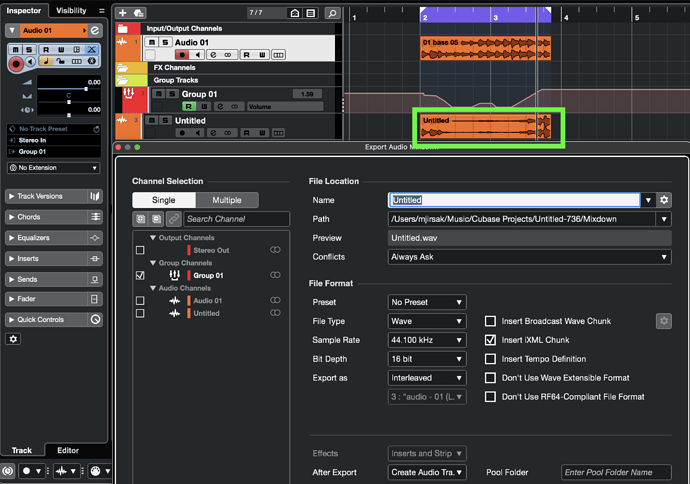 Thank you very much for your help. I was exporting the group tracks and looking for the automation the way it was presented in the song, not expecting the automation to be incorporated into the track itself.

I copied the way that you did it, and still didn’t see the automation, until I looked at the image you provided of the imported track (untitled) and then I saw that the volume automation had been incorporated into the track itself. That was not what I was expecting, so I didn’t notice it until you pointed it out.

Anyway, this provides a new dynamic for me in my quest to figure out how to get my tracks to the studio without losing all the work that I have done to them in terms of the automation. Thanks again for your help. Hopefully this allows me to accomplish my goal.

What do you mean by this. Could you please add a screenshot?

I’m struggling a bit to understand what you are trying to achieve.
Are you trying to export the actual automation data in order to import that into a different DAW? If so, that will not work. Automation data is DAW dependent and afaik there are no standard formats for importing/exporting it.
When using Audio Mixdown the automation is printed to the resulting audio file.