A bug that I have found in the project logical editor (I use Windows 11) :

The workaround is to restart cubase to be able to see the new preset in the list.

Well, the preset is in the list, but maybe it’s hard to get to. This is part of some new issues with the PLE, after it was improved in other ways. Not a bug, really.

I performed your repro steps:

I don’t know what you’re trying to say, sorry.

I simply followed the exact steps you provided.

I simply followed the exact steps you provided. 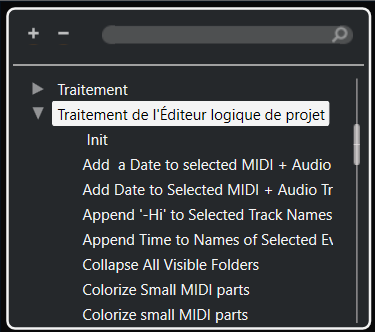 Are you using an online translator? If not, please do.

I already use a translator. What do you not understand ? The GIF with the repro steps that I made above is not clear ? 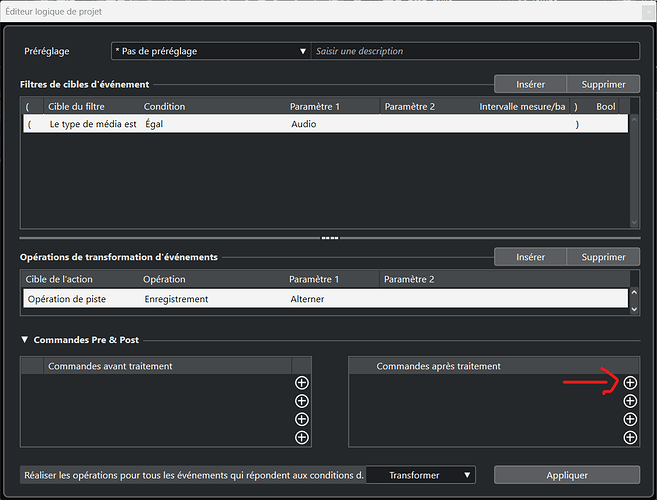 I need to trigger another preset from the project logical editor after the current preset is opened in the editor. For that, I clic on one of the 4 “+” buttons. In the list that is opened, I can’t see my new preset previously created. The new preset should be listed in the tree after clicked on + button, in the list “Traitement de l’Editeur logique de project” (the translation is probably a thing like “Treatment of logical project editor”.

Is it more clear ?

But I still I cannot reproduce what you are seeing.

For me, the preset created in step 1, is available to add from the post-commands list when I get to step 3 of your repro.

Have you tested in Cubase Safe Mode to in order to exclude corrupt preferences problem?

It was a good idea : I used safe mode by disabling one time my programm preferences. I re-tested and now I can see the new preset in the list.

But it is very strange because I restarted cubase with my “normal” settings after that and now, it works although I did not delete my programm preferences

In all case, thank you for your help.