By “voice cloning” I mean the process of analyzing an existing recording of a human voice and then applying the characteristics of that voice, the formants and ‘sound’ of that voice etc., to a target file or set of files.

I’m willing to bet that in audio post-production this will be the next major leap forward in terms of dialog editing and maybe even ADR; far faster than editing is re-reading and applying tonality to a new recording, assuming of course our performance is similar to the talent.

I think something like this included in Spectralayers (and thus in Nuendo through ARA) would be a really big advantage over the competition.

I’d be interested in hearing if people think this would be a good addition.

PS: I’m thinking of technologies such as machine learning to accomplish this (and please, if using a GPU for this, allow it to run on AMD, Intel and Nvidia)…

Adding a tag for #nuendo people…

I’d be interested in hearing if people think this would be a good addition.

Outside of the use cases you describe it would also be great for sound design.

+1 This would be amazing!

Could be a massive hit on the deep-fake market …

Though I think they probably already have or soon will have those tools readily available. As a matter of fact I think some in our (post) industry already use some other companies’ solutions, it’s just that it’s currently clunky 3rd party solutions without good workflow integration.

Sooner or later other DAWs will have this. Or iZotope RX. It’s just a matter of time.

Big +1!!
This could be incredibly useful, nefarious purposes aside… or possibly including ‘nefarious’ purposes, depending on your viewpoint

I’ve already seen something like this, I cant remember where or what it was called, but what I remember was that they didnt use formants, they used something like “Voice profile” where they took the vibrato/tremelo(each harmonic of the voice) and built a “Voice Profile”.

Not really sure if this would be suitable or appropriate for something like spectralayers because it is focused more towards “spectral editing”.

Not really sure if this would be suitable or appropriate for something like spectralayers because it is focused more towards “spectral editing”.

I’m usually using RX for various reasons, but I seem to recall that there already is a tool for matching tonal balance, like an analyzer that sets an EQ curve or something like that. I think this is sort of an extension of the same thing conceptually (not technically).

But sure, if it existed as a plugin / offline process that too would be great. I’ll perhaps clone my request to the Nuendo forum…

Human perception of speech is MUCH more acute than for other sound sources such as musical instruments. Resonances from skull cavities, chest etc all giving clues to size, shape, age and even health of the speaker.
These factors all make a task like this significantly more complex than a simple “tonal match”, but probably not impossible given enough raw data about the original voice. If you try shifting the formants from an acoustic guitar recording you can go quite a way before it stops sounding like a guitar, but even a slight shift in a voice will make it sound like a different person.
I suspect this kind of processing would require a whole new dedicated software application.

These factors all make a task like this significantly more complex than a simple “tonal match”,

Yes, I used “” to make clear I’m struggling for an appropriate technical term for this.

I suspect this kind of processing would require a whole new dedicated software application.

It essentially already exists and I think it simply uses machine learning. I mean, I don’t mean to say it’s “simple” simple, just… you know, it already exists.

Hello MattiasNYC,
If it already exists I’d be VERY interested to find out more about it. Do you know the name of the software or who it is produced by ?
Thanks
Steve www.redtapemusic.net 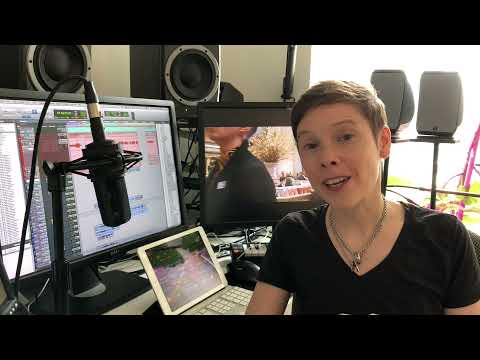 Thanks Mattias, I hadn’t come across the ReSpeecher software before, very interesting. However as Abigail explains in the video, she is not emulating the voice of another person in a convincing way, but altering her own voice to sound like another person, of a different age or gender which is far simpler task, and doesn’t require the copying of phrasing, intonation, accent etc. The formant shift required to simulate change of gender or age is widely available in lots of software like Melodyne or Cubase’s vari-audio etc.
S

If I have speech in a TV show and it’s a frankenbite, then an integrated tool like this would be perfect. I could simply record what the person is saying with my own voice and if the person’s voice has been cloned my voice would be altered to sound like that other person. The gain here is that I don’t have to deal with nasty edits that barely work, if at all.

As for the video you could imagine her using a cloned voice of Morgan Freeman for example, substituting words as needed in a movie. She’d just record herself saying what the director/producer wants Freeman to have said, and then applying the “Freeman” preset. Now it sounds like Freeman said what they wanted. You’d never know the difference.

Fair enough, you’re right, I didn’t explain that very well. I was thinking of the difference between "altering my voice to sound like someone who is not me, but no specific other person, (which is what Abigail is doing, and can already be done quite easily) and altering my voice to sound convincingly like (for instance) Leonardo DiCaprio, which is a very much more complicated task, involving the emulation of phrasing, accents, differing pronunciations, breathing patterns, fricatives and phonemes etc etc.
I don’t know of any software able to do that convincingly…yet !
S

Ahhhh Okay, I see what you’re saying. So you want this technology to be licensed to use within spectralayers? That would be cool to see but I highly doubt Steinberg would be able to acquire an exclusive license to this technology as the developers seem to already have been working with big budget hollywood studios (and most likely want to keep their technology open to those hollywood studio production companies).

This would be cool to have Steinberg get the source code for this technology and incorporate it into spectralayers, this would definitely put Izotope to shame.

As of right now “Spectralayers” strength is it’s toolset and I believe if Steinberg invests into more toolsets (features) then it can put it 10 years ahead of Izotope or any other spectral editing program.

Ahhhh Okay, I see what you’re saying. So you want this technology to be licensed to use within spectralayers?

No that’s not what I said. I used that company and its tech as an example of how this can be implemented in practice. That’s all.

No that’s not what I said. I used that company and its tech as an example of how this can be implemented in practice. That’s all.

Exactly! Thats what I meant. Thats why I mentioned that the original developer of “Spectralayers” is highly skilled with Machine Learning/A.I. and something like this could easily be implemented within “Spectralayers” with his expertise. I mainly referenced Steinberg licensing this technology to point out its a good idea and make the point that they(Steinberg) are the ones responsible for the new features. If you dont know “Spectralayers” was once owned by another company before Steinberg bought it, so it is up to Steinberg to decide how much further they want to develop “Spectralayers” and invest into it. Also I more-or-so suggested for Steinberg to license this technology, maybe as an idea (reference point/rough draft/blueprint) so they can learn from it and create something new or their own technology that makes sense within “Spectralayers”. The idea behind “Spectralayers” is that the main developer intended for it to be like the idea of “Adobe Photoshop” but for “Audio editing”. However “Adobe Photoshop” is lightyears ahead compared to “Spectralayers” with its editing capabilities. I remember the days when “Adobe Photoshop” was growing in popularity and people used it to create memes and females were heavily editing themselves with large breast and calling themselves “natural” and people would used to say “ohhhhh that’s definitely ‘Photoshopped’, that is not real”. Thats where the term “Photoshop” came from (because of it’s nature into creating something that is not real). It would be cool for Steinberg to heavily invest into “Spectralayers” so much where people would use it to create content. It would be cool if “Spectralayers” becomes so advanced that I could hear The President’s voice saying something like “I would cum all over her so fast” as “leaked audio” and the fact checkers would say something like “ohhh that’s fake, they’re using ‘Spectralayers’ to do this. It’s not real”.

Again, this technology(“Respeecher”) wouldnt necessarily be appropriate for something like “Spectralayers” (because it’s a spectral editing app and not “voice synthesizer”). Thats why I hinted that for this technology to be implemented within “Spectralayers” the feature would have to make sense and fit within the realms of “Spectral editing”. So for example, the feature would have to make sense within “Spectralayers” and could be implemented as “Voice Profile” where you can insert someone else’s voice into a classic “Frank Sinatra” song and adjust certain parameters (such as consonants, vibrato/tremelo/harmonics, syllables, speech patterns, speech recognition, sources/ etc).