Not sure if it’s ok to create a new topic, but the situation is slightly different
In my case, the Get HD Files button after a while simply ceases to be active (dimmed) and im see “0 HD files”. But sometimes (!) Restarting N11 or deleting and recreate the Performer rec track.
There is also an strange situation with the fact that having only one microphone input on a remote sound card, I always have a Performer rec track in a stereo format 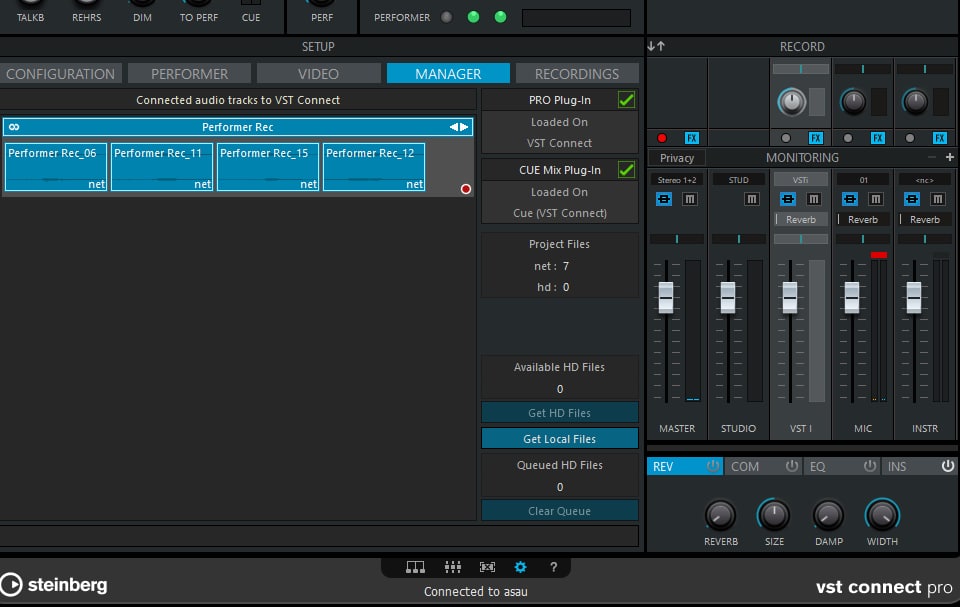 PS
I would like to understand in what quality files are written there “net” format?
And can I be sure that all session files are saved locally on a remote PC with a Performer and in which folder should I look for them?

We will look into this, seems wrong to me. For now, answering your questions: remote PC should store recordings as long as the according channels record enable is engaged. Files are wav format in 16 or 24 bit depending on Performer settings.

thx, and i want to inform you that the last two days have been intense remote work on ADR and there has not been a single major failure of the program, which is very cool. At one moment, the next day, I found a events (HD files), which turned out to be empty (without any signal). But this information was not essential and I hope this will be corrected. HD Files loaded well. Thank you for the interesting product, I don’t mind the money.

Great, good to hear it worked out for you. Happy holidays to all of you and stay healthy!

Hi even though our VST Connect Pro 5.5.20 recording part of the session went well, the transfer of the HD files is a nightmare. It fails with bad connection constantly (and I also notice it keeps the live audio streams going! slowing down the transfer)
The transfer is too sensitive to connection conditions. It should be using file compression with error checking automatically like any download manger would do. Alleviating error loss or functional failure (I get this which stops it) with inconsistent connections. We shouldn’t have to be there re-initiating the transfer every time there is a hiccup in the connection.

Also I’ve noticed that the 2 smaller (few mb) files that I did eventually get though, had dropouts in the audio that seem to correspond with the connection lost while transferring. This suggests to me that VSTC isnt even using compression or error correction at all during HD Transfer.

I notice that some users incl. @musicullum is just saying to forget using HD Transfer and get your talent (who often arent up to it) export the compressed, join or create a new secured shared folder upload to your choice of cloud storage and share.

What is the point of even having “Get HD Files” and advertising this feature if its doesnt work?
It should be : the Artist allocates a gdrive or dropbox synced folder that can be exported to, by default. From then on engineer presses Get HD Files and all this happens in background.

We are working on exactly such solution. However that is a change of paradigm, because VST Connect is per se a pure peer-to-peer solution. As such, it does require a stable and loss-free connection. Also a paused file transfer should pick up as you requested with the latest versions.
A checkox to disable audio/video streaming during HD transfer is a good idea, we’ll check to implement it.
Dropouts in HD audio should not happen at all. This indicates too small a buffer size at the Performer end, pls check that.
We continue to work on improving HD transfer by adding a server based solution, unfortunately, while this has been solved technically already, there are some pitfalls associated with that which we need to solve first.
Make sure not to run background services or browser/email etc which can interere with network traffic in the meantime.

Thanks for the reply. How is the Get HD Files transferred? Is it via UDP or other protocol other than TCP or FTP? That would explain the lack of accurate offline error correction or the ability to pause/resume many times without errors.

The Performer side is a 2019 iMac with Catalina running Presonus Audiobox iOne USB2 at 1024 samples buffer. The studio side is Windows 10 Pro latest with i9 9900k/64GB on its own VLAN. Studio connection is NBN 50Mbps max running typically at 100 - 350kbps upload according to VSTC (seems low and could be due to UDP broadcast rather than TCP). Both using the latest of Performer and Pro 5.5.2x downloaded yesterday.

I managed to get the talent to export and upload the files in her unpaid time after my 2 hours of attempts to “Get HD Files” failed dismally. She wasn’t happy about it and being so tired after the session couldnt get her head around it really. We got through it. But I’d imagine this kind of thing happens a lot and it would be good if the engineer can do it all robustly without the talent having to do much at all. Perhaps just accept a gdrive/dropbox folder share email. The rest we do without their interaction.

Regarding the corrupt HD files. The first few smaller files that were obtained by restarting the interrupted uploads of Get HD Files multiple times, did have gaps in the audio. Where as the files that eventually came by exporting and uploading to gdrive then draging and dropping, were fine.

So I dont know. The Export for Get Local HD seems like a better safer transfer process (probably because its TCP/FTP based using robust algorithms) that should in essence take the place of Get HD Files and be improved upon to be one button. And it sounds like you are developing that so thats great news.

Sidenote 1: But…the Get Local Files import to the project with automated timeline sync didn’t work later! I pointed to the resultant unzipped downloaded folder where it was happiest (not spitting out an error, contained the xml file) but at that point of loading it did nothing. I had a look at the Recording tab and there were no longer any media files listed there. So there was actual reference data loss! upon returning to Get Local Files later.

Sidenote 2: The wav files (with long but manageable names) that came straight from the exported zip would not load into Reaper. They reported zero length and came up with error. At this point I was really worried the data loss was extensive.

But then the files did drag and drop in to the Nuendo project from the media bay, albeit out of sync. So I guess only matching version Cubendo can open them, and only from the correct project, yes? I did have encryption engaged. Is this what happens, does encryption also affect offline exported wavs? What else should we look out for here?

Transfer is UDP as with all data sent and received so far. There is error correction as well, but audio/video might get in the way.
“without the talent having to do much at all.” - there is an ‘Export for local HD’ function in the Performer settings. This creates a zip file for the current project (must be connected) which Studio can extract and present to VST Connect plugin ‘Get Local HD Files’ (not connected). Did you use that? As said, we cannot yet send that via server but you can use any transfer method. So, “exporting and uploading to gdrive then draging and dropping” is not necessary.
Connection speed is rarely ever of concern, data delivery in time is. Netflix can buffer 10 or more seconds, we can’t.
“corrupt HD files…did have gaps in the audio” - given that your manual approach provided no such errors, that should not happen. Do you remember if it picked up where it went wrong, or if it started from the beginning?
Ah, so you did use Get Local. Most probably, “but at that point of loading it did nothing.” is because you had already downloaded those files at least partly. If it finds a file to be transfered is already exsisting locally, it won’t bother to replace it. You might remove all those (“HD)” files (possibly save it somewhere) and also maybe use a project saved before you started the ‘Get HD’ function. If your manual approach worked, this should work just as well.
" But then the files did drag and drop in to the Nuendo project from the media bay, albeit out of sync." Performer HD files do have a broadcast header with the origin timestamp though.
“So I guess only matching version Cubendo can open them, and only from the correct project, yes?” All VST Connect 5 versions (and probably even version 4) should be able to import via either method. Of course, it can only cope with files for the given project.
“does encryption also affect offline exported wavs?” - No.
I hope this answeres your questions. We hope to get those improvements to you soon, but note that there have been many successful productions done this way so I’d continue to look out for other networking applications running in parallel to VST Connect (often with the not so experienced Performer).