What are these red rhythm flags trying to tell me?

These flags show up in my score, and I don’t see what they’re telling me is wrong. For some reason, the bar line between 66 and 67 was missing, and one of these flags was there. I’m not sure how that happened, but I added the bar line manually. Now, though, it sure looks OK to me, and there are two of the flags. What do they mean?

Also, I’d expect the quarter note in measure 67 to be notated as two eighth notes tied. Is this connected to the red flags? How can I change that? 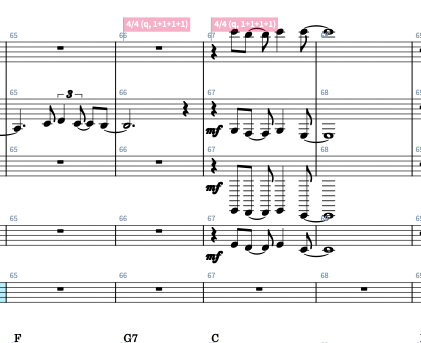 It probably means an explicit barline. To get a barline back to Normal, do not add a regular barline. Instead, select the barline and press delete.

When I do that, I wind up with an 8-beat bar. How do I get Dorico to put the bar line back in? 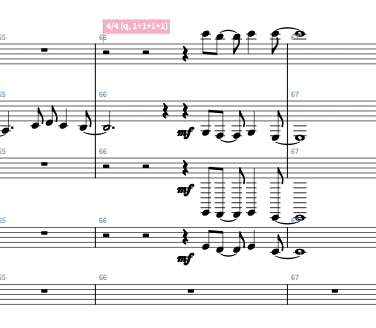 Select the red signpost and hit delete. That should do it. Looks like you have barline overrides in multiple places.

Thanks! That did it.

In case it’s helpful for anyone else, a variety of ways of describing signposts should bring up relevant results in the Dorico 4 manual, including “red flags”.

Can anyone shed more light on this situation, where you have a signpost that might signify a hidden time sig or an explicit barline, but you can’t tell which until you try deleting something? Is there a piece of info I’m missing somewhere?

If there’s not something I’m missing, I think this should be made clearer for the user.

They’re one and the same, really – if you input a normal barline, creating a “barline override”, you’ll notice that when you select the resulting barline, the “Hide time signature” property is set for it. Deactivating that shows a time signature, matching whatever the prevailing time signature is at that position.

I understand how it works. I am asking whether there is some way to tell the difference between the two by inspection without changing things. I assume there isn’t.

No, they look the same, and I’ve found it sometimes takes some trial and error. Relatively painless though.

I notice that the Barlines section of the right panel highlights the barline type even if it is not an explicit barline. I would expect the ‘single barline’ button to light up only if it is explicit. That would help a little.

I am harping on this because so many new users will continue to be confounded by it.

Part of me might agree with you, but the “new user” argument (more than occasionally put forth by various sources) also implies that new users cannot learn or are just incapable, neither of which , I expect, is the case.

At a certain point (not sure exactly where that is) this " I already know, but on behalf of the new user" argument can start sounding like virtue-signaling. Dorico is not exactly entry-level software.

Isn’t there a way he could of just deleted the red flags in the first place? There was nothing wrong with the resulting measures after he added the Bar Line.

Perhaps, it’s the way he added the bar line that caused it? I’ve tried insert, but that can easily screw up the music to the right of the insertion point if one is not careful about how the insert is applied.

It would be nice if the signpost on a pickup bar showed the length of the pickup.
At the moment they are indistinguishable from other meter changes.

Derrek, I take your point about virtue-signaling (and I thought of that as I was editing). But I’m really arguing for consistency and clarity in the interface. Yes, it’s a little thing that, at the most, bugs me, but also we see new users coming on here with this same question year after year.

My comment was not specifically directed at you (as I hope I made clear), but the “think of the new user” argument has been made often enough by those to justify a very narrow, personal feature request.

It’s a little akin to the implied “I paid a lot of money, so the developers ought to be mind-readers and already implemented my personal hobbyhorse feature as a one-click option.”

Most users are much more understanding, but I guess today I just decided to rant.