Why vibrato and tremolo doesn't have MIX parameter?

I am trying to push my workflow to stock only and Cubase is 90% full packed (maybe someone can point me out what is “hard\soft clipper” in Cubase Pro and how do you automate faders? Cuz I use 3rd party GClip and GFader (I don’t like its volume curve, it’s 100% linear))

BUT where is mix rotaries on vibrato and tremolo? Isn’t it essential thing there? Literally I have no idea how to use them without it. 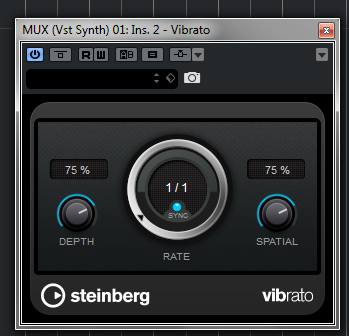 Have you tried using the Vibrato and Tremolo as send effects rather than as inserts?

on a tremelo I can’t see what mix gives you that depth doesn’t ?

Send FX is totally not the same. Why would you even use tremolo as send? You can’t easily switch between vibrato/tremolo and back, I don’t want wet + dry, I need wet OR dry

Alrighty, depth in vibrato actually is dry OR (wet * rate)

But using it more I understood that Cubase lacks of Macro thing, I actually want easily tune Rate AND Depth. It’s kinda impossible now with mouse. So I’d go with MUX, which is much more versatile, but it can not pick up Cubase native plugins like tremolo.

I did google and I found what I need. As far as I understand what daTube is - it’s a soft cliper
Distortion is hard clipper, but it’s very rough with reckless clipping at 0.1 amount
There is no way to automate fader in Cubase withoud third party fxVST
I have my own way of doing it
I was wondering if anybody had better tools\approach
And also I was mixing pretty long without knowing what basic clipper do, because there was no any in Cubase.
When I got GClip my mixes became much better, I can’t understand why cubase doesn’t offer such a needed and important thing.