Windows 10 suddenly don't use XLR microphone output from UR-12

As of today my Windows refuses to pass trough the Microphone signal from the Steinberg UR-12 to any application.
The output from Windows trough the UR-12 to my headphones just works fine. Just the input doesn’t all of the sudden. 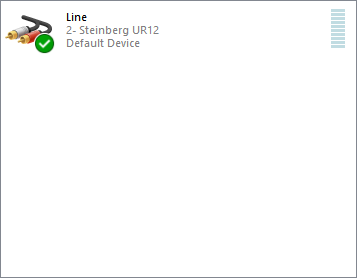 What could be wrong here? I removed the drivers atleast 4 times and also restarted the machine about 5 times.
Not sure why this comes up now… Also tested on different USB ports, no luck.

Microphone works fine as the direct monitor function on the Steinberg confirms that.

I had the weirdest thing.

I don’t know when the XLR input on my UR12 stopped working but I’ll share how I fixed it.

As well as Windows 10, I also have Ubuntu OS on this PC. When I booted into Ubuntu, the mic signal came through perfectly automatically. The only setting I changed was to select the Steinberg Analogue input to the default mic, as although the sound was coming through and recorded into Audacity, it didn’t record into Whatsapp.

When I booted back into Windows 10, the sound was coming through again.

I don’t understand it either, but may be worth a go as this seems to be a common issue.

Ubuntu is free and there are instruction on how to install alongside Windows online - I did it ages ago so I wouldn’t trust my memory to tell anyone. Not affiliated with Ubuntu either, only installed it as a previous Windows 10 version was causing my PC to crash 5-10 times a day.