Woke up with ringing in the ears. Decided to record and captured it in reality

If I record my room air now it wont be there. I actually was able to achieve some level of phase cancellation by playing back the recorded frequencies. Am I losing it? I know I’m losing it but wth? 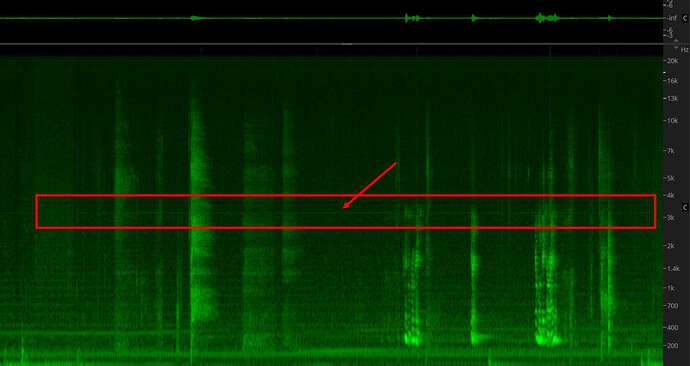 3200 fundamnental. This isnt generally in my environmernt as I commonly go over my audio for surveilance purpose.

What could it be?

The power unit of some electronic devices can emit high frequencies like that - it sounds like tinnitus but it’s not - for instance that’s the case with my video projector, I ended up walking all around my place with SpectraLayers recording live and monitoring the spectrogram as I was moving, to find the culprit

In my case, it makes this high frequency noise when it’s off but plugged to the power outlet (turning it on suppress the noise) - so I bought a special switch to cut it off completely from the grid when not in use.

So it’s possible you have an electronic device that emit such noise. Time to put SpectraLayers on a laptop and walk around

I’d agree except for the sound being in my head vs outside my head. I’ve suffered tinitus before and this surely met the criteria.

I do agree that devices can cause it. It’s a goverment conspiracy!

Both could be correct in this.
The high frequency signal is there since you are recording it and SL shows it.

Then your body-psychology is at work too. You could have not been hearing the signal because we have a unconscious ‘turn off’ ability that does its job with constant, useless noises. Tinitus is commonly related with this capacity. At some cases listeners are not even able to switch off normal daily sounds from their central perception, in other cases body internal sounds become part of the perceptual experience they cannot switch off.
Then is the classical high pitched noise “inside your head” triggered after some auditory excess… together with stress, lack of sleep and unhealthy nutrition. This could be had alone or together with the above cases.

Fun fact : in my case, tinnitus is purely psychological. And reading this thread make it buzz loud and clear in my head

@Kirmeth_Dugger Tinnitus is not audible to microphones. If it were there would be thousands of tiktoks and instagrams with everyone’s unique tinnitus style., also there would be big controversy around using Cochlear Unique Neurologic Tinnitus Sensors (what they shall surely call it) to identify criminals.

What was so cool is I played the recorded audio that I had boosted and it phase canceled my tinitus!

Well, not really, though it would be nice if true. But therapies with sound are used, but not for nulling, since tinnitus is not a sound to anyone but the tinnitusee.

Here’s a study on it, mayeb you can get even better at reducing it.

Despite high prevalence of tinnitus and its impact on quality life, there is no cure for tinnitus at present. Here, we report an effective means to temporarily suppress tinnitus by amplitude- and frequency-modulated tones. We systematically explored...

Thats interesting and I’m certain accurate for what they expierenced!

for sure, I have experimented with tones with some success. The problem is, thinking about tinnitus brings it on, so one treatment is to not think about it. No sh*t, I am not joking.

I know exactly what you mean. And I didnt remove my tinitus completly by doing what I did but it somehow freaked me out well enough that I got on to other things.

Whats so odd is how infrequent mine is. So, having the equipment I found what I thought could be the actual cause. Random signal of whatever source.

To further my suspicion I boosted that odd signal AND IT MATCHED THE SOUND IN MY HEAD!!!

I’m already a paranoid person. That sent me for a spin.