I am editing a series of piano pieces and am trying to be consistent in the use of performance directions. The manuscripts switch from full to abbreviated forms and I am wondering what would be the best course of action. Should one write everything in full, or use abbreviations only for the most common Italian words (accel., cresc., dim., rall., riten.) and write others in full (like arpeggiato, espressivo, marcato, simile, stringendo, tenuto), even though most musicians are likely to be able to resolve their abbreviated forms automatically? Is there an agreement among publishers as to which words should be abbreviated? I am uncomfortable having “string.” followed by “calando” a few bars later. What happens when common words are used together with other, less common, ones (like poco cresc. and legg. e veloce)? Should one write everything in full, or is mixing both forms correct? Thanks in advance for any input.

Just my two cents. No references to support it…

From a player’s perspective, abbreviations like accel, cresc, dim, rall, rit, are as commonplace as p and f, so there is no reason not to abbreviate - unless you want to write ac – ce – le – ran – do or cres – cen --do over a passage, etc.

But I have seen editions using cres as an abbreviation instead of cresc, and to me it looks odd even though it’s obvious what it means. I guess that means I don’t actually read the commonest abbreviations as “text,” but simply as “symbols” (which happen to be groups of letters) with a fixed meaning. Having to read “cres” as text and then parse it into Italian and translate it is more mental effort than seeing “cresc” or a hairpin.

Ten and sim are probably in the same “very common” category as accel etc. For anything else I would be inclined not to abbreviate unless you are short of space.

“poco cresc” seems fine to me. You can’t abbreviate poco, and cresc is conventional. but “legg. e veloce” seems harder to read than leggiero e veloce." Not to mention the similarity of legg = leggiero and leg = legato, both of which make sense combined with veloce. Somebody out there will assume legg was a misprint for leg one day - and given the existence of computer playback, the argument that “this piece is never going to be played by a beginner who has never seen the term leggiero before” doesn’t apply any more in the 21st century.

Just be thankful if your composer didn’t write sf, sfz, fz, rf, rfz and it’s not very clear whether they mean different things, or are just carelessly chosen abbreviations for the same thing! Schubert was sometimes guilty of that one … and scholarly arguments about what they ought to mean, on the authority of some reference book, are dangerous if the composer had never read the book!

I’d write everything out in full. You don’t usually see other technical text utilizing abbreviations. The fact that abbreviations are used as part of the actual musical notation is another thing altogether.

The Dorico Operation Manual writes terms out in full except when indicating the available abbreviations to be used in actual notation.

I guess we interpreted “performance directions” differently in the OP. I assumed Marc-André was talking about the score itself, not some editorial text.

Keep in mind this is only one publisher, but the Schirmer “Manual of Style and Usage” has a good section on abbreviations including showing which terms should be roman vs italic, and which should never be abbreviated. The terms with an * should only be used if “space is at a premium and the context is already established.” I definitely don’t follow their guidelines here for everything, but it’s a pretty good general guide, and at least shows how one major respected publisher handles abbreviations. 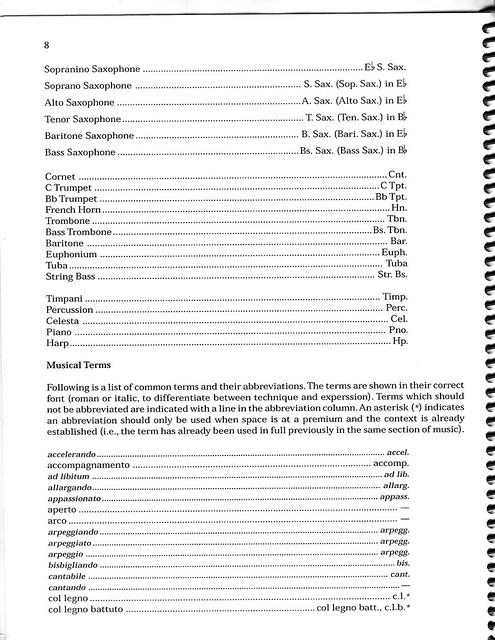 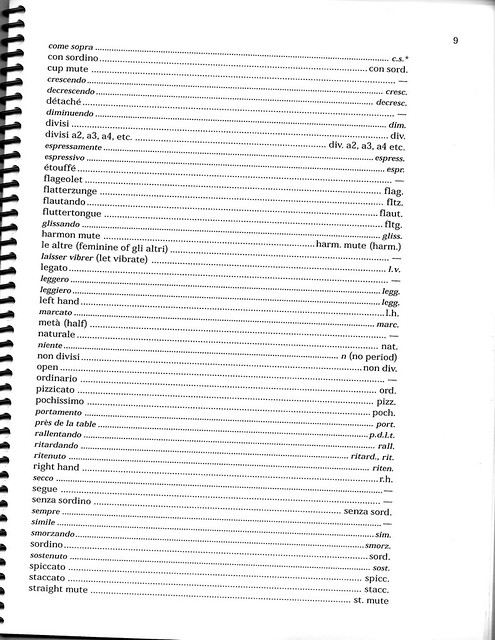 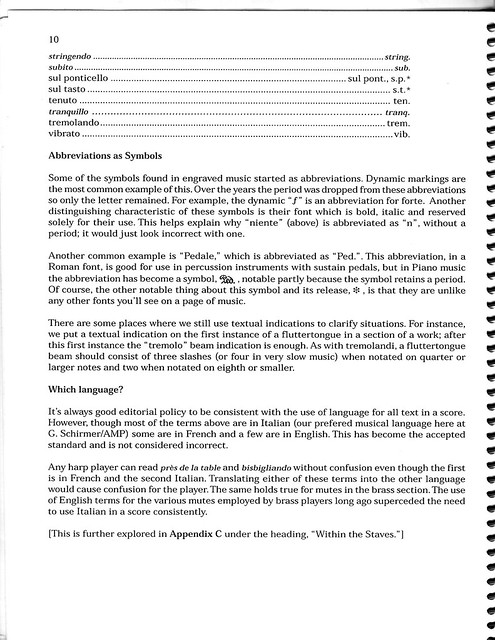 Many thanks for the detailed answers so far.

Rob: Indeed, I am referring to the strings of text entered into the music itself, not what I may use in a critical report. And I do have instances of “rf” and do not know if this meant the same thing for the composer as “rfz”!