7 design issues that should be easy to fix in Cubase

Yes, it’s a great DAW functionality-wise, I’ve been using it since 2004 or so, but UI/UX-wise it doesn’t always live up to the “Pro” in its name.
Now I know design is often subjective (like colours and skeuomorphic vs. flat design) but there are some guidelines in (screen) design nonetheless and as someone who has worked in that area (print design, granted), it still makes me cringe when I look at Cubase since 7.
The biggest problem with Cubase is missing consistency in my opinion. There are UI elements from the past 15 years mixed together, but even the newer ones fail in this regard.

1. Scrollbars.
I counted four different scrollbar designs. 1. mixer, bottom 2. mixer, rack (also in the plugin manager), 3. Arrange window (also really badly aligned!) and 4. Windows from the good old SX days.
Now which one would be easiest to grab with a mouse or a touchpad? Take a guess…

Now here’s what Jakob Nielsen has to say about designing scrollbars (read it, Steinberg!) 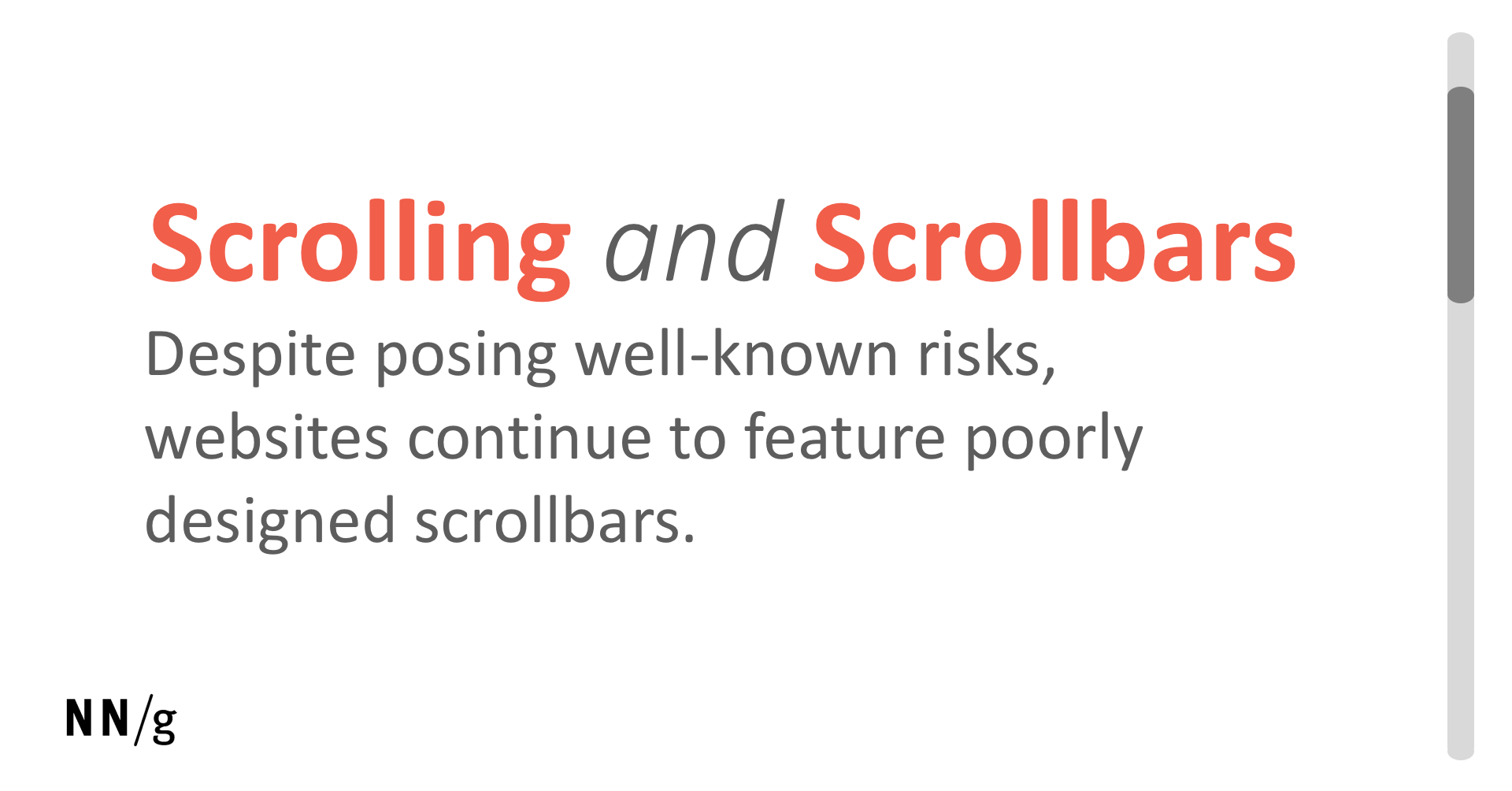 
TL;DR: best practice, use those the operating system provides. If you use your own, make it look like a toolbar that users know.

2. The Edit-"e"
Cubase users know the slightly slanted lower case “e” since long time as a symbol for “edit”. So why the hell is it an uppercase “E” above the faders in the mixer??? It isn’t even in the insert rack in the same window. It isn’t in the arrangement. Nowhere.
I really don’t get it, this is such a screaming inconsistency, it looks like an amateur’s work.

3. The faders
Also since C7, it has gotten hard to tell the channels apart because of missing optical separation. Each fader is actually nearer to it’s neighbour’s meter than its own.

4. get rid of the ellipsis (…) in the insert/send name slots
Please tell me, which one of Valhalla’s plugins are listed here:

Now let’s look at how C6 handled this:

The ellipsis doesn’t add information, it removes it. Get rid of it.

5. the new green pre/post-fader line
OK, this might be a taste issue, but whoever thought it would be cool to use a light green dotted line that appears nowhere else in the entire Cubase UI system has a bad taste. The visual feedback for pre/post fader is guaranteed by the different slot colors (blue/green), no need to give us eye cancer. Or make it at least the same color as the “focus color” which is user customizable.

6. Do not change design elements just for the sake of it between versions
From C9 to C9.5 several things have changed that IMHO actually didn’t need fixing badly.
The plugin select window looks different now, the visibility is now indicated by a checkmark instead of a circle (frankly, looks like a bad Powerpoint now), the zones indicators are still circles, the insert bypass buttons now look different than the send bypasses. All not dramatic changes, but not entirely neccessary. It seems like they were done just to show that you made an update. I might be wrong and there is a reasoning behind it that I don’t see.

7. Use a consistent UI toolkit
Now this might not be so easy to fix as I guess that the UI widget class design at Cubase is pretty much a convoluted mess of over 15 years.
These are some of Cubases windows. Not one looks the same, even the newer ones on the left have all different icons, different backgrounds and buttons with varying shades of grey. It looks as if they are from at least two different programs:

I mean, if you write a new plugin manager, why make it look completely different from the rest of the program, color-wise?

I only updated from C6 to C9 a year ago and I still haven’t really gotten used to the new UI, especially the mixer.
OK, rant over

Many of us had this “fight” when C7 came about… I agree completely. It’s about time to unify the looks of all windows and menus etc.

Indeed Steinberg have to work around and do something to fix these GUI issues. Especially the Scrollbars and the faders. The other things could be somehow acceptable, but they also need some work around…
I hope they will take in mind this topic!
Actually Cubase is the only software on my computer with few different scrolbars

Pro Tools, Studio One, Sibelius, Notion, Overture 5.5, Kontakt… OpenOffice, Firefox… all they have identically looking scrollbars, that are easy to be grabbed by mouse.
BTW, Pro Tools could be given as great example /the best one in my opinion and experience/ for well designed GUI, and also the colors are really well selected.
I’m agree that Steiny have to read the article written by Jacob Nielsen, it’s really good!

All very good observations and very well put. Great work! They need to adresse this!

I agree with your critiques and actually made a similar post about this somewhere else.

Just remember that most of these things have technical reasons behind them, including that white plug-in manager, and that work on the UI is an ongoing process.

Just remember that most of these things have technical reasons behind them, including that white plug-in manager, and that work on the UI is an ongoing process.

Sorry, i really cannot see a technical reason for one white window amidst a otherwise dark GUI. Or the other issues like different scrollbar designs. I know that there is still a lot of SX-Code left, especially in the dialogs, but I have no problem with that, those are actually fine.

It is mostly the stuff since C7 when they redesigned a lot that is inconsistent, so it cannot be because of an old codebase. Yes, Cubase was never the prettiest or most elegant DAW on the market, but things have gotten worse in the past years.

I agree on all points except for number 5. There needs to be some demarcation where we know if we are inserting a pre- or post-fader insert now that it is adjustable in 9.5. Simply showing feedback after the insert has been added is not enough. The focus color solution might be a way to go, but I could also see it getting lost in the UI that way. Maybe we could just make the color customizable?

P.S. Green is the the color the human eye sees with the highest definition.
https://www.quora.com/Why-does-the-human-eye-see-more-shades-of-green-than-any-other-colour

So true. Especially about MixConsole. Since the time it was distributed I just avoid to use it because I hardly can see that very channel I want to use. We need better channel separators. And all those knobs 'M" “S” “L” “E” etc. glued together are terrible to my taste.

Fully agree. Everything!
Cubase GUI is very inconsistent.
Which is not only the issue of taste.
It is hard on eyes and makes the work flow less intuitive.
+1000000…

These are all great points. The pre/post plugin line doesn’t bother me at all, but everything else combines to make the Cubase GUI look somewhat pasted together compared to other DAWs.

So true. Especially about MixConsole. Since the time it was distributed I just avoid to use it because I hardly can see that very channel I want to use. We need better channel separators. And all those knobs 'M" “S” “L” “E” etc. glued together are terrible to my taste.

I’d vote for this; anything to give the eye a better visual clue.

Scrolling up and down in the MixConsole rack when say the EQ section is open, and fills the entire space.? Painful. Error prone.
Scrolling horizontally, when you accidentally have your mouse cursor over a fader…? whoops.! there goes your level on that channel…

Whilst the Pre/Post fader line isn’t really much of an issue, I did think WTF, why, when i first seen it, it’s so out of place. The plug in manger assaulted me the first time i opened it. The elipssis is totally useless. The E annoys me, even just the placement of these letter in the button is off from what would be considered good alignment. Also the STEREO/MONO in control room on smallest view, cuts the letters, the 1/2 box doesn’t even need to be next to it, this could be combined.

And point 6, circles and ticks… that was my biggest WHY? at least if doing that make it more compact.

Whilst the Pre/Post fader line isn’t really much of an issue, I did think WTF, why, when i first seen it, it’s so out of place.

Because you can move the pre/post fader line now that they upped to 16 inserts. You need to be able to find it/click it/drag it. It used to just be an indicator but now it’s a control.