Is it possible to always prevent amalgamation on condensing?

I’ve 2 players, soprano and alto, that I’m condensing on one stave. Alti are used to reading notes with down-stem (and up-stem for soprano). Actually I’m getting something not very consistent for reading, regularly all notes are amalgamated with an up-stem (which is still readable, but a bit confusing for singers).

Yes, there’s an option for this on the Condensing page of Notation Options.

But it doesn’t prevent amalgamation in all situations (only if necessary, to still be able to identify which note is for the right instruments).
On a same stave, I would have something looking similar to voice 1 (stem always up for Soprano) and voice 2 (stem always down for Alto).

Do I missed another option somewhere? Or I misunderstood this option?

You can always cheat a bit, changing properties that have no visual effect in notes, slurs, dynamics, etc. Or you can add an invisible dynamic or playing technique in just one of the voices.

Yes, if it’s only occasionally. But as I have a lot of scores to rewrite, I don’t want to do kind of patch-up every time this problem come again.

Then your best option is to wait for the condensation change option, which was mentioned by the team in several threads. For the time being, I cannot think of another solution. Bear in mind that condensation is just in its early stages, it’s expected that many situations aren’t covered yet (it happened to me already).

I have a project where I seem to be unable to prevent amalgamation of slurs.

In Notation options > Amalgamation approach for slurs > Prevent amalgamation for all slurs. Still, for instance from bar 16 to 17 and 17 to 18, slurs in second A clarinet are not shown. They are, however, shown from bar 18 to 19. I tried to delete and re-input the slurs, I tried to delete slurs in both A clarinet parts and re-input with both part selected at once to link the slurs. Still amalgamated. Goes for most slurs throughout the score, now that I browse it quickly.

When I toggle Amalgamation for slurs in this panel, it seems the default setting is Allow, even though I chose the opposite setting in Notation options, as mentioned above. And even when selecting Prevent for all slurs in the Condensing change panel, the slur in second A clarinet still doesn’t show. Suggestions?
Lakmé.dorico.zip (961 KB)

This is working as designed. If you want two slurs in 16-17 and 17-18 you need two voices, presumably with Clarinet 1 upstem and Clarinet 2 downstem.

For what cases are then the Prevent amalgamation of slurs settings? And why does it work from bar 18 to 19?

Look at the Slur Amalgamation options in Notation Options, then read the text underneath it carefully.

Your two phrases (where a phrase starts and finishes each time rests are encountered) do not apply, because the two instruments consistently have the same rhythm. There is no reason for Dorico to automatically split them into two voices, and if no part of the phrase is in two voices then two slurs will not (and should not) be shown.

Clarinet 2 doesn’t have any rests after the first quaver/eighth of bar 19, so this red box is one phrase. The fact that Clarinet 2 carries on with different music (and Clarinet 1 has rests) means that Dorico approaches this phrase differently to 16-17 and 17-18, and splits the instruments into two voices.

What confuses me, I guess, is the word “voices” at all mentioned in connection with condensing. Aren’t voices already condensed, since they are on the same system – eliminating the need to condensate? These questions probably arises from inexperience with the relevant scenarios so I’m anxious to learn.

No. The first two bars here have two sets of stems - instrument 1 is upstem and instrument 2 is downstem.
The third and fourth bars here have one set of stems. (Going for clarity here rather than aiming to patronise) Convention is that where only one voice is present, stem directions follow the usual rules. The expectation is that we figure out that player 1 takes the top notes and player 2 takes the bottom notes, unless told otherwise.

You wouldn’t dream of writing two slurs on each of the third and fourth bars above, because it’s obvious that the single slurs apply to both notes in the “chord”.

Exactly the same rules apply to the green boxed phrases I highlighted earlier, because effectively we’re dealing with chords in one voice. One voice = one slur:

If you really want to split the two players onto separate voices with separate slurs, that’s possible: 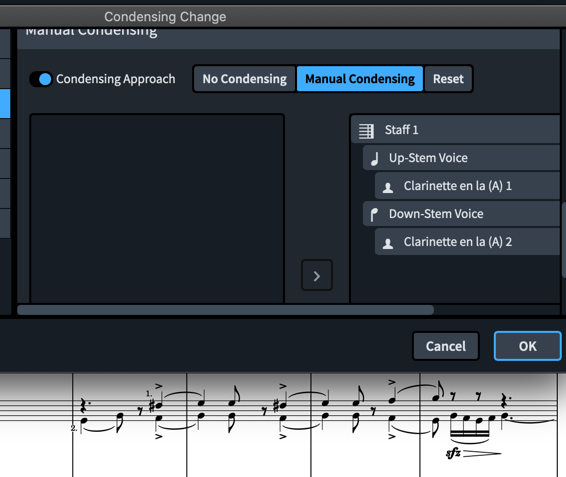 Thanks, this is interesting, and thanks for the tip.

Occasionally I get uneasy by the strict orders that Dorico sometimes puts on its user to follow inherited conventions – as chosen by Dorico. What if the second clarinet in fact had no slur, and that this is an intended detail for whatever reason? Conventionally, nobody is supposed to think of putting slurs in both notes in the chord. So when convention says the slur, in condensed form, gives itself to both parts, and one reads music differently and would like to make it all even more detailed – well, I guess one have to take the leap and rather take the ridicule. I often need to make such details crystal clear to the reader. And when I would like to condensate to avoid cramming the page, I need the settings you just showed me – thanks again for that, I will put it to use. So I would in fact think of putting a slur on both parts. As a reader I usually have the insight to detect the intention. But quite often I (and among thousands of users, who knows, others too?) would like both condensing and avoidance of amalgamation of slurs – against convention.

These are simply musings. Because conventions interest me anyway and one needs to know them. When I learn of them (and I have a LOT of them to learn) I have to test them against my own instincts and preferences. I am however often intimidated by how aloof and impeachable conventions present themselves, and how they often the loudly refuse deviations with a myriad of remarkably sharp phrases.

If the second clarinet in fact has no slur, then Dorico will automatically split the clarinets onto separate voices/stems, and slur only the top one, like so:

Conventions change over time. Dorico tries to be up to date, and its default behaviour here complies with Gould etc. As of Dorico 3.1 you have the capability to add Condensing Changes to do whatever you need, hopefully…

Dorico will only condense notation that is unambiguous.

If one instrument has a slur and the other does not, either they will have separate condensed voices, or they will not be condensed at all.

When you say " So I would in fact think of putting a slur on both parts," remember that the player only sees one part, not both of them!

Thanks guys, I learn from this. There are conventions, there is philosophy and different approaches, interesting.

When you say " So I would in fact think of putting a slur on both parts," remember that the player only sees one part, not both of them!

Indeed – but the conductor sees both – condensed.

Thanks to both of you for your advice and insight – because of it, my score is beginning to both look OK and make sense in my eyes and mind.

FWIW two condensed instruments sharing stems and with only one slur looks a bit strange to me.

But if it uses less vertical space than forcing separate stems everywhere, I guess I’ll get used to it eventually!

What, in the third and fourth bars here?