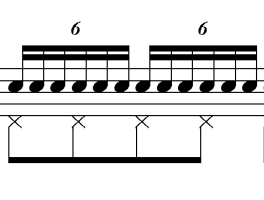 And then change the snare to be in the top voice, allowing separate eighth notes on the pedal high hat as in the example.

So, I start with:

And obviously, the quarter note high hat pedal is part of the triplet voice, so it doesn’t work.

Note that this works fine without tuplets:

I’m guessing this is a bug that can be fixed in a future version. However, I can’t for the life of me figure out how to work around the issue (even with ugly notation) as I can’t get the top voice to allow triplets and the bottom to not.

…I guess a (hard-to-play with two arms) workaround would be to have a sticked closed high hap in the top voice and the snare in the bottom voice.

Have you tried changing the voice allocations of instruments in the kit in its Edit Percussion Kit dialog?

The Edit Percussion Kit dialog allows you to make changes to percussion kits, including which instruments are included in them and how instruments are arranged in the different available kit presentations.

Thanks for the response.

Two possibilities in that dialogue seem possible, both help, neither are perfect:

The first would avoid the specific problem in this thread, but would similarly struggle if ever the snares had a different tuplet than the cymbols.

The second helps - now the snares are more easily made independent, but isn’t ideal because simpler drum beats now are much more complicated to notate (see how the snare and the kicks are now separate voices):

So, probably the workaround I listed in a previous post, or option 2 here, are decent workarounds, but it does seem like there’s a bug that can be fixed to make this work flawlessly.

It can be done by creating a second snare with stems up. Take a look at the stem directions in the Drum Kit definition in the attached file.
snareStems.dorico (477.1 KB) 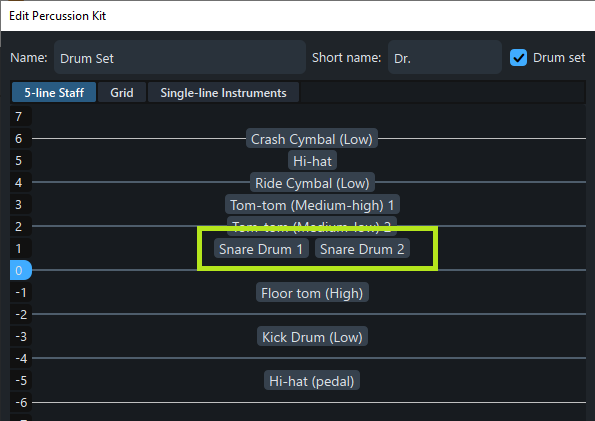 This issue has been discussed before, e.g. in this thread:

See attached project. The selected note is supposed to be an eighth note. No matter in which voice I put it, it’s being displayed wrongly. I am about to fill in my percussion soloists, and these kind of issue appeared over and over. In other situations I could renotate, but the issue is very annoying! Like this, percussion kits (in 5-line staff) are not really usable for me… Quite unfortunate, when notating a percussion concerto… weird drums.dorico (723.6 KB) [Bildschirmfoto 2022-08-23 um 2…