As one of the first products developed together by Yamaha and Steinberg, the CC121 Advanced Integration Controller was initially introduced in 2008 — we are proud that it still is one of the best controllers for Cubase to date, being an essential part in the setups of both professionals and hobbyists.

Unfortunately, after being over a decade in the market, components required to build the CC121 are no longer available which leads to the situation that production has ceased. While the CC121 will no longer be delivered to dealers and distributors from now on, it might be possible to obtain one of the last ones through retailers.

I would like to take this opportunity to thank all the CC121 users and reassure that we will continue to develop new drivers and TOOLS for the CC121 to support our loyal user base when upgrading to future operating systems and versions of Cubase.

I would like to add that we have been assessing the future of Steinberg controllers, and we are working on ideas and concepts for a new controller solution to enhance your Cubase workflow.

Thanks Stefan, this was somewhat expected. As I understand, the work on the new controller solution is still in the concept phase. I am a controller freak and have been studying the market VERY closely and deeply for the last 2-3 years, because I believe the current offering (by both big players and niche players) is still quite far from where it should be and I’m always hoping that something hits the market which fills most of these gaps. I’d be extremely happy to provide (for free, of course, as it is first and foremost in my interest) input from my research to support the design of the new solution: is there a way for me to do so?
In the meantime, I cannot link it here but there is a long Gearspace thread aptly named “Sad state of DAW controllers in 2020” that I have contributed to quite extensively, which contains a great deal of input from many pro and prosumer DAW users, albeit quite unstructured and sometimes contradicting, as you could expect from a long forum thread
Hope this helps and hope I can help more directly!
Michele

It’s good to see this finally confirmed here on the forum!

It’s also heartening to learn that drivers and tools are not necessarily frozen in time now that production has ceased.

With that in mind–if only the AI knob could do horizontal zoom… that would really round out the basic features… with that functionality I don’t think I’d even miss my MC Control anymore. Might that be possible down the road?

Please include a scroll wheel in this style please.

Hello dear Steinberg.
I’m think it’s can be good if you doing something like (Icon qcon pro x and pro xs) or (Behringer x-touch with xtender) with 8-16 faders,screen and audio meters.
So we can control Cubase,Nuendo,Wavelab,plug-ins,instruments and audio cards software and hardware with total ai integration.
It’s can be good have some floor controller for the guitarists to. For work with vst amp rack live and in the studio recording.
Thanks.

I almost thought so, components are a big problem with older developments. But before all energy is put into the new hardware development, the software of the IC Pro could also be revised faster - because there is also a lack of innovation here. Even if it’s not the same, of course.

Excited to see what the team comes up with!

Totally second that!!! I mean the QCon/X-Touch thing. More the QCon because the X-Touch can’t be physically joined into a single sleek unit. But that’s the winning idea design-wise: a main 8-fader unit with transport with up to 3 8-fader extenders. In the main unit, there should be a channel strip controller a-la SSL UC1 to natively control at least the native Cubase channel strip, possibly with mapping also other channel strip plugins. All with native Cubase integration, meaning track selection in Cubase follows on the controller and banking on the controller scrolls in Cubase. And keeping the fantastic features of CC121 of course. I’d be happy to buy something like that from Steinberg instead of filling SSL/iCon/Avid’s pockets (especially Avid…) for a Frankenstein solution, poorly integrated and still pretty expensive.

Dear Steinberg, feel free to resurrect the Android controller app you used to sell and we bought and used and then you quickly dumped.

Yes I’m thinking we need something good and big with a good price to.
Because Yamaha Nuage was very good to,
but price was very high.

Thank you for keeping us informed.
I just ordered a used CC121 literally a day before this was posted, I’m excited to use it, and I’m glad that it will receive continued software updates.
About the future controller, if it’s possible, I’d like to see the ability to write and read MIDI automation data for expression and dynamics tracks using the motorized fader (or for any automation track for that matter). If this is something that can be done, in my opinion, it would be revolutionary. Other controllers on the market can do this, but not with motorized faders. The Presonus FaderPort, for example, I recently spent an entire day troubleshooting to try to figure out how to do it, and ultimately gave up. If the new Steinberg controller’s motorized fader could easily do this in a similar way to the CC121’s AI knob, for example, or if the fader could be configured like this within the Generic Remote settings, that could be really powerful and useful.

I’d like to see the protocols for deep integration like Cubase ic Pro and the CC121 (even EUCON) can achieve opened up so third parties can write software and make hardware in an open source/hardware community. At the moment even trivial things like mackie auto banking has to be hacked in. Most of this is just MIDI and remote controllers, why not open up what remains and let us all build custom controllers with deep integration?

A common issue with daw controllers seems to be that the labels for the buttons often don’t match the mapping for a particular DAW. This may be less of an issue in a controller which targets only one specific DAW, but even then there are likely to be some reprogrammable\user definable buttons.

Whilst custom cut overlays or even sticky labels “work” - we now have technology such as that used in the Elgato streamdeck (colour) or Nemeio keyboard (monochrome e-ink) which offer a good balance between configurability whilst still being tactile (i.e. a physical button rather than a touchscreen). It would be good to see this sort of feature incorporated in a future DAW controller.

Here is my vision of a new controller:

OK, let me fantasize a bit in case a Steinberg/Yamaha product manager is on this board: the new CC121 will be a merger of the CC121 and the Arturia Keylab Essentual 61. It will be called Yamaha CC61. Instead of 8 faders it will only have one on the left, but it will be automated like in the CC121. Of course there will be the AI knob, a pan knob and at least 8 knobs to control the plugins with MIDI Learn. The master keyboard will have a bright white color. There will be 8 or 16 pads for drumming/…

To clarify, the colored LED rings around the knobs should be able to display values from 0-100% by the length of the ring like in the Serum synth. Maybe even two rings with different colors if possible. And everything in realtime. You can do it!

…and then Cubase 12 we released with advanced MIDI controller support…upgrade time!

What about this MP midi?
Please Steinberg, make something like this, but without wrapper, so we can control all our instruments and plugin easily.
Add some slider + expressionmap integration…
This is exactly what we need. 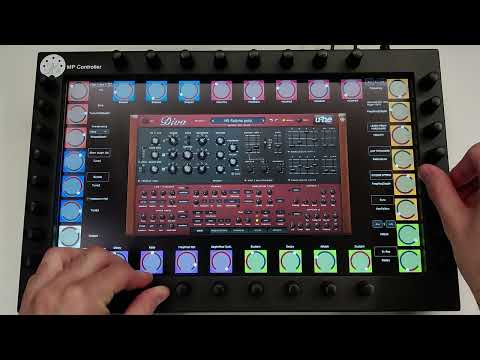 MP Midi Controller is a system that consists of hardware and software and enables controlling VST3 and AU plugins as hardware. It works in all major DAWs as a VST3 AU and AAX plugin.

Wait. This might be “sort of” what we need for plugin control, but way before that, I think we need a multi-fader, modular CC121, something like the QCon, MCU, X-Touch etc. but with the level of Cubase integration of the CC121. Then, once we have that, this MP Midi stuff would become nice-to-have as you would be able to do most everything in the other one

This was expected, and I will now treasure my CC121 even more

(1) Whatever its eventual replacement will be, please make sure it has the same awesome build quality. No flimsy, plasticy stuff please.
(2) I have a Yamaha TF1 digital mixer which would make a great Cubase controller with motorized faders. Since both are owned by Yamaha, this would be a software-only solution that would unlock a whole new market for the TF1!