I love Dorico. Even though it is still a work in progress, it is like a dream come true for me just the way it is. I also work in a DAW that has the ability to automatically identify the chord names in a midi file and then alter the midi notes if the chord name is later changed. This allows me to experiment in beneficial ways especially when dealing with thick and thicker jazz harmonies sometimes arriving at choices I wouldn’t have thought of otherwise. In fact several DAW’s now have chord recognition abilities of some sort. I wonder if this could be very useful in a notation program as well. Is this something being considered at all? Are there other users who would like to see it happen?

Dorico already has chord recognition, in that if you type Shift-Q to type in a chord symbol, you can then play the chord on a midi keyboard and Dorico will interpret it as text.
Also, select any group of notes on the screen and look down at the bottom of the window: 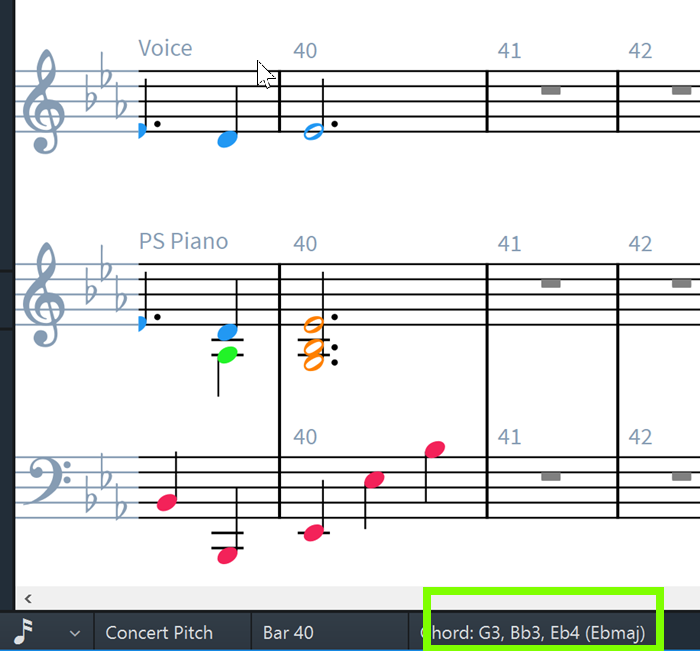 Dorico won’t automatically change the notes according to a changed chord symbol - I guess people will speak up if it’s something they’re interested in.

Thanks. I never noticed the chord identification shown at the bottom of the screen, but that’s probably because I work mostly with sax quartet arrangements where each part is on a separate staff and the feature you point out is not functional across staves. I was thinking in terms of an automatic analysis of the harmonic structure including all parts of a score (except percussion of course).

I’m thinking it might be a relatively easy addition to the software to make the existing chord recognition ability able to recognize chords across multiple staves. I think that would be very helpful. Another related improvement would be the ability to sound all notes of a chord when clicking on one, even when they are on separate staves. I could achieve what I want by writing all four parts of a quartet on one staff so I can see chord recognition and hear the chords with one click, etc. then later divide them to four separate staves, but it would be great not to have to go through those extra steps.

Sibelius recognizes chords across staves. I’m not saying it’s easy, or that Dorico should do it because Sibelius does… only pointing out that there’s a whole user base that finds this feature useful.

You’re right, I was just referencing the old adage in jest.

It well may be easy. And it’s certainly a feature that makes sense.

Please notice I said “relatively” easy. As in, easier than some other features that might have been requested or even planned. I’ve tried some coding myself, in Basic, C, C++, and even in Assembly Language. It’s never “easy”. But a feature like I’m suggesting might not be the most difficult addition either.

I would find a chord recognition facility - similar to the Sibelius find chord symbols plugin - very useful. This is the only thing that is stopping me from abandoning Sibelius completely. Strangely enough, I imported some music into Dorico, and it has come up with some chord symbols which were not in the original file…not sure what is going on here…

I would find a chord recognition facility - similar to the Sibelius find chord symbols plugin - very useful. This is the only thing that is stopping me from abandoning Sibelius completely. Strangely enough, I imported some music into Dorico, and it has come up with some chord symbols which were not in the original file…not sure what is going on here…

Dorico doesn’t just magic up chord symbols. Chances are that the chord symbols were hidden in Sibelius and you had View > Hidden Objects (or whatever Sibelius now calls that) turned off.

select any group of notes on the screen and look down at the bottom of the window:

That’s good to know, but it would be nice to select a range of music and have Dorico detect the chords and actually enter them into the score as chords. For many people, it would be easier to have the software take a first guess. It is easy to delete extraneous chords. And not too difficult to edit chords that weren’t exactly what we wanted.

As far as changing the notes wen the chord changes, everyone should note that Cubase has extensive capabilities in this area. The needs of the typical notation user may be different from the typical DAW user. Often this chord-based note shifting in Cubase is used for arpeggiated synth lines. That happens a lot in techno music, but it isn’t such a common thing in notated music. Nonetheless, Dorico should be advancing in this area.

I have also advocated for chord-awareness as we are nudging notes up and down in Dorico. Dorico actually does seem to have some smarts in this regard, but I believe there is an opportunity to be even more useful it it could fully consider the named chords that are in effect at any particular moment in the composition. And an option for color coding notes according to their compliance with the chords (green = notes explicitly defined in the chord, amber = notes in the scale implied by the chord, red = outside notes.) For example if the chord is C7(b9), the coding would be as shown in the attachment

I second this request for chord recognition and input as chord symbol or guitar tab with a click.

I second this request for chord recognition and input as chord symbol or guitar tab with a click.

Oh, well yes, but perhaps there are still somme other goals for the Dorico Team. But let’s dream …

Pretty much made my morning -

We used to have a cartoon on the office wall of a programmer sitting backwards on a chair, tied down with ropes, with a gag and handcuffs.

The caption was “but it was only a small mod…”

Logic and Pianoteq both show chords - although outside of the obvious ones they regularly disagree on what the chord is. I sense that’s where the"easy" part of this development goes out of the window. The Logic display is brilliant - top, centre and big. The Pianoteq display is more like a game of “Where’s Wally” - you know it’s up there somewhere …

Also, select any group of notes on the screen and look down at the bottom of the window:

This only works for “any” group of notes which were entered as a chord, right? Not with arpeggios (or, as pointed out, across instruments).

Yah, you have to work around it. Paste them temporarily as a chord somewhere.

It simply doesn’t work when notes are in multiple voices / staves:

Perhaps a simpler “version” of this request would be to have a toggleable “chord track” that sits below the chord symbols. The chord track would not be part of engraving but just there as a reference track to play with voicings. Both the chord symbol and chord track would stay sync’d using the existing recognition paradigm but you could edit either at any time. Even though it doesn’t span multiple voices or instruments it provides a valuable reference for voicings that can be copied to other parts.