I’m blown away by the condensing feature (and much else in Dorico 3) - hats off to the team!

However, I’ve run into a weird problem: I have a Big Band piece with (among others, four trumpets). The piece is in C minor (3 flats), D minor in transposed view (1 flat). 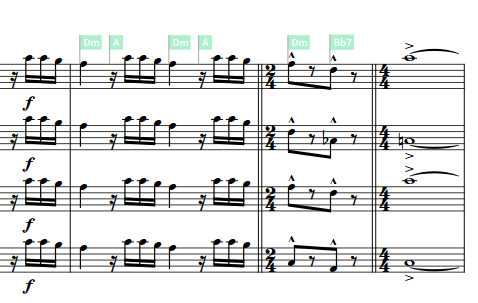 However, when I condense that score, several strange things happen: 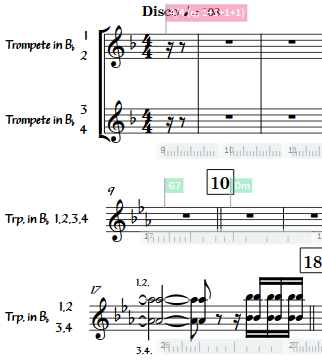 I’m attaching a reduced version (only the trumpet parts, renamed from Condensing.dorico to Condensing.zip) - can you take a look at what might be going wrong here?

When you have single unison notes, Dorico will happily allow them to be superimposed on each other, so you see a single notehead with stems pointing out on both sides. But when you have unison chords, Dorico won’t superimpose them, because then you would have stems running all the way along both sides of the extent of the chord. This is nothing to do with condensing – it just won’t do it under any circumstances. You can force the notes into the same voice column in Engrave mode, but I’d advise against it. You mmight really find that two condensing groups of Trumpets 1/2 and 3/4 would produce a more optimal result in this project.

As for the problem with the transposing instruments ending up with the wrong key signature, this sounds like another issue we’re currently looking at, and I’m reasonably sure it’ll be fixed in the first maintenance update when it comes.

It appears that the order of players matters to Dorico when condensing:

Result when players are sorted 1-3-2-4 (by dragging in setup mode):

So it’s not really “under any circumstances” that Dorico can’t find a visually pleasing result. I can’t judge if Dorico can be expected to try different permutations of players for determination of the optimal result - but I wouldn’t be surprised if it can’t (just imagine 8 horns and all the possible combinations).

I hadn’t seen this thread before I posted, but I too have encountered the issue with incorrect transposing key sigs in condensed scores.
https://www.steinberg.net/forums/viewtopic.php?f=246&t=167545

I’d need to see the original, uncondensed source music to provide you with any insight over the impact that the order of the players has on the condensing you’re getting with your trumpets. If you want to attach a minimal project containing just those four trumpets for those six bars, I’d be happy to look at it.

Daniel, its already attached to the first post (Condensing.zip)

Here’s an example where my file was exhibiting this.
CondensingKeySigBug.zip (1.45 MB)

Re: Tim’s original project in this thread, if Trumpets 1/3 and 2/4 are the better pairings, you should create custom condensing groups consisting of those two pairs of instruments in the Players page of Layout Options.

Ok, but how can we do if we need condensing 4 trumpets in one bloc and 2 X 2 in another one, I mean in Configuration preferences condensing create a group with four trumpets and I use Condensing change to create two groups (trumpet 1&2/3&4) but in this case chords won’t superimpose …

Ok thanks that’s perfectly clear but in this case when I use condensing change to create two groups (trumpets 1&2/3&4) is it possible to make chords surimpose ?

When you say “superimpose”, do you mean show them both on the same staff? If so, yes, you can, but you may need to specify that using manual condensing if Dorico doesn’t think the music should be shown on a single staff.

uncondensed problem788×644 20.1 KB
in this case when I want to condense all violins in one chord the result is

I tried to reproduce this issue in a new project and wasn’t able to. Would you be able to attach your project, or at least (say) just the violin players (you can delete everything else in Setup mode) so I can take a closer look?

Ok
here is the challenge
Condensing challenge.dorico (508.0 KB)
and thanks again for your help