I’m notating a transcription that I would like to read as long measures with dashed barlines rather than real barlines with meter changes every measure.

I understand all the arguments against this, but this is a special case (Arabic vocal music from the 1920s) where this will be more readable for the intended audience. It’s not intended for sight-reading or for non-specialists.

Is there a way to do this in Dorico other than a combination of forced durations, manual beaming, and added barlines? Ideally what I would like is the following at the beginning:
24/8 (5+5+4+7+3), with dashed barlines separating the groupings, and with Dorico recognizing durations and beaming correctly from the beginning.

Unfortunately Dorico will only automatically add dashed barlines in very specific circumstances, namely in an aggregate time signature, e.g. 3+4 | 2/4 or similar. It doesn’t provide a way to do this for subdivisions within a single bar. You could do it by setting up a single bar with the appropriate barlines added manually, then use the system track to select that bar and all its contents, and hit R to repeat it after itself, maybe?

This might work, I will try it. In this case I may just go with changing time signatures after all, as the second half is alternating bars of 24/8 and 23/8 and it has the potential to be confusing.

This is the sort of thing that was pretty easy to do in Finale (though the lack of microtonal and free-meter support made other things in this style much more cumbersome).

So this actually worked!

It was a little cumbersome, and for some reason the 7 grouping would not beam correctly by default no matter what (strangely it would do 2+3+2) but overall it worked okay. Thanks again, Daniel!

Great, I’m glad to hear it turned out to be workable.

Brian, I’m very curious about this. I’d love to see a sample when you’re done. Are you making the music mirror image after the fact, by chance?

I once played for a few services for a Maronite Church where the music had text in Arabic and was a mirror image of normal western music. It really messed with my brain, but I was utterly fascinated by it.

I’m not doing the lyrics, since this is mainly for musical analysis.

Mirrored sheet music is not really used except occasionally in some religious music. Since Copts use a modified Greek script, I’d expect Maronite and Syriac churches to be the main ones that would do that, but I’m really mostly focused on secular music. Secular music is typically written normally, and lyrics either printed separate from the music, or in syllabalized Arabic script (syllables are R-L but words are L-R), or Romanized Arabic.

In any case, here is the music. It was actually pretty easy in the end to do two versions due to Dorico’s context-agnostic way of organizing pitch information. It’s in a mode called ‘Ajam Ashiran, similar to a major scale. Here’s the recording I took it from (recording is pitched approximately a step lower): المطربه سحر..قصيدة لاتعذليه..نادرة جدا - YouTube 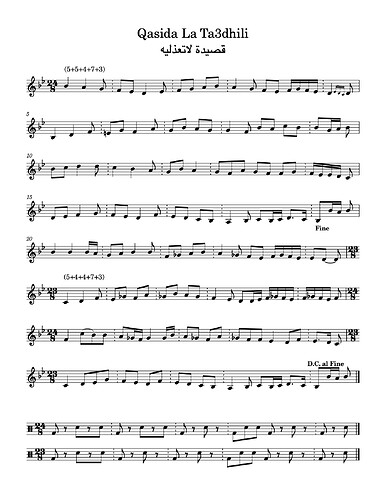 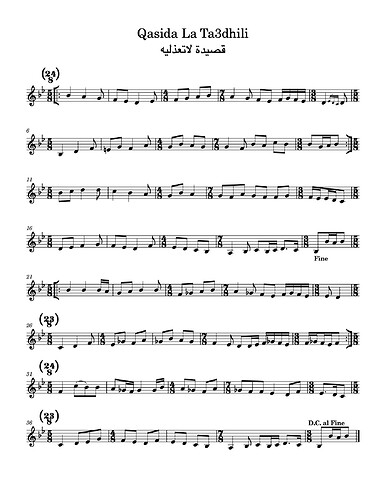 Actually, seeing this now I realize I left the repeats out of the second version by mistake. But should give you the idea.

Thanks for your response, Brian.

For anyone who was curious and has never seen the backwards music that I was speaking of, here are two examples: 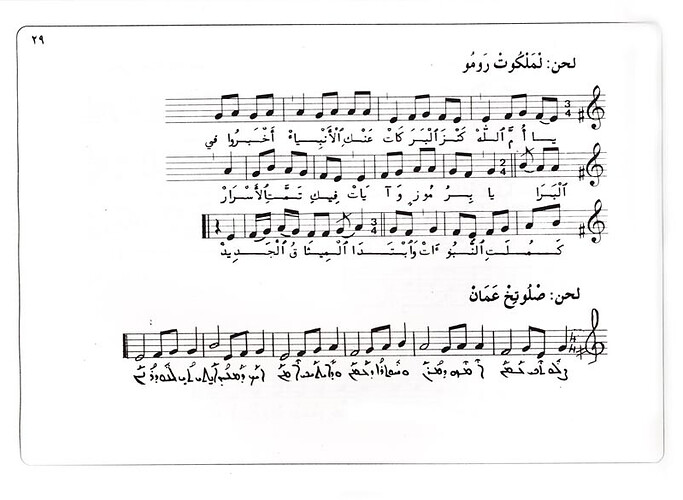 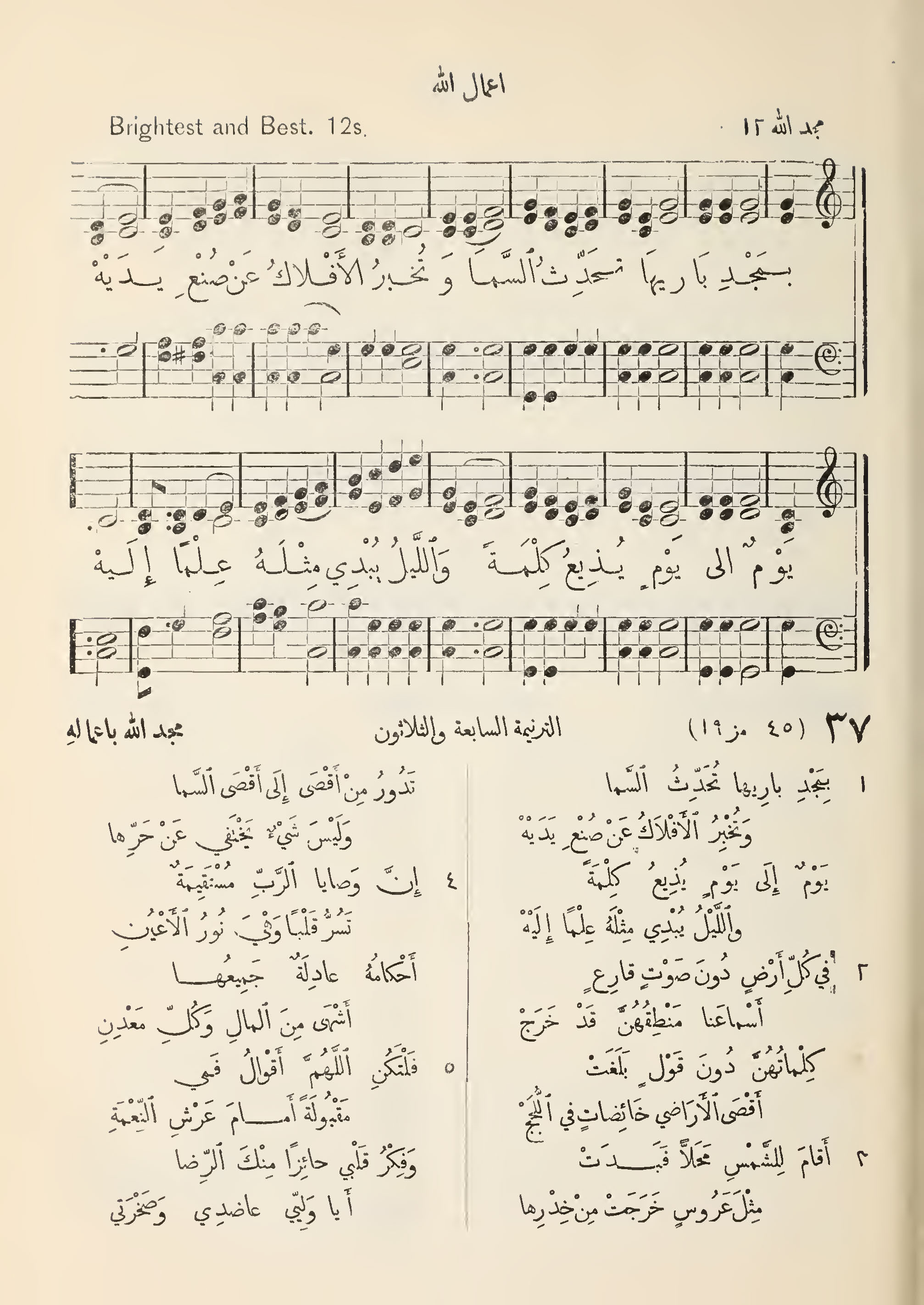 Some Hebrew sheet music was written this way in the past too, although it’s not common practice at all. See below for an example of Hava Nagila written that way.

Out of curiosity, is it possible to do something like this in Dorico? 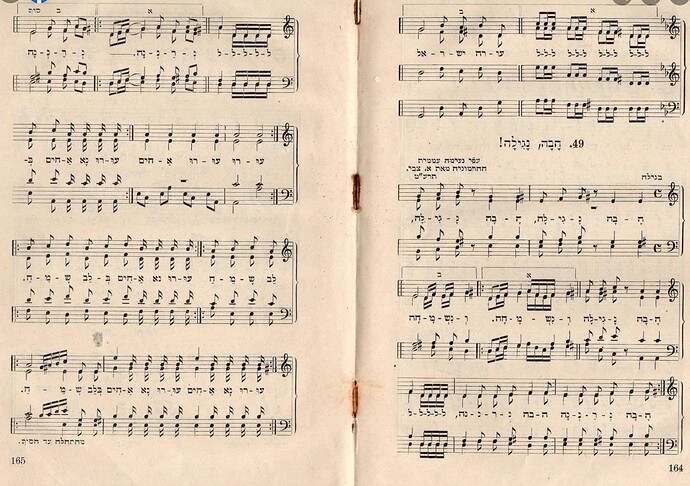 @Binkeys your example is interesting because it is only half backwards. The notes have flags on the proper sides and the clefs aren’t inverted, for instance. My example was truly a mirror image.

For now, there is no way of doing either version in dorico apart from generating a pdf without lyrics and then flipping it horizontally in another program.

@Romanos None of these are truly mirror-image though. All of them preserve the usual orientation of stems and flags, and the treble clefs are in the usual orientation. Mirrored music would look quite different, I don’t know how one could achieve the effect here. My guess is that they used some version of a sheet music typewriter.

Sadly, it was years ago that I subbed for the Maronite Church and I didn’t keep the music they gave me at the time (a decision I regret); that had truly mirrored music with backwards flags too. I don’t even know where to begin looking for such a thing now.

In a way, the fact that it is only half-backwards makes it even weirder to read. It would almost be easier as true mirror, but as it is in the examples above, you process it backwards but read the figures forward in reverse order. It really is a mind freak. 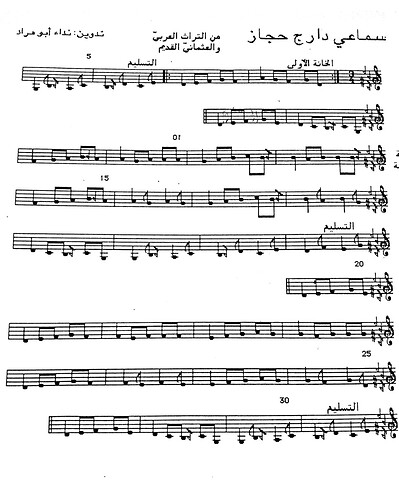 Ha, that’s wild. That really is mirror image. Though interestingly they aren’t using Arabic numbers for the time signatures — which is something I’ve seen before. Can’t imagine what program was used though.

This is a well-known piece, Sama‘i Darij Hijaz (or simply Darij Hijaz). The script at the top says “min al-turath al-Arabiya”, i.e., “from the Arabic tradition.” The next line says “wa al-Othmani al-qadim”, i.e., “and old Ottoman”. The script on the music is naming the sections, essentially “first section” “refrain” etc. The font is a little too blurry for me to read the rest of it (my Arabic is pretty rudimentary to say the least). The top left seems to say tadwin (notation) then a name, something Abu-Mrad.

Incidentally, John, I think we had a couple conversations on FB regarding Arabic music. The surprising thing about this piece is that it’s incredibly uncommon to see this used for secular music like this. The backwards notation is usually for religious services, hymns etc. Presumably this is a decent compromise since congregants may or may not really read music but can read Arabic and follow the written contours easily enough. For instrumental music like this, if people read music at all they are accustomed to reading left to right. The only common modern use I’ve seen was in Hebrew (but still only vocal music).

Yes— I’m so glad you posted this. This is the type of music I was handed (without much warning, I might add!)

Interesting stuff though. I played Moroccan (I’m Moroccan ;-)), Algerian, Tunisian, Egyptian and Middle-East music and styles since the age of 6 years till 17 where I switched to Jazz music. I used only to sight-read lead sheets but notated from Left to Right, and sometimes the lyrics in Arabic or Amazigh where written L-R which was uncomfortable while reading them.

Just to say that I’m glad to see people here interested about non-western music. Thanks for sharing such vintage examples.

Any chance to reopen the project with them, now that there are technological advancements?

Something I’ve not yet understood is if we can enter aggregate time signatures (to have dashed lines in the middle of a long measure), and and the same time display the final beat count at the numerator.

Looks handwritten to me…