Hello, I need to put some diminished chord symbols in a sheet.

But the plus is a symbol for augmented chords. For all we know Dorico may think you are asking for an augmented diminished chord, which, not being possible, leads to a strange result. Best just to type Ddim and then configure Dorico to display it...

But when I try out to put in

the shown symbol is just Dm b5.

But I need to have the symbol for the whole diminished chords, not just the half diminished.
And as I asked in the other thread:
Is there a list of Mac SC somewhere available?

The best list of keyboard shortcuts is the one that your own copy of Dorico can generate from the Help menu. No list that you find online can be guaranteed to match your keyboard language and your operating system and your custom shortcuts.

Dear gogollny,
There are some concepts you need to understand to work in total peace of mind with Dorico. Shortcuts are extremely configurable. They depend on

There are two files in your system that list all the shortcuts available to YOU. The first one is located inside the app pack, it lists all the default shortcuts for your keyboard layout (which depends on the keyboard language chosen in the macOS preferences). The second one is in your user library/application support/Steinberg/Dorico 3 folder. It adds all of your own shortcuts, so that they are not lost where the app is updated. If the Help menu does not help you (as it should, honestly), you could try and read those json files in a text editor (I use TeXShop which is free). The syntax is understandable, although less clear than the tool provided in the help menu.
You should be aware that some combinations work in some languages and not in others. This is why I have spent some hours localizing Notation Express in French (Philip Rothmann distributes it freely to my fellow French Notation Express users). It’s absolutely not trivial to create a list of shortcuts. I created one in the early days of Dorico 1, and it was already several pages long…
I hope these explanations will help you explore the program with higher efficiency!

Hey Marc, thanx a lot for your detailed answer. That may help. I´ll try to find out.

@ Pianoleo
this answer is a bit too general-I opened the Editor comnd shift L but I could nit find the diminished option, only the one for “big diminished chords”
also in this video 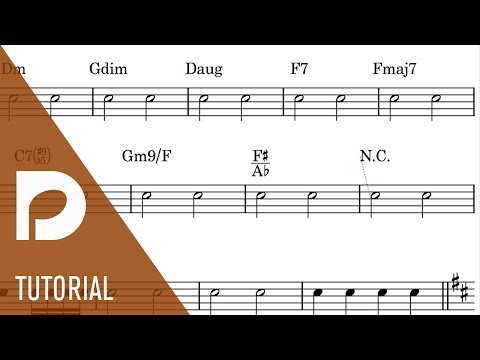 I couldn’t find an answer

where exactly can I define that maybe Ddim or a Symbol with a small circle is displayed for diminished chords?

(And another thing, isn’t it just wrong , to display Dmb5 for a diminished chord, because there is also a diminished 7 in the chord?)

where exactly can I define that maybe Ddim or a Symbol with a small circle is displayed for diminished chords?

And another thing, isn’t it just wrong , to display Dmb5 for a diminished chord, because there is also a diminished 7 in the chord?

Dmb5 I guess is technically correct for a diminished triad, but I can’t say I’ve ever encountered it in use before. There’s no 7th in that chord. Everyone is so used to seeing Dm7b5 that I imagine most people would sightread it as you did and assume there’s a b7 in it and not a bb7. I personally would never use mb5 for a triad as it’s so uncommon and would likely be misread, but I don’t think Dorico is actually wrong here. It’s just a fairly useless option.

Thanx a lot for your answer… sth is really strange here:

when I am in Engrave mode: cmnd shift L
theres a dialog opening without the menu Akkorde /Chords
there is just
Note space
System options etc

when I am in Write mode: cmnd shift L
theres a dialog opening with the word Akkorde /Chords
but if I click on it there is no sub menu with as in your picture with chord symbol presets etc


Where is my mistake??? I sheer a difference between German and English Version?

Cmd-Shift-L is Layout Options.
Cmd-Shift-E is Engraving Options. It’s this one you need.

(And another thing, isn’t it just wrong , to display Dmb5 for a diminished chord, because there is also a diminished 7 in the chord?)

I know that chord notation is not standardized. Dorico even provides several options for the system of chord symbols desired. But in my experience Ddim or D° designates a diminished triad. If you want a diminished seventh chord you have to specify Ddim7 or D°7 (at least in my experience).

Some traditions may treat this differently; apparently Dorico is not one of them.

@gogoliny: Which version of Dorico do you use? If you´re using Dorico SE or Dorico Elements I´m afraid you can´t change it. Chord symbols only have one preset in that versions.
Using cmd-shift-E just doesn´t work in my SE version, but does in my Pro version.

Though I think Dmb5 is formally correct for a diminished triad, I agree with you that it is not very common, I´d also rather prefer D°. Maybe the dorico team can adjust the preset in the future.

Micck, seeing as the OP said “when I am in Engrave mode” in his/her/their last post, I think we can assume that they’re using Dorico Pro.

Using cmd-shift-E just doesn´t work in my SE version, but does in my Pro version.

Micck, what are the default settings when you input a major triad in SE? I’m assuming just None? One of the big issues with major triads in Pro is that all the following options are essentially worthless because to create a dominant 7th chord, Dorico just amends a 7 to whatever the major triad setting is:

…seeing as the OP said “when I am in Engrave mode” in his/her/their last post, I think we can assume that they’re using Dorico Pro.

Correct. It would be nice if as many folks as possible put such info in a signature file in their profile. Still, I realize that requires a bit of knowledge about the forum software that many may not have explored.

Through my Realbook years I learned :


may be thats wrong, but than thats very new, cause as I remember the notation like this in many Jazz Standards.

In classical music like delaMotte it is totally different notated especially when it comes to functional notation.

It would be nice if as many folks as possible put such info in a signature file in their profile.

Through my Realbook years I learned :

I’m guessing you have a typo there as those are the same.

C Eb Gb = Cdim, Co. As pointed out above Dorico also gives the option for Cmb5 which I have never encountered.
C Eb Gb Bb = Cm7b5, Cm7-5, C “circle with line through it” 7. Occasionally you will see the circle with a line through it without the 7 (implied I suppose) but not as common.
C Eb Gb Bbb (A) = Cdim7, Co7

When Dorico went to multiple versions I missed the switch.

Thank you for the nudge.

If it makes you feel better, Derrek, I didn’t update my signature until a few hours ago