То add few improvements, to my previous request here, that I, and probably many others, would love to see:

Hello dear colleagues, I can only completely agree with @FredGUnn. No doubt the requested improvements are needed.

I would like to add just another few things that are of high importance: Fermatas and Breath Marks adjustable playback - Having this function in the Properties panel will make our job easier. Currently if we need to recreate the playback of these symbols, we should manually edit the Tempo curve which isn’t the most correct practice. Ornamentation Playback - Th…

I don’t quite understand this particular request. I have simply put Add-ons in the Expression Map to cover all the various divisi options with the VSL Dimension Strings which works perfectly. As the few libraries which actually implement divisi will do it in a different way, what is it exactly that Dorico should be doing to help here?

Hi @dko22,
Let me make this request of mine more clear.

On the screenshot below you will see the divisi/unis. and Soli & Gli-altri enclosed in red: 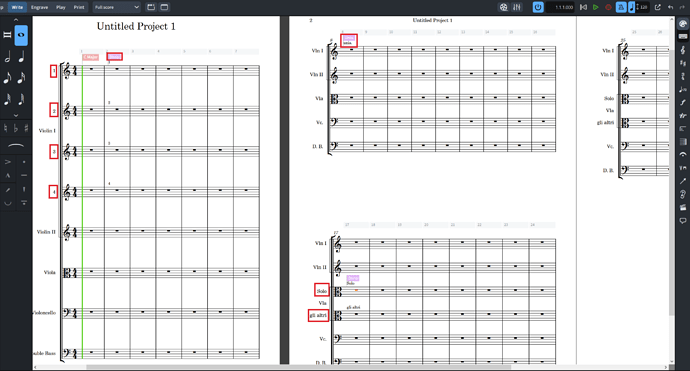 Would be nice if they are available for Expression Maps assignment. Libraries like Dimension Strings will take advantage of such an improvement.
Of course some additions should be created for desks/pulti.

I hope now my point is much more clear!

Hi, in the new version it would be appropriate, in my opinion, to facilitate those who have to transcribe ancient scores (but not only), to have the possibility of greater control over the syllabic correction.
A simple “find and replace” would not be bad, since at the moment, this kind of correction has to be done by hand with inevitable waste of time.
Thank you…

Have you tried the Edit Line of Lyrics dialog?

The Edit Lyrics dialog allows you to view and edit entire lyric lines in one place and with the text displayed with consistent spacing. This is more convenient than changing each word/syllable individually alongside the music, where lyrics can be...

Would it be possible to consider this please?

Hi, yes of course, I use it often, but the problem is that I’m forced to read syllable by syllable and if I have to check the whole score it becomes a problem.
The fact is that hyphenation in the Latin language is different from hyphenation in the Italian language and this leads to errors during transcription, hence the need to have a function that can, in a very short time, facilitate the overall work.
By the way, I’ve noticed that if I want to delete all the syllables from within the verse box, it can’t be done.
Strange right?
Anyway thanks for the answer…
Sincerely…

That’s right, you can’t delete lyrics in the Edit Line of Lyrics dialog, you can only edit them.

Hello dear fellow Doricians,
I would like to few other features that I would love to see in Dorico 5

A couple of requests:

a 5 and 8ve direct correction or alert tool

There are about 30 baroque ornaments included in Bravura. This is perhaps a bit much to ask. But as a first step, it would be nice if the most common ornaments could be reproduced, such as variants of trills, mordents, turns, double cadences.

@Juerg_Loeffler I know it may be hard, but not impossible.

I am engraving BWV 988 at present, and I have the very fine Steinberg harpsichord VST, and I can’t even playback the Aria, as it is strewn with ornaments throughout. Such a pity.

When playing back baroque ornaments, there is an additional difficulty. Especially in slow movements, like the Goldberg Aria, Sarabandes, Loures etc. the execution of the ornaments is highly individual, possibly even more so on the harpsichord than on the piano, because harpsichordists are used to improvising the ornaments according to the context, e.g. in repetitions differently from the first time. So playback can only be an approximation, but at least that would be something.

I must question though: are you trying to make a reasonable demo, or are you trying to have Dorico play like a life-trained harpsichordist? I do think it is reasonable to expect certain limitations when it comes to interpretation. I wouldn’t mind the ability to define a first and second repeat iteration for a specific figure, but ultimately, I’m never going to use dorico to try and produce a professional recording. At some point, a real human needs to get involved.

Ignore for vertical spacing. Having multiple items at the same beat, like rehearsal marks, tempos, text, etc., often creates way more vertical space between systems than is actually required once I’ve manually positioned the items. To be able to click the rehearsal mark once I’ve manually positioned it and check an “Ignore for vertical spacing” checkbox would quickly fix many spacing issues, and would be much faster than manually moving staves around.

I’d add the ability to have Dorico space things by moving them HORIZONTALLY rather than vertically.
This in particular applies to rehearsal marks which can be moved to the left and tempo markings that could be moved to the right, rather than having them one on top of the other.

The same thing would apply to dynamics that are further than a certain amount of space from the staff. There are times where it would be much better to place the dynamic to the left of a notehead rather than below that notehead (which causes a huge gap between staves).

@Romanos I did the whole WTC with Dorico and the Steinberg harpsichord, and it’s really quite superb. Obviously it’s not a human performance - that’s for me (I am a harpsichordist amongst other things) but it is astonishingly good. This is not going out for film score production or anything, but it is fantastically useful for proofing, and actually for students to listen to when learning. I’d like to do the same for BWV 988. Not having a semblance of an ornament rather spoils it all. I guess I want too much. At least let me have mordents.

Well you know (or maybe not, yet, but read on for ten seconds) you can input the notated version of every ornament adding a staff above (or below), writing it down, hiding that extra staff and (obviously) suppressing the playback of the apparent ornated note with the properties. Some more work, obviously, but if it’s really important…