Coming back to this issue - if I release my Dorico project file with a CC BY-SA license, anyone would have to credit me as the creator. Sure, they wouldn’t have to share any revenue they collect. But they would also have to adhere to the same license, so anyone could use thier work, and put it on thier site as well.

I guess I have a bit of a lax attitude about this. I figure if people see my name on the file and want more, they will contact me directly. So it works a bit like advertising.

(I’ve had copyrighted material lifted and claimed as someone else’s - very little remedy for me other than going to court and who can afford that? Complain to the website owner and ask them to take it down - but it usually shows up at another site. And don’t get me started on Spotify)

Just a quick update to say this is still in process. Building the website and database has been a bit more complicated than I thought. Hopefully starting to solicit scores this week or next.

This brings up another question: Say I supply a Dorico file, free to use in anyway the end user sees fit. But I have used Notation Central’s templates. Can I still offer the file?

Yes, the templates aren’t under any sort of copyright. If I’m mistaken, Philip R can set me straight!

I suspect the templates themselves are to be considered copyrighted, but I doubt that the combinations of settings that lead to the templates could be. Someone else could, in theory, come up with very similar engraving settings. So you couldn’t share the templates themselves, but a file generated with a template wouldn’t be the template itself, but rather something else derived from it. The tacit assumption of offering a template is that files will be derived from it. The library manager does complicate things, however, so perhaps it would be wise to tweak a few things away from template defaults, so that even if someone were to look at your file, they would not be getting everything that could otherwise be derived from the template?

Here’s the official line (from the first page of the documentation): 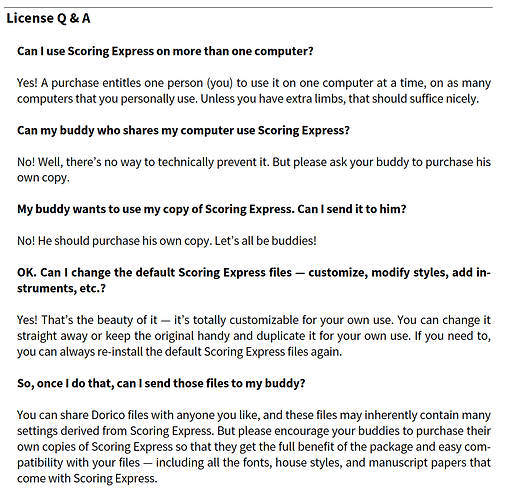 I should probably have picked up on the language about “house styles, and manuscript papers” but I was wrangling with last-minute 4.1 changes at the point at which the documentation was being finalised.

Is there is a side effect of posting a score on a site for public to modify/use that would make it “published”? - That might become a problem if you intend to work with a publisher that desires non-published exclusive deal of some kind. Just a thought to have a care, licenses aside.

I’m somewhat more familiar with it on the audio side where there are horror stories being passed around.

And this confirms my latest thinking on Creative Commons licenses. Yes, I am not allowed to sell thier templates outright - but I can incorporate them into my work, essentially making them freely available for anyone to use. By sharing my work, I am also giving access to theirs.

We all benefit from this generosity/license and those of us who want to support thier hard work will pay for them and help spread the word. Those who don’t, won’t bother with the verbiage of a license to begin with.

Is there is a side effect of posting a score on a site for public to modify/use that would make it “published”? - That might become a problem if you intend to work with a publisher that desires non-published exclusive deal of some kind. Just a thought to have a care, licenses aside.

Yes, posting to public forums would be a form of publishing. This is why I said wayyyyy up the thread multiple times that if it is a work that you want to keep control over, you shouldn’t share it to a site like this. As I said at the time, if you’d share it to CPDL or IMSLP, then share it here. If you wouldn’t, (say, with an eye to do a collaboration with a ‘real’ publisher) then don’t share it online.

I also encouraged Dan to add in the terms of service that one must acknowledge that once a file is downloaded, it is now out in the wild, even if it is later taken back off of the website. You can’t rescind a user’s downloads, as it were. So if you share something under a CC license and then want to publish it, you may have the rights to publish it in addition to the CC versions floating around if you were the originator of the file (I’d have to double check this) but that would in no way impinge upon anyone else continuing to use the CC version. Once it’s out there, it’s out there. There’s no going back.

That’s right. Expect that what you post anywhere on the internet will be freely used by others, often without attribution. And on top of that, your work could be offered for sale by others. Members of the Dorico forum included.

Anyone meowing at this point probably should not offer anything, at least until this site is up and running for some time and the full measure of the venture can be determined.

I am afraid scorico.net, as it stands, is in violation of EU’s cookie law. Particularly the “ * Enable end-users to refuse or withdraw consent as easily as they can give it.” clause. Just a friendly heads-up

That has to do with certain personal data on the servers etc. in the organization’s possession - not copies that were lawfully downloaded by an authorized third party or that might be cached in someone’s browser. There is no obligation or ability to purge the Internet.

Thanks, but the site is not yet officially launched. We will definitely make sure it’s fully compliant with all of the administrative red tape for the EU.

I’m not sure if this is covered in this thread, but what do you think about collaborative projects? For example, I’m currently copying parts of Rossini’s Petite Messe Solennelle, because the horns and trumpets are notated in “outdated” transpositions, and I want to provide a normalized score with horns in F (and trumpets in Bb). However, it’s quite a big work (the conductor’s score is over 400 pages!), and therefore I’m only working on those parts. Maybe some other fragments that could be used for cues, but definitely not the entire score.

But perhaps someone is looking for a new version (and a much better readable one than the current handwritten score/parts from 1800-something that appear to be the basis for even the current commercial printings), and they would like to contribute? Not least because the current score contains many errors and inconsistencies (in the parts I’ve looked at so far, there certainly are many more).

Workflow would have to be quite complex - I guess there would have to be a master document that could be downloaded in order to add parts, but not modified except by a designated maintainer who would supervise the integration of new materials…or something like that. I suspect that Dorico files will never be usable for a GitHub-like scenario, but that’s okay.

IMSLP hosts recopied editions such as this.

I know, and I think it would be a good idea to put the scores there as well once they are completed, but IMSLP doesn’t appear to provide any collaboration tools, either. In the case of LilyPond source files, GitHub repositories can be linked (and that would even make collaboration possible), but that only makes sense for a non-binary file format.

It’s an interesting idea, but building the basic site is proving to be very difficult as it is, with some technical hurdles. Perhaps in the future!

the horns and trumpets are notated in “outdated” transpositions, and I want to provide a normalized score with horns in F (and trumpets in Bb).

If you want to standardize the horn and trumpet transposition, fine and dandy. But I’d suggest making additional parts showing the original transpositions. That should be fairly easy using Dorico.

Rather than B flat trumpet, I’d vote for C trumpet.

The modern trumpet question seems to be one of genre and location. Here in London Bb is very much expected.

A retired professional orchestra librarian advised against this, saying that pro horn (and trumpet) players prefer the old transpositions, even when they change within a composition.

That’s a very good point, and I would never remove the old parts. That’s the beauty of Dorico, it really is very easy: once I’ve written the parts in their original transpositions, I can do the “modern” transpositions with a handful of clicks as additional layouts. @Craig_F showed me how.

I’ve seen several modern orchestral arrangements that provide several parts to choose from, for example Éditions Marc Reift, and that’s kind of what I’m aiming for here. In the case of the orchestra I’m doing this for, these are all amateurs who could transpose the parts themselves, but probably not by sightreading.