Dorico team: I would love to be able to hide slash regions while keeping chord symbols above the bars and any hidden music underneath that plays back.

EDIT: Another possibility is a “blank notation” or “empty bar” region, as mentioned by @FredGUnn below. Ideally, this region could contain underlying music that would play back, like a slash region.

For improvised solo sections of jazz charts, chord slashes are of course the convention, and IMO Dorico’s slash regions are brilliantly implemented.

That said, empty bars would provide space for musicians to pencil in spontaneous ideas during rehearsals and recording sessions.

As I prepared charts for a recording session a few years ago, one of the musicians - a world-renowned performer and producer - asked me to do this. I’d been penciling in ideas in charts many times over the years and always found it annoying to have to work around the slashes. So this immediately made sense. It was a “why didn’t I think of that?” moment.

In Sibelius, where I originally made the charts, it was easy to create empty bars by hiding bar rests, which can be done freely.

Dorico’s restrictions on hiding bar rests have, in some cases, required work-arounds like scaling bar rests or bar repeat regions down to 1 percent to create empty bars. This got the job done - and left me wanting to be able to hide these objects more easily.

But it occurred to me that hiding slash regions would be much more logical because these regions are functionally the same as if the slashes were visible.

While empty bars in solo sections is certainly not common practice in my jazz world, I’ve seen them in a few places, like Chick Corea’s “The Vigil” song book.

You can add an extra staff to the player (provided they’re a solo, not section, player), write the music you want to hear on that staff, then remove it. The music still exists, it still plays back, but doesn’t appear in the music.

You can also use chord symbol regions for showing chord symbols above empty bars, but I believe you’re aware of this from other threads.

Do you ever use Small Slashes in your project? If not, go to Engrave/Notehead Sets/Slashes/Small Slash Noteheads, click the Edit Notehead pencil then delete the small slash noteheads so the entire set is just blank. Apply Slash notation to the bars containing the music you want to hide, then click the Small Slashes checkbox in Properties.

I’ll add that this is very common practice in jazz/pop vocal arrangements, where the pianist needs blank measures to pencil in any cues for themselves, or to write out cues that need to be given to the vocalist. As a feature request, it would be nice if Dorico could have a “Blank notation” style that could be applied to hide any music for playback and yet still display as an empty bar.

@Lillie_Harris I didn’t realize you could remove staves and still have the music play back, so thanks for that!

it would be nice if Dorico could have a “Blank notation” style that could be applied to hide any music for playback and yet still display as an empty bar.

this is very common practice in jazz/pop vocal arrangements

Good to know it’s common in pop vocal arrangements; I’ve rarely seen it in my world (instrumental jazz and, for many years previously, salsa/Cuban dance music).

A "blank notation"region was my first thought. Then it occurred to me that since these would be functionally similar to slash regions, it would make sense to give slash regions a “hidden” Property.

Either one would be fine!

@FredGUnn Thanks for the Small Slashes work-around - it’s the closest solution so far to what I’m requesting. Very clever! (EDIT: On second thought, I do use small slash noteheads, as described in another post below, so I might not be able to do this.)

Still, these, along with the methods in my first post, are all work-arounds. Hide-able slash regions or a “blank measure region” would be much better.

BRILLIANT. This is an easy solution for displaying selected empty bars without bar rests, if user doesn’t want that as a global setting.

Do you ever use Small Slashes in your project?

On second thought, I do use small slashes - not in slash regions, but as noteheads with stems for rhythms in piano, bass, and other (non-percussion) parts.

Does your solution would make them unavailable for this scenario?

If so, then I can’t use it, unfortunately.

I could potentially use another type of notehead, like Xs, for the rhythms, but that’s yet another work-around.

I don’t know how experienced you are with working with notehead sets, but there’s a convoluted step of adding the notehead to the set in the new set, then removing the previous notehead, otherwise when you edit the original small slashes set it will also modify the new one.

No experience, so thanks for this, Fred!

Is your solution project-specific, or will it stick with Dorico for use in other files?

Really appreciate the help, and still I hope Dorico will eventually make these multiple work-arounds unnecessary.

Is your solution project-specific, or will it stick with Dorico for use in other files?

It depends. You can hit the Save as Default star to make it available in other projects, or it can just be for that individual project.

there’s a convoluted step of adding the notehead to the set in the new set, then removing the previous notehead, otherwise when you edit the original small slashes set it will also modify the new one.

@FredGUnn Can you walk me through this please?

I tried, but canceled because something didn’t feel right…I really had no idea what I was doing.

0:40ish into this video I explained this: 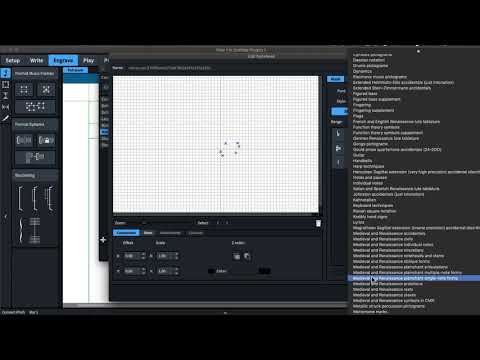 When creating the [renamed] small slash notehead, the glyph that matched the previous one (when I set all the fields in the “Stem” tab to match) was under the “Unicode” tab rather than “SMuFL.”

What exactly do those tabs mean and how do their contents differ?

The glyph you’re using will exist in both tabs, as long as you know where to look.
Possibly simplified explanation, as I’m a simple soul and don’t really understand this stuff:
Unicode is a general standard for organising fonts (primarily text fonts); each glyph is identified by a four-digit hexadecimal codepoint (so each of the four digits can be 0-9 or A-F). The range fields at the top of the Unicode section in Dorico’s various editors allow you to narrow down the range of characters shown - useful if you know the codepoint of the glyph you need

SMuFL is a standard developed by Daniel Spreadbury for organising music fonts. Dorico was the first of the big four notation programs to use SMuFL fonts, but MuseScore and Finale have both taken on the standard, and plenty of other programs-to-do-with-music are also now using SMuFL-compatible music fonts.
SMuFL organises glyphs into categories, and if you click the SMuFL tab in the Notehead Editor you’ll see a dropdown with all those categories. For instance, you probably want the Slash Noteheads category.

Various editors in Dorico give you the option of sorting a font via Unicode range or SMuFL categories, presumably because you may be working with either a text font or a music font (or possibly even a symbol font, e.g. Wingdings). Granted, text fonts aren’t terribly likely in the Notehead Editor, but in the Line Annotations editor or the Playing Techniques editor you may need music glyphs, text glyphs or even both within the same Line Annotation or Playing Technique.
SMuFL categories aren’t any good if you’re hunting around for the Czech accented characters in a text font, but Unicode ranges aren’t necessarily helpful if you’re searching a music font for a notehead (unless you know what the ranges are).

Side-note: has anyone else ever thought, on looking in a conservatoire library, that ink and paper could be saved by knocking the first two digits off the Dewey number on pretty much every item? You can pretty much guarantee it’s going to be 78-something…

Side-note: has anyone else ever thought, on looking in a conservatoire library, that ink and paper could be saved by knocking the first two digits off the Dewey number on pretty much every item?

The question, then, is: Dewey or Don’t we?

Is you is or is you ain’t my Dewey?

I tried adding those to the editor, but they’re larger than the original.

The one that matches the original is U+F4E8 in the Unicode tab.

I went back and checked the Unicode number of the symbols in the SMuFL “Slash Noteheads” category, and none of them are U+F4E8.

In the “Edit Notehead” window, the original small slash notehead’s name is “comp.noteheadSlashVerticalEndsSmallOversized”.

I realized “comp” probably means “composite”, so back in the “Edit Notehead” window, I went to the “Composite” tab and looked for that in the list. It’s present in some Dorico projects but not in others. Why? And is that the correct place to select the symbol?

You’re right; it’s one of the stylistic alternates, according to Slash noteheads · Standard Music Font Layout

I have no idea why it’s present in some projects but not others. Hopefully someone better-informed will pitch in.

Here’s a problem and solution for anyone who might stumble on this:

In 12/8, Dorico places dots next to the rhythm slashes, and they remain after the slashes are deleted.

If there are other ways to remove the dots, I’d love to know.