I accept that guitar tablature will not be in the first release, but even in guitar music notation it has become the norm to put arrows on note stems to indicate the up or down direction of the right hand strumming for flamenco guitarists. The only way I have found to do this effectively in Sibelius is to take up/down symbols and laboriously move them into the correct positions on the stems, which can be very time consuming in a long piece.

Is there any chance that in Dorico there would be the option to choose note stems with an up or down arrow already incorporated as a choice, so that these symbols do not have to be added later? I expect the same option may appeal to other guitarists, or even other instruments that involve indications of this sort.

Could you attach a picture of the sort of thing you mean, Miguel?

Right now we don’t have the option of drawing an arrowhead on the end of a stem, but it’s something we could add at some point.

Hi Daniel, not so easy to find an example when I needed it, but this is an example of a book on sale by David Leiva, one of the leading flamenco artists publishing sheet music at the moment. You will see that there are 4 pages in this example that have arrows on the note stems and in other cases there is even greater use of these arrows in other books that I have. You can view the example here:
http://www.flamencolive.com/libreria/falseta27pacobul1.pdf

Miquel and Daniel – I found a variation of this technique on the Lilypond website: 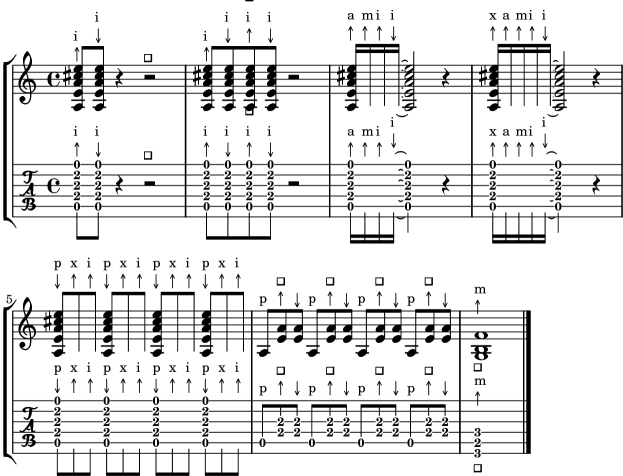 Along with some general information about Flamenco music notation:

The David Leiva transcription above is quite different than the Lilypond website example, but both appear to convey the same information.

I hope this is helpful.

Thank you for finding this example Robert. I have used these type of arrows myself, but it doesn’t help with the main problem that it still takes a lot of time to create and position the arrows. Also, using this technique actually takes up a lot more space on the page which makes the notation look more crowded. I believe that positioning the arrow heads on the stems is the most efficient way of indicating the playing direction, and it looks neater on the page.

Albert, you’re replying to a thread that’s three years old and to a user who hasn’t visited this forum for over two years…

ok. Sorry for that. I searched the topic Flamenco and found this thread. Didn’t realise the date. Now I learned.
Question: For flamenco notation, tabulature. Can I Hide the tab numbers. For example when there are rapid rasguados. Just notate the first chord and than hide the numbers. Just stems and beams. As it is shown in the above example
And: can I turn tab numbers ton slash heads. For rhythmic parts. I tried hard but couldn’t do that. (In Sibelius either not)
Thank you for helping
Albert

You can create slash regions in tablature, but not show regular fret numbers as slashes. You can’t easily hide fret numbers; you could potentially switch off the engraving option to erase the background around them and then colour them to be transparent, but that’ll be a lot of work!