'Go to next marker' triggered with external MIDI jumps to the marker AFTER next, not to the next

Hey everyone, I have a strange issue here:
I want to control all buttons of the transport bar with external MIDI devices using the MIDI Remote Manager.
STOP / PLAY buttons work fine, but when controlling the ‘Go to previous marker’ with a MIDI device, it jumps two marks back, not just one. And likewise when controlling the ‘Go to next marker’, it jumps to the marker after the next marker, not to the next marker where it should. N.B.: The cursor jumps twice in one go: firstly to the first marker and then onward to next one, where it stops.
I tried this from several positions, no change.
I use Cubase 12 on a MacBook Pro 2022, I tried this with two external MIDI devices: a Novation Launchpad Mk3 (Buttons) and a Faderfox PC12 (Knobs). The issue occurred on both devices.
Anyone heard of this? Can anyone try this out with his/her own external devices using the MIDI Remote Manager?

This sounds like it jumps one time when pressing the button, and another time when releasing it.
Is the Value Mode set to Toggle ?

Thanks! I had the same idea, and yes: I changed the Value Mode from Toggle to Jump.
Nothing changed. But I just noted, that when I then hit the button ‘Apply Mapping’, the Value Mode switches from Jump back to Toggle. I can’t get fixed it to Jump (or one of the other three values)

EDIT: Apart from that: I tried this with the Faderfox PC12, which has only knobs without any release. Just touching and moving a knob causes that double-jump, too.
EDIT: Novation Launchpad: When I hold the button pressed (no release), that double-jump happens anyway.

Hello, anybody out there, who would try to control the two ‘Go to’-buttons with a MIDI decide via MIDI Remote Manager to check the issue I had experienced?
I would appreciate that. Thanks in advance.

Works fine for me, the settings are all defaults, same as the following :
Jumps to markers correctly. 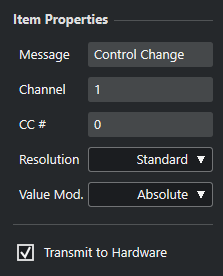 Thanks. Where is this ‘Item Properties’ window?
Did you use the Pick for MIDI Remote Mapping?

Right next to the surface editor when you are in edit mode.
But I see now, if I right-click the transport buttons to catch the function, it indeed jumps two markers like you described.
When I search the function in the Mapping Assistant list, however, it works fine. If you look closely when right-clicking the transport buttons, the function name isn’t the same as the one in the list (it mentions Project Start/End in addition to Go to Previous/Next Marker), and additionally, that exact command simply does not exist in the list.
Clearly, those two buttons are missing from the main Transport category. The ones that work properly are found under Key Commands > Transport. So it may be an issue with a broken function or something that we’re not supposed to use.

Thanks again, @Louis_R . Is it worth to call this a bug and to announce it as a bug? What do you think?
The problem occurs when you consider Cubase as a DAW for life performances – and I’m not sure which way the developers have planned to go in the near future. As ‘MIDI Remote Mapping’ is a quite new feature it seems that they do tend to consider Cubase not only as a studio DAW but also as a tool for life situations.
On the other hand Steinberg recently launched ‘VST life’ as a Mainstage competitor, but it seems not to become a plugin for Cubase.
I read somewhere in the forums that such a session tool like Loops in Apple Logic or the clips in Ableton Life is not planned as well. So, where are they going to go?
I planned to use Cubase for life performances as I like the linear approach sometimes more then the session approach. But then, in life situations you need to jump to a next part of the show within a Cubase project – just by pushing a button and without the need to use a mouse or using a key command. But with this bug it’s really not a proper way …
However, what do you think of all this?

Sure, you can add the Issue tag to the topic. I have added it to the issues wiki as well, whose link is on my profile (click my picture/name).

I agree with you, Cubase lacks some features for live use, such as clip launching like Ableton. This has been requested by many users but there never was any announcement from Steinberg. We can’t know what big new features will come in the next versions, so it’s a surprise every time

Even though they have added MIDI Remote (which is still in development and will keep getting improved), Cubase is still optimized for studio use, for now. I mean, it’s not as good as Ableton or other DAWs for live situations, but that’s still usable.
It wouldn’t surprise me that they will add some great features in the future that will complement nicely with MIDI Remote. They did something really good with MIDI Remote, but that’s just the beginning.

I added the issue tag, thanks again for your support and for adding it to the issues wiki.
I agree with you concerning MIDI Remote, IMO it’s a bit kind of a game changer towards life performing ability. MIDI Remote made me Cubase 12 worth buying. I’m curious what’s about to come in this field.