Hi all,
Is there a compatible brush kit available for Groove Agent? The expansion packs I have don’t appear to have such a thing. Can anyone recommend something?
Thanks.
Chris

Maybe. There is one in the Groove Agent ONE content. 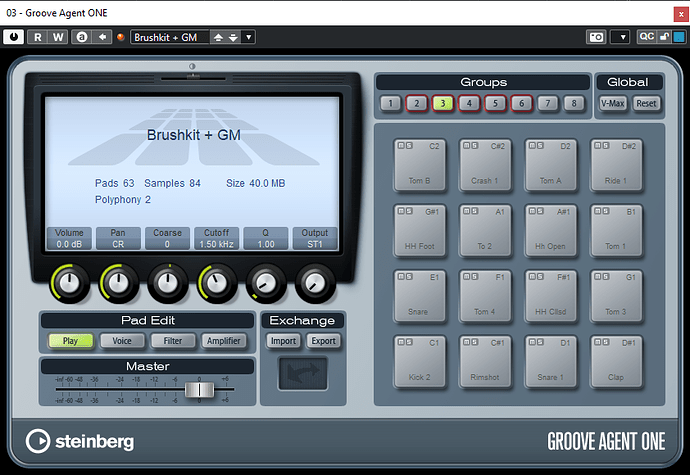 Do you have Cubase or Nuendo installed on the system?

I ask because I’m not sure if Groove Agent 5 comes with the old GA1 content and unlocks it or not. You can read on for more info on how to see if you have the libraries involved on your system. Note, it’s possible this stuff ships with GA 5 and gets unlocked by it as well. I’m just not ‘sure’ since I’ve so many stienberg apps on my system that I’ve lost track on where the involved vstsound files came from.

If you have Cubase or Nuendo installed, then there’s a good chance you have a decent GM brush kit left over from the GA1 days that can be imported into newer versions of GA. It’s nothing fancy, but all the samples are in place to tweak out a nicely mixed brush kit.

(Kit loaded in GA5 after exporting from GA1) 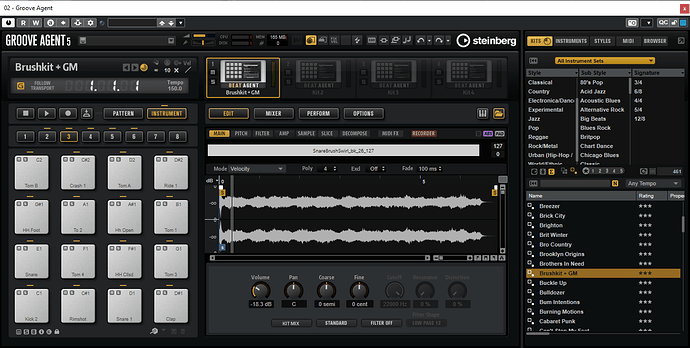 Here’s a sample of the kit playing (quick rendering of a jazz GM file into HALion SE in GM mode, but with chan 10 redirected to this Brush + GM kit hosted in GA5). It’s DRY and RAW. I’ve done no mixing at all other than pulling the volume down a bit directly on the snare-swirl pad, no extra effects, no EQ, no custom panning of pieces, etc…you’re basically hearing the raw kit samples being triggered here…a little fuzzy from rendering to a lossy OGG): All of Me.ogg

A possible shortcut you could try is to download these presets, unzip them, and put them in your GA user preset directory. If those old GA1 libraries are somehow on your system you’re in luck without a bunch of hassle trying to hunt them down.

Please follow up to let me know if these presets work for you should you try them.

I’m not sure about macs, but on windows systems such user presets typically end up in:
"%USERPROFILE%\Documents\VST3 Presets\Steinberg Media Technologies\Groove Agent SE"

If those presets don’t work, read on…

There is a brush kit that originated long ago with Groove Agent ONE content but I think it still exists somewhere in the numerous VSTsound archives that ship with Cubase and Groove Agent SE. I’m not sure how it gets there (I think this library installs on my system as part of Cubase Pro), but I strongly suspect the kits I’m writing about are found in the Groove Agent ONE library: 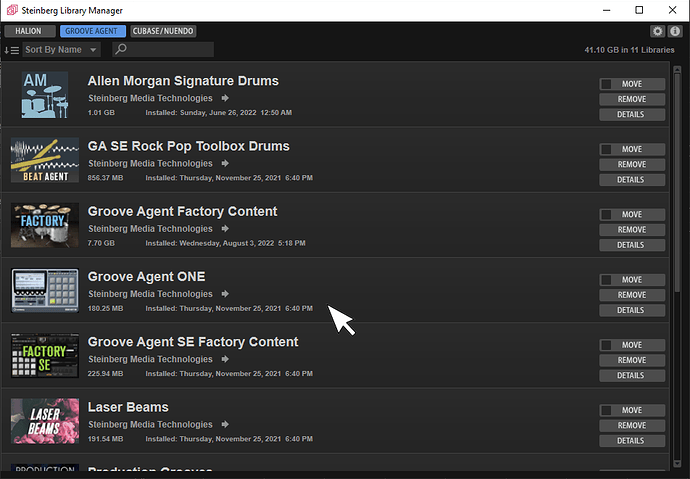 Somehow over time I managed to fiddle around (don’t remember exactly what I did) and end up with presets that have worked for a very long time for me, and continue to do so in the latest versions of Groove Agent.

You won’t see these particular brush kits or samples in the later versions of GA in their built in browsers, but I do see the initial GA1 ‘factory’ preset listed in the main Cubase Media Bay (F5). Yes, the content seems to still be valid even after a number reinstalls of Cubase to entirely new systems (only thing I carry over from back-up archives are those user presets offered above).

If you see the preset but don’t have GA ONE installed, Cubase ‘might’ open GA ONE presets in an instance of the latest GA SE plugin that you have installed; where, you could then export a new user GA preset that’ll hopefully work in newer versions of GA (at some point this worked for me, but I did the conversion YEARS ago and somehow got it into GA4…those presets still work to this day in GA 5 for me. I’ve no idea if the ‘trick’ still works, nor the exact steps I took at the time.).

If that doesn’t work, you could grab the Groove Agent ONE plugin, install it, load the Brushkit preset. You could play it from the GA ONE plugin, or if you like, attempt to save/export it as a new user preset which might then be possible to import into later versions of Groove Agent.

Actually, if your Steinberg Library Manager shows that you do indeed have Groove Agent ONE libraries on your system, and if the Cubase/Nuendo Media Bay isn’t loading them into a modern version of GA SE when you attempt to use them from here; then, I personally recommend grabbing the GA1 plugin for kicks and having a look at the kits it offers. I don’t know why GA4 and GA5 don’t list these old factory presets in their native browsers…

Theory: GA5 can import GA1 presets, but for some reason doesn’t scan for them in the vstsound archives and list them in their content browsers. Perhaps they had a different file naming convention for GA1 and neglected to include that extension for scanning or something? Whatever the issue…back when I was running GA4, while it could NOT see factory GA1 presets, it WAS able to find and import any GA1 presets that I’d saved as ‘user presets’ from inside GA1 itself.

Does the ‘export from GA1, import to a later GA version trick’ still work in GA5? Not sure…as I already had exported a number of GA1 presets on my rig and subsequent ‘user file’ backups. I’d have to ‘remove my user presets’ and do some tests to better confirm these suspicions.

It seems like some time ago, that’s how I may have ended up with the GA SE tagged variant of the preset on my system. I vaguely recall loading it in GA1 first, saving it, to a directory that GA4/5 keeps scanned for user presets (see path earlier in the thread), and it worked!

If you aren’t able to track it down let me know.

Thank you so much for this. I have Cubase 10 and Groove Agent 5 came with that. I will have a look at the link you supplied and see what happens. Thanks again.