Grouping instruments together independently of players

I’m writing for a jazz big band. Both tenor saxes double as flute players, and so the flutes appear on the score in between saxes. I’d like them to appear grouped together, at the top of the score. I still want to keep them with their respective player, because of Dorico’s awesome way of generating parts with automatic instrument changes. Moving players around is not an option either, as I still want the saxes in the right order. Basically I’d like a way to set a custom staff order, regardless of players.

What am I missing ?

Only the Player has a score position, not the instrument. You can’t move the Flute instrument of one Player to be somewhere else.

The tenor players are switching to flutes…

“Traditionally” reed doubles remain grouped by player. If you look at any of the Essentially Ellington scores for example, Jimmy Hamilton’s part remains “Reed 3” whether he’s playing Clarinet or Tenor Sax. 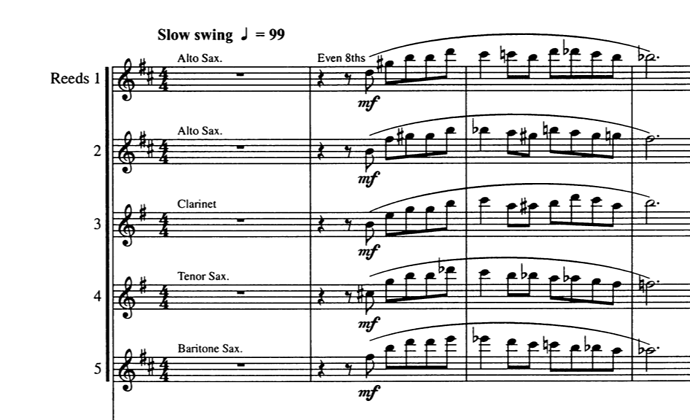 That said, it would be a nice feature to be able to reorder score pages on a page by page basis, but this currently doesn’t exist in Dorico.

@FredGUnn I guess you’re right regarding the final result, and by the way Dorico takes care of the instrument changes in the score too, so that’s great.

My problem happens during the writing phase in galley view: sometimes a particular player will use instruments from different families, it gets messy pretty quickly because these instruments appear side to side, instead of in the ‘orchestral’ order. I think someone else described a similar problem in this post.
Daniel suggested using instrument filters, which I’m already doing (and they’re great), but it does nothing for the instrument order.

So I guess I would appreciate a ‘Sort Instruments’ option in the instrument filter. I think that could be useful in a number of cases, and it would help the writing without touching the way Dorico renders the score (if that makes sense).

Yeah, I’m in agreement with you on Galley view. If you have 5 reed players and they each are playing multiple instruments, Galley quickly becomes a mess. Instrument Filters really are a necessity. There was a recent thread about doubling order here, but I’m not sure there were any solutions (other than in Finale LOL)

With 5 reeds I’m so used to thinking about the particular player and their doubling abilities that it doesn’t really bother me, but I could see certain instrument orderings (like Picc on the bottom if the Bari player is doubling) being pretty disorienting.

Your best bet to achieve what you want (although it’s a workaround) is to use multiple players and then combine the Flute and Tenor Players in the same layout with judicious use of system breaks and “hide empty staves.”