Whenever I open a project I get the following error message:

Some content could not be loaded. Either, licenses are missing, or trial licenses have expired:
VST3 Presets for Flux
Find out more on how to activate your trial licenses permanently, or remove expired licenses.

Background: This started when I updated Cubase to version 9.5. I’m using Cubase with the USB-eLicenser but Dorico is registered to my local machine (soft-eLicenser). When I connect my USB-eLicenser the message disappears.

So my question is: Can I somehow prevent this message without connecting the USB-eLicenser? Any help is appreciated

Is Flux a plug-in you’re using? If not, perhaps you’ve had a trial for this plug-in in the past, and you could uninstall it?

Flux is a HALion Sound Library focused around “Wave Table Synthesis” that comes with Cubase 9.5, and possibly some other Steinberg Hosts (Artist, Nuendo) too. I don’t believe these content packs come with Dorico though.

At some point I believe Cubase also got Trip for HSSE. Cubase also has an older “Hybrid SE Expansion” library which goes way back to something like version 7 that I do not believe comes with Dorico.

In contrast, Dorico comes with HALion Symphonic Orchestra (HSO), which needs either Dorico, or a retail HSO key to work.

As you can see, I am able to load and play Flux based presets in SE, and I can tweak then save/name my own variations of these sounds. I also happen to have keys for HALion 6, and CuBase 9.5 on this particular system, so it works just fine no matter what Host I run HSSE from (Dorico, Sibelius, Finale, Stand Alone mode, whatever). 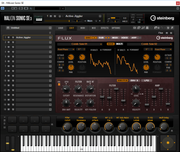 Flux provides a UI macro that users of Sonic 3 and Sonic 3 SE (HSSE3) can use to fashion custom sounds and save them. HALion 6 can play Flux content too, but it can also make and play wavetable sounds using native H6 tools and methods, without the Flux UI macro. Sonic users need the ‘Flux macro UI’ foundation in order to work with/tweak the sounds to a fuller and more feature-rich extent (though Sonic can still use presets involving wave table synthesis without the Flux UI…just not as tweakable, and the bulk of them would need to be built in H6 and later tagged to be playable in Sonic). Most sounds designed for Sonic come with some sort of basic UI macro, and H6 owners can actually design their own ‘Flux-Like’ Custom UI macros if desired (important if one wants to make a library intended to go with the free HSSE player).

Here are a couple of screens worth of HS3, HSSE3, and H6 instances showing examples of some of the Editor UI “Macro Screens” that can be built with HALion Sonic Users in mind. There are already dozens of them produced directly by Stienberg, and now all H6 users can design and make them as well.

Meanwhile in H6, you get the tools to go much deeper into creating sounds, and the simple Macro Interfaces like we see above are totally optional. This only scratches the surface…but here’s a screen shot of H6 all spread out showing various aspects of the same Flux preset I showed you in HSSE a few paragraphs back.

When you get this message about Flux…

Can you just click ‘ignore’ (or something similar) and continue working?

If so, I’d recommend just doing that when you want to run Dorico from the software eLisencer, and your USB key with Cubase isn’t present. From there, simply avoid using Flux/Trip/Hybrid content if it happens to show up in your HSSE instance.


It’s possible to move (to a new location), then make a backup copy to a third location, and then remove (to unregister it from HALion) newer content like Trip and Flux that Dorico can’t unlock when you want to leave your USB key out of the picture. This can be done with the Library Manager that comes with the free Sonic 3 SE Player.

From then on, when you want to reregister these libraries, just double click them and reregister (you can register it from the alternate location, or have it moved back into the directory where registered HALion vstsound files are typically kept). I wish they had an option to deregister and backup Libraries without ‘removing’ the files to the trash can…but oh well. It works if you really need or want to do this.

For older content, such as Hybrid SE…if that gives you trouble, you can move that manually. Have a look in the"Installed" tab of the Library Manager to see what files are involved and where they are kept on the system.

From there you’d use your OS filesystem tools to move the content to some back-up folder well away from this “Content/VSTSound” directory until you need them again.

If you have any user made presets that link to this library in your user/Documents/Stienberg/VSTPresets folder…you’ll probably want to move those to a backup location HALion doesn’t continually scan for content too.


The Library Manager is a side-app. If it did not get installed with your host, you can always grab the latest version of HSSE Player and run the installer. It will update SE to the latest version, and it should also install the library manager. You don’t need the special SE key that gets sent via email if you have Dorico or CuBase keys on the system, but it doesn’t hurt to register it either (Its point is for people releasing 3rd party libraries that can be played on any system that might not have a Strindberg Host).

If Flux/Trip is shipping as part of CuBase, it might be a good idea to get with the HALion people and see if there’s a way make the Dorico key unlock it too, or find some transparent way of hiding the content in such a scenario, or give more detailed information in the pop-up about why the content will not work so users can tap ignore without stress/worry?

I can see how all these keys on multiple eLisencer platforms, and content that ships with different hosts can get confusing. Perhaps people with ‘both’ CuBase and Dorico that run into this ‘hopefully rare’ scenario could apply via email to get some kind of ‘side key’ for the base host content packs only that can go on the eLisencer platform that’s also holding the Dorico key?

Hopefully users can just click ignore and keep right on working if this happens to them…but it can come across as a confusing error that might stress folks out a bit. They mainly just need to know what’s going on…which is essentially…you have some HALion content on the system without the right key (Who needs Trip, Flux, or Hybrid with Dorico on a regular basis anyway?)…just tap ignore if you don’t need it right now, or plug in your dongle!

If it turns out you need it…

I just thought of a method to more easily move these three libraries in and out of play rather easily.

If my theory is correct, you could just make a couple of simple batch files for your OS that moves the files back and forth from some alternate location. Where ever you move it needs to be a directory that isn’t in a path scanned by HALion, nor the CuBase MediaBay system. Though I could be wrong, I’m pretty sure that ‘registering’ the libraries simply consists of putting a shortcut/link in the VSTSound directory (if the actual library file isn’t kept there).

On Wiondows, NTFS Filesystem junctions and Windows short cuts pointing to files are also compatible with HALion, so these can be incorporated as well if you like to keep some stuff on ‘alternate hard-drives/partitions’. I’d imagine that symbolic links also work on Macs.

I might can assist you in making such a batch file, but I’ll need to know what OS you use. If you’re on windows, I’m fairly positive I can help you. If you are on a Mac, I’ll have to do a bit of research (I’ve no clue where HALion VSTsound and VSTpreset files are kept on a Mac)…or someone that knows Mac OS and can test things might chime in and help.

Brian: Your incredible! That answer must have taken you forever! I removed Flux in the Halion Library Manager since I don’t actually use it. The message now disappeared. Thanks a lot!

Daniel: I didn’t install Flux on purpose or any other trial software by Steinberg. It’s part of the Cubase installation and unfortunately then also loads in Halion Sonic SE 3 in Dorico. This constellation of Cubase on USB-Licenser and Dorico on Soft-eLicenser is surely not common. The message was easy to ignore, I just had to press OK and everything worked fine. So probably not a big problem at all. Glad I could fix it anyway.

I believe there was some wrong information in my post about Flux. I’ve edited out the mistake.

I had stated that it comes with the products Sonic 3 and HALion 6. That may be incorrect. Flux does not ship with HS3/H6.

I now believe the Flux content is specific to CuBase 9.5 and requires a CuBase key.

This should lead to the installation of Flux plug-in (comes with HS SE 3 with your license for Cubase 9.5)

The problem should get fixed.

Rommelsharma this sounds logical but did NOT fix the issue for me. Win10, Cubase9.0
Anyone else ?

EDIT: Completely removing the library in Halion Manager was the only solution to the annoying pop-up. Steinberg, please do not include pop-ups when starting Cubase because this hangs the loading of our sessions, requiring user intervention to continue loading.

I had the same problem with Dorico 3 Elements.
It´s solved now -

(I installed a Cubase trial version some time ago. Apparently the library comes with it and is not removed on unistalling the Cubase trial software.)