We are pleased to announce the release of a new version of the Yamaha Steinberg USB driver for Mac.
The version 2.0.2 now ensures compatibility with macOS Catalina and resolves some minor issues.
For detailed information, we ask you to refer to the corresponding version history on the download page.
Best regards,
Stefan Schreiber

No success on 10.15.1. I don’t have a System Preferences panel like I did previously and no audio devices are available for input or output under Sound settings.

I have installed it and it does NOT work.

Another issue was that my interface appeared twice in the list. After running several uninstaller and installing version 2.0.2 again, this problem was solved but the problems above have persisted all the time.

and in Audio MIDI setup 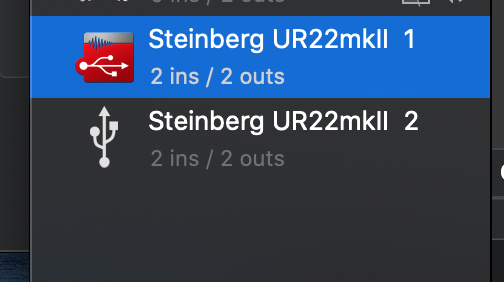 but then it doesn’t work at all, no input signal and no output signal

It doesn’t work for my system: Mac OSX 10.15.1, MOXF USB Interface. Two instances of the Yamaha MOXF6/MOXF8 USB driver are now listed in my DAW and neither works. No sound is produced when playing any audio application. Once it’s removed the sound is restored and I’m able to use by DAW with my MOXF again.

After uninstalling the 2.0.2 driver, there is still a driver listed, and that seems to work so I don’t know if installing 2.0.2 is maintaining the previous instance as well as the new instance.

After looking into this further, I have the following additional observations:

When the new driver is installed:

When the new driver is uninstalled:

If anyone can provide some strategies for how I can identify and resolve this problem, that would be fantastic!

I am seeing to (2) steinberg UR22mkII in my sound menu. One that displaysnothing under type and the other that displays USB

Weirdest thing is that this glitch is messing up any playback on my internet. It is affecting my entire system until I unplug I go back to internal.

I uninstalled the 2.0.2 driver and vst and sound works except audio inputs. I am still seeing Steinberg USB in my sound card.
PLEASE HELP!

I saw the new driver for the UR22mkii but when I install the Yamaha USB driver, my Mac doesn’t recognize the device. Has anyone got this to work?

I have a ticket into Steinberg for my USB 2.0.2 issues and will let everyone here know how they resolve it. The ticket is a week old as of today.

UPDATE: I received Steinberg support today and it was determined that the problem may be with my Yamaha MOXF’s sound card. A help ticket was opened with Yamaha by Steinberg.

It’s not working in Catalina for me either, although it did last night when first installed. I monitored through it for a solid 100 minutes.

However, today I launched Ableton etc, went to preferences, and ableton gave me a warning about not supporting devices that dont have stereo inputs, which was odd. THen, even more oddly, Ableton decided to stop seeing it entirely after about 5-6 attempts to select it again.

I reinstalled 2.0.2 and it didn’t do anything. Still, no ID from Ableton. Strange that it worked the night before.

Steinberg, I want to have empathy about Apple and their horrendous application security (why is it scanning every app every time, I just want to turn my music computer off of the net anyway), but I also have a deprecated MR816x and going back to pre Catalina, when it actually has a decent finder, and Ableton and everyone else’s VST AU seem to be running fine. You look like the odd one out.

If you’re getting out of the business, that’s one thing, but if you’re staying in, better spend the money on the coding. This is a big step, and mac won’t make that step again for a long time, so the rewrite will last a while. You’ll make people trust your brand, always important. High Sierra won’t run Ableton X better, you have to catch up. This is a ten year old interface, and firewire is done on the Mac.

Yeah, it’s prob a mac problem, though you aren’t supporting the PC side on the MR816X either. What a waste of decent gear. Why isn’t someone third party getting into this? Too much investment, not enough users.

Got my UR22 working last night in ABleton X on Catalina, and everything was fine, at least just monitoring. Today, fired it up, Ableton saw it but didn’t like it and said it didn’t vibe with something without stereo inputs? THen eventually it stopped seeing it completely, even after re install of newest driver. This stuff sucks. Glad I had no appts.

Now that Christmas is over, I hope Steinberg gets back to work and fixes this driver. This is unacceptable that a product I bought two years ago is not working. What’s more pathetic is that the $800 plus interface I bought only four years ago is now deprecated. It’s the solidest interface I’ve owned, and yet now it’s going to be dead for zero reason other than you guys can’t update the drivers. I’m not having any other problems in Ableton X with any vsts, even the nightmare that is Waves, so maybe you should look inward, and give us drivers that work.

I’m looking at Focusrite now, since I can’t get any justice here.

Just bought the ur22c and did not enough research obviously. Had I seen these problem reports I would have bought something else.

I have the same problem as many report here - as soon as I install the driver and reboot, the ur22c is not available anymore in the system. On Mac OS Mojave.

UPDATE (all my useless complaining removed):

With the help of Steinberg support, who, I must mention honorably, worked and repsoned relatively quickly even on the 30th of december and 2nd of january, I found out that you must allow the yamaha steinberg usb driver in mac preferences “security” section.
It’s stated in point 5 of the mac installtion instructions in fine print.

I told the Steinberg guy after thanking for the solution that this installation instructions could be shrinked to fit the exact product and OS we use it for, and hightlight this thing instead of fineprinting it, so the information is more likely to be found…

hello,
i’ve been using my ur22 for many years now since mojave, then i upgraded to catalina after the new updated firmware was released.
the installer kept giving me the same error. i’ve done this:

-uninstall using the uninstaller
-reboot
-installed driver many times. repeatedly
-i’ve check my security and privacy settings and everything is normal, no need to allow
-i’ve called steinberg and they told me to do everything i’ve already done.
-i’ve downgraded back to mojave and still nothings.
-called apple many times and they don’t even know
-i tried a fresh clean install of mojave in a external hd and BOOM its worked perfectly. not too sure what happened.

i keep getting the same error. i will attach a screenshot below.
im currently on the latest Mojave and still stuck. please help. thnx

2.0.2 Mac USB driver; Catalina 10.15.2. Reboot, then installation says “Installation failed” after entering password and clicking on “Continue Installation” when it tells you you must restart after installation. I see it get as far as “Validating packages” before throwing the error. Nothing shows up in Preferences/Security & Privacy.

I can’t remove /Library/Extensions/YamahaSteinbergUSBAudio.kext even if I sudo it and even if I go to Security and Privacy and give Terminal “Full Disk Access.” The uninstaller app that comes with the driver package apparently doesn’t remove it.

Now that Christmas is over, I hope Steinberg gets back to work and fixes this driver. This is unacceptable that a product I bought two years ago is not working. What’s more pathetic is that the $800 plus interface I bought only four years ago is now deprecated. It’s the solidest interface I’ve owned, and yet now it’s going to be dead for zero reason other than you guys can’t update the drivers. I’m not having any other problems in Ableton X with any vsts, even the nightmare that is Waves, so maybe you should look inward, and give us drivers that work.

I’m looking at Focusrite now, since I can’t get any justice here.

And here I am with my UR22 that won’t work under macOS 10.15.2. I bought the UR22 after Tascam abandoned development for one of their audio/MIDI interfaces and it became a boat anchor after an OS update. Didn’t think Steinberg would leave me in the same boat only four years later.

NO NEWS YET on the uneffectiveness of “Hardware USB driver version 2.0.2 for Mac”
Is there any answer from anywhere that makes CUBASE PRO see and work with the UR22mkII ?
Please YAMAHA friends DO SOMETHING ABOUT IT !