Help with playback of baroque ornaments

I asked about this some months ago but I’m sorry to say I completely failed to understand how add ossia staves or whatever to manually write out the ornaments for playback but not have that appear in the score. Would somebody be so kind as to make an actual Dorico project that demonstrates how to do this? This will be enough to get me going: 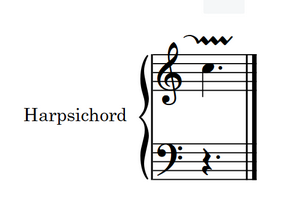 Don’t use an ossia since they don’t play back but use an additional staff. So, without regard for the correct interpretation of the ornament:
ExampleOrnamentPlayback.dorico (494.3 KB)

I am the biggest dolt on the forum. The example is good, but I obviously don’t want the extra staff displayed, and I have no idea how the trill you nicely did plays on the next note, without the additional staff. Could you elaborate?

I copied bar 2 into bar three (all three staves) and then removed the top staff starting in bar 3. Even though it’s removed it still plays. The dotted quarter in bars 2 and 3 has its playback suppressed (hence the grey tone of the note). I don’t believe the color of the note affects the printout.

@tbabcock123 I am starting to comprehend. But you did not answer yet how to remove the first extra staff. Is it that it can’t be done? In which case I will abandon this idea and live without ornaments in playback. I think this may be what is causing my confusion.

What I am asking is can you remove the staff with the written out trill? And if you can, then how can you edit ornaments if the staff is hidden?

In the example the staff with the written out trill (bar 2) is the same as bar 3 with that staff hidden. If you remove the staff with the written out trill it will still play. I don’t know how it can be made any more plain. The first bar doesn’t play because there is no ‘hidden’ staff associated with it. This is just an example to show you how it’s done. You could remove bar 2 altogether using the system track and the bar (now 2 formerly 3) would still play, its playback is NOT dependent on bar 2. If you want to edit the written out trill in the hidden staff you can add the staff back to reveal the hidden notes. I made a short video. Unfortunately the right-click menu is cut-off but it should still communicate the idea.

@tbabcock123 Thanks so much. I’m aiming to get the Dorico Dolt of the Year Award just before the year is out.

This is going to be very helpful. Appreciated.

Don’t put yourself down.

Just for the record: The trill symbol in your example - which I know has no musical context - in Bach’s and many others’ practice specifies a start with a turn from below (first three notes b-c-d) and I am not quite sure where the the two last notes (b-d) come from. For your interpretation the initial “circle” of the symbol should start from above.
More importantly regarding playback: Most harpsichordists that I know employ a vast range of subtle rubato-effects when it comes to ornaments and especially in slow-tempo contexts (“leaning” slightly on a dissonant upper note, accellerating - or even decellerating - a long trill, pausing slightly before a termination (and often articulating slightly after it), as well as not always playing the hands exactly together! All this calls for a quite complex rhythmical notation in your “interpretation”-stave. The straight and even 32nds - as in your example and in most contemporary ornament tables - are definitely not “the whole truth”…

@lumortensen Thanks. The responder did point out he was not familiar with all the details of the ornaments, and that is not the topic under discussion.

I am also a harpsichordist and harpsichord maker and I am fully aware of the subtleties of ornamentation in performance. But you have rather missed the idea- this is not a discussion about how to make a totally humanized performance with Dorico good enough to fool people, there was no mention of that. This is purely for my use. I’m currently setting BWV 988, full of ornamentation. I use the very nice Steinberg 1734 Vater VST to playback purely for proofing. It’s much faster than a visual scan for wrong pitches and missing ties and so on. But I also happen to enjoy listening to it anyway, and I’d really quite like to have the ornaments in. Otherwise it sounds very clunky. Having Dorico do at least a basic attempt at playback of ornaments of this period would be better than nothing, and there are quite a few people who have requested this apart from me.

As for humanization of ornaments, this is not something for notationally expressing, but can be done in the key editor or a DAW if really desired. Interpretation of that order is not the job of Dorico. Producers of any type of commercial music will tweak in the DAW.

The current project is a scholarly edition of BWV from the first edition by Schmid of 1741, with the emendations by Bach, and using the original clefs (horror!). It attempts to be free of the criticisms of the Barenreiter edition (of which there are many) and free from the annoying piano fingerings of the Henle and others. This will be a free score, with a luxe hardbound commercial edition as well.

Is there a good document for these practices? It would be something I would be interested in learning.

My organic chemistry professor in undergrad was a harpsichordist and harpsichord maker - small world!

I suppose you could also just create the staff and use manual staff visibility in engrave mode to just hide it. Then you wouldn’t need to create/hide the bar everytime you would want to make a change, but you could have a special layout where all staves are shown for editing purposes only. Manual staff visibility is Lay-out specific, while adding/removing staves is global.