Hi, I need to hide some notes but I can’t find this option anywhere. There should be a possibility to hide anything like in Finale but if such option exists it’s well hidden.

If anyone has a clue, thank you very much.

The thinking behind Dorico is somewhat different to Finale. Generally speaking the developers want to know why you want to do something, and then provide specific tools to enable you to do that thing in a way that is semantically appropriate.

Playing Techniques (that can be visible or invisible, on a per-layout basis) trigger Playback Techniques that can (via Expression Maps) trigger key switches.

It’s possible to define a notehead set with noteheads that are a couple of text spaces, then use that notehead, then use the Hide Stem property in the Engrave Mode properties panel, but do get specific about what it is you’re trying to achieve as there may well be specific functionality that’s less workaround-y.

Thanks for the answer. Yet :

My problem is that I want to have a staff with slash region + rhythmic cue notes on top but also writing chords but setting them as hidden in the only purpose of playback (so when I send the demo to the musician I want them to hear chords in place but that they only see slash + rythmic cue in the score, I hope I’m clear).

Playing Techniques (that can be visible or invisible, on a per-layout basis) trigger Playback Techniques that can (via Expression Maps) trigger key switches.

I don’t like expression maps, I prefer using keyswitches (old habit from Cubase I guess). I would really like to be able to choose my favorite way of programming playing techniques.

It’s possible to define a notehead set with noteheads that are a couple of text spaces, then use that notehead, then use the Hide Stem property in the Engrave Mode properties panel, but do get specific about what it is you’re trying to achieve as there may well be specific functionality that’s less workaround-y.

That seems very complicated and time consuming. Again, to me it would way much simpler to have the liberty to hide anything in Engrave mode.

In addition to my problem of hidden chords in a slash region+cue my second goal is to create exercises for students with only a few notes in the score so they write the missing ones. But I want to easily change witch ones are hidden according to the level of the exercise.

Chords are a separate (system) track. You can add them and then tell them not to show for any or all players, and if activated in Play mode, they should sound nevertheless.

Dorico is a capable program and (once one has learned it) easy enough to use for a sophisticated program–so long as one does not expect it to mimic other, older programs.

(And I say that as one who has used Finale since its inception and uses it still.)

In addition to my problem of hidden chords in a slash region+cue my second goal is to create exercises for students with only a few notes in the score so they write the missing ones. But I want to easily change witch ones are hidden according to the level of the exercise.

I too would love some easier ways to hide elements, but the developers seem very much against it so it’s not likely to happen. You can however hide a lot of elements by setting the Properties/Color/Alpha channel to 0. I’ve created a custom shortcut of Ctrl+Alt+H for this by adding the following line to the kGlobal context in my keycommands file:

You’ll need to export PDFs in color though for the alpha channel to be active, but I just do this by default now.

In the below example, students are supposed to continue the pattern and fill in the 3-note left hand voicing. Notes were hidden with Alpha Channel 0, stems, accidentals, and ledger lines with Properties. Since the notes are actually there, the exercise will still play back correctly if needed.

EDIT: I hadn’t refreshed and Dan beat me to it. His video shows how to do the alpha channel trick.

Thanks for these answers @dankreider and @FredGUnn . Your solution is clever yet time consuming.
Indeed I really don’t know why they don’t allow users to do what they want. Being able to hide anything is a simple and easy request, no one would be forced to use it but it appears to be some kind of fundamental “religious” principle apparently…

As per the Youtube video, you can hide a selected note or group of notes in seconds. It might be two steps instead of one, but it’s easy to achieve…

yes but what about this kind of figure

If I want the playback to play chords as indicated I’ll have to set chords many times and even though it won’t be the voicing I wanted. But if I write the chords I can’t have the rhythmic cue at the same time.

It’s a PITA but it can be done. Start with this (or whatever voicing you want):

Suppress playback of the top cue note. Hide the other notes with alpha channel 0. Scale down the ties. Apply slash notation and show other voices. The slashes will be in the wrong position so set the position to 0. The spacing will be screwed up too because of the “hidden” notes so you’ll need to select the chords you hid and change the voice column index. It’s a bit convoluted but after doing all that you’ll have this where the chords play back correctly and the cue notes don’t:

Or add a second player with the chords you want to hear in playback but that you can exclude from the part layout that you eventually want to print?

I find it less convoluted to have:
One instrument for playback that’s then hidden via Manual Staff Visibility.
One other instrument that shows chord symbols and has Rhythmic Cues from the staff above.

Rhythmic Cues from the staff above

I’m not sure exactly what his project is, but in lead sheet notation there’s typically no staff to cue from, so he’d need to enter it manually and suppress playback in that situation. If this is a part that will show in a larger score, cues won’t default to show in a score, so again he’d need to do it manually. If he isn’t using any other cues then he could cue it and turn on Layout Options/Players/Show Cues so it would show in a score layout of course.

No, I mean building a separate stave that is just for playback and to cue from. I’ll put together a demo in a sec.

Oh sure, I was just trying to show it could be done all in one staff. I use separate staves for drum notation and playback all the time because of the limitations of percussion staves.

I mean like this. There’s nothing individual to hide, nothing to colour white, nothing to manually respace, and it’ll play back perfectly without any fiddling. 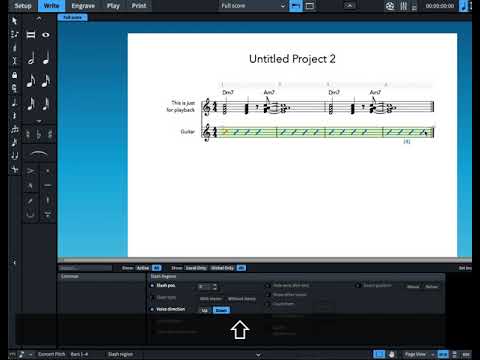 That works fine of course, but it’s still a bunch of extra steps including adding another staff, etc. This could be greatly simplified if the developers would simply give us a Hide command. There could be a preferences setting to specify display opacity of hidden notes.

Obviously I left the ties and stems visible as there’s no current way to modify their opacity, but a Hide command could end up with a result looking something like this:

Sure, but it’s been explained before that Dorico’s architecture isn’t such that a global hide can be applied, any more than a global colouring option exists. It looks like we have global colouring, but as your screenshot demonstrates, the functionality depends on someone expending time and energy on making each different type of item colourable separately. It would seem to go against Dorico’s ethos to make everything hide-able, but also there’s a significant cost factor.

Thank you @FredGUnn @pianoleo @Lillie_Harris for you clever solution. Yet it stays complicated but I guess I’ll have to do this way or go back to Finale.

This could be greatly simplified if the developers would simply give us a Hide command. There could be a preferences setting to specify display opacity of hidden notes.

It would seem to go against Dorico’s ethos to make everything hide-able, but also there’s a significant cost factor.

Indeed, it would be so much easier to let people hide what they want to hide, if they want to, instead of constraining them to join some kind of philosophy. I think the choice should be let to the users to use or not a feature.
And I’m not sure that developing such a feature would be so costly.

Anyway coming from Finale I find it very unfortunate to regret it sometimes just because a basic feature isn’t available !

I meant “costly” in terms of it taking up development time that could otherwise be spent developing other features. For instance, Text can now be hidden. Playing Techniques can now also be hidden, but via a slightly different mechanism. Notes can be coloured but their stems and beams can’t (because they’re different types of objects and would need different code in order to make them colourable).

There’s also always the question of what should happen to the spacing if an object is hidden; something that’s handled completely differently in Finale. In Dorico, if you add an object, Dorico automatically creates space for it. If you hide that item, Dorico has to work out whether the space created by that item should be removed or not. If it’s a Playing Technique that’s solely for playback, or a text item that doesn’t need to be shown in e.g. the score layout (like “V.S” at the end of page) Dorico doesn’t need to provide space for that hidden item. If you’re hiding some notes because you want your students to fill in the blanks, you want the space to be left on the page in order that your students have somewhere to write in the missing notes.

It can’t be “a basic feature”, because one size simply can’t fit all.