How to move events grid relative in Cubasis

Tap on event to highlight it

What do you mean by middel of the event bar? To be more precise: the audio event I want to move is randomly cut and not lined up with the grid! So if I try to move vertically it with the grid OFF , it also moves horizontally and is not lined up with the rest of the audio . When I turn the grid on then it snaps to the nearest grid point and moves horizontally. So I need to move it GRID RELATIVE: a function that Cubase for example has.

Or duplicate track and removing everything you dont need

If I copy/paste it it sticks the scroll bar…. 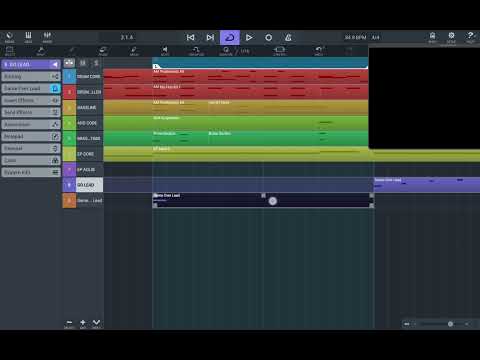 Offcourse I can duplicate the whole track and delete everything that I don’t need… but that’s laborious way of doing things…
I’ll refrase again: why is there no grid relative button in Cubasis? And if this is purposely omitted: how can I approach this problem?

That’s very nice but you didn’t cut the audio randomly but aligned with the grid. I don’t think you understanding my question. Do you know what grid relative means?

If thats not what you mean then sorry i dont understand
You said you couldnt move events vertically so that what i responded to
Anyways, sorry

Thanks for the effort, but you don’t understand what I mean.

While I’m afraid it’s not what you’re looking for, here is a short video that shows the available options in Cubasis, when using the grid option.

That’s indeed not what I’m looking for. Grid relative movement is such a basic feature to me that I’m very much surprised that it is not implemented in Cubasis …! If you deal with live recordings, musicians don’t stick to a grid. And even when the metronome is used, some musicians are early or late in regard to the beat, which makes it necessary to cut their parts slightly outside grid.
I’m even more surprised that their is not a host people agreeing with me.
This omission is for me a reason to look into other DAWs that run on an IPad Pro. Can you tell me if and/or when this feature will be implemented?

Thank you for your message.

While Cubasis is aimed to be improved with every update, I have no further information to share about your feature request unfortunately.

You want a horizontal grid lock for events…

Pfff… you’re not helping. Just Google: Cubase grid relative. Please stay out of discussion you don’t know anything about!

Ok. So we have established that Cubasis doesn’t have a snap type called Grid Relative, which it’s bigger brother cubase allready had in version 3 or even before that. So how would your team advise me to proceed if I want to move an audio event that is not cut to the grid vertically to another track without changing it’s horizontal position?

If this option is activated, events and parts are not magnetic to the grid. Rather, the grid determines the step size for moving the events. This means that a moved event keeps its original position relative to the grid.

Grid relative pertains to events that start between grid lines and can repeat them on the same track
It says nothing about a horizontal grid lock so you can move/copy paste to other tracks.
Basically it has nothing to do with moving events vertically, never the less you can use it to move it to the same position on other tracks but thats not what it is specifically made for.

So even if i knew the term you would be making no sense because you explain your problem so crooked.

Good luck with waiting on this feature
A simple grid in the minisampler to make it easy to edit samples is taking how long for thsm to implent? And multiple people asked for this.

Yoy cant even pinch zoom verically which is the standard on touchscreens but you want your need to be implented asap.

Good luck with that.

Politeness is a virtue… First you say lol, now my explanation is crooked…. I think I was very clear about what I meant. Anybody working with DAWs and Cubase in particular know what Grid Relative means. You might expect the guys from Steinberg developing Cubasis to know what I’m talking about.

Are you planning to answer my question in the near future?

Are you planning to answer my question in the near future?

I already did. Unfortunately we have no further information about your feature request for now.