I’m trying to input this bar from an Intermezzo by Brahms.
At the third and final eighth of the bar there are two sixteenth two-note chords, which are split between the two staves. I can’t reproduce this in Dorico. The problem seems to lie in the beam being positioned between the two notes and not above or below them. When I chose the two notes and made them cross staff Dorico automatically moved the beam up. I had to go to Engrave Mode and pull it to the middle, but then, as can be seen in the attached file, the stem fails to move to the right side of the noteheads (or more precisely, the notehead failed to move to the left side of the stem).
And another glitch that has occurred is that slur which is supposed to be between the D and G in the left hand - somehow because of the cross-staff shenanigans it got flung out of place…
Is there currently any way of making this work? And would this be something you’d consider making Dorico do automatically? 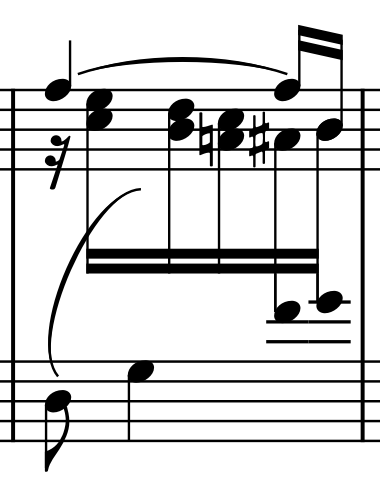 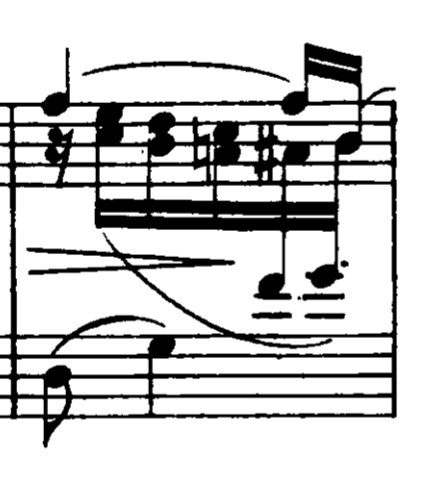 I’m afraid there’s no good way of making this work at the moment, no. Stems proceeding in both directions at the same rhythmic position from the same beam is more or less the only kind of cross-staff/between staves beaming Dorico cannot handle, and although it’s rare there are certainly other examples, in e.g. Xenakis, among others. I would certainly not rule out adding support for this in the future, but it’s not going to be something we do very soon, I suspect.

Is there anything new since this last post? Or maybe a workaround?
Thanks

The Simrock edition of that particular bar looks like this: 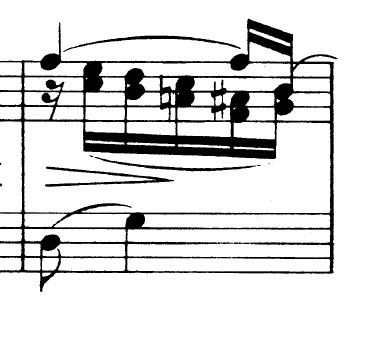 as does the Universal edition: 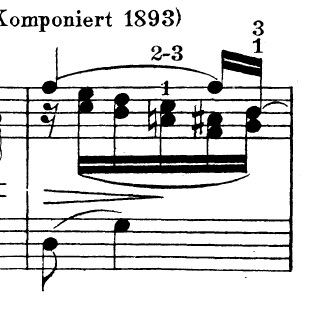 The edition you have used for your example looks like the Peters edition.

Given that Dorico can not yet handle the look you are trying to achieve, I would humbly suggest notating it as in the Simrock and Universal editions which, at least for my brain, is a touch easier to decipher. It also appears to take up a little less room on the page and the diminuendo hairpin does not collide with the slur.

It’s a bit of a fudge, but it it might just do the trick. 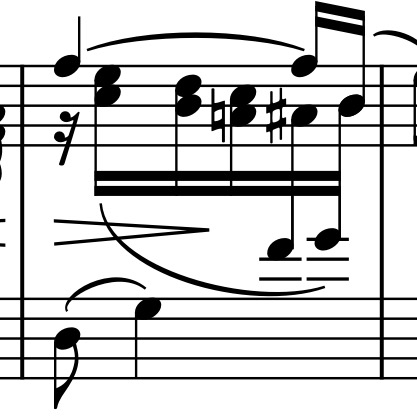 As shown in the second image, I added a note above each of the last two 16ths between the staves and then moved them down to become unisons. This had the effect of pushing one of the noteheads to the left of the stem. I then selected the noteheads on the righthand side of the stem and scaled them to 0% in Properties - this can be done in either Write or Engrave mode. 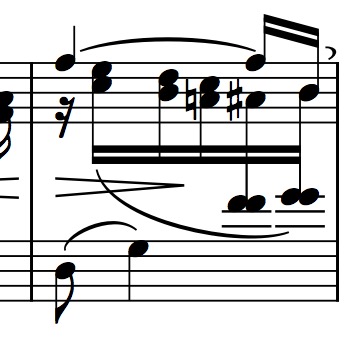 That was the easy part!

Once the slurs and diminuendo hairpin had been added, Dorico’s automatic collision avoidance kicked in and started moving things away from each other, as it has been designed to do.

To get the vertical spacing right, I had to just keep fiddling around with dragging the 16th beam up and down, re-positioning the slurs and hairpin, and using Staff Spacing in Engrave mode.
I eventually got there.

If you zoom in on the notes, you will see a slight protrusion of the stem, as indicated by the red arrow. This might (or might not) be unnoticeable when it is reduced to normal size. 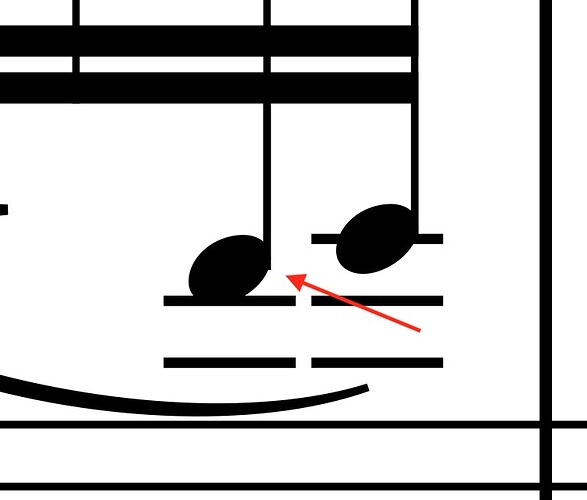 One last thing - when I opened your file, Dorico informed me that it had been created in an earlier version of Dorico. The edited version I have put here was saved in the latest version (3.5.12). I don’t know whether your version will be able to open it.

Thanks stevenjones01 for the answer and the workaround.

I will try to see if it is not too tedious.There are many similar cases in the partition I have to engrave.
The file was not mine so I was able to open your attachment .
Thanks again for the quick response

I have just noticed that the vertical alignment between notes in the top and bottom staves is not correct for the 1/4-note G in the bass. The note spacing has probably been adjusted sometime in the past. You might find that re-aligning things could get a bit tricky given the amount of manipulation that this bar has undergone already. I would definitely do any experimenting on a copy of the document, rather than the original, just in case things become irretrievably messed up.

This looks a bit closer to what it should be:
Brahms Intermezzo - edited v2.dorico (469.6 KB) 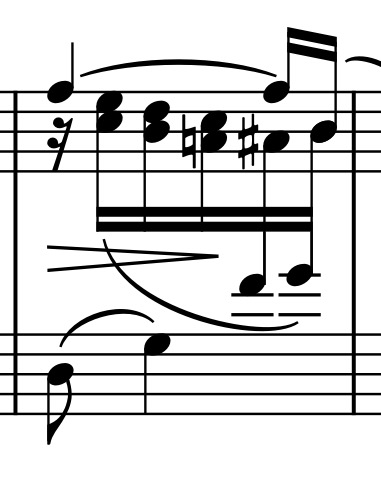 Here is another conundrum from the same Intermezzo. I’m trying to use the “Custom Centered Beam…” dialog to force the stems on the last three left-hand notes, but I can’t get it to work, whether or not these notes are originally in the RH or LH. (But the same dialog works fantastically well for the beamed E to D in the right hand - Schenker fans rejoice!) Any help or advice is welcome! 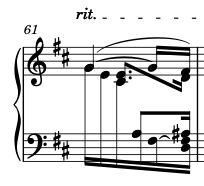 Have you tried originating the bass voice from the bass staff? Mostly works for me. Sorry have not had tiem to do your example.

Thanks - I’ve tried originating the 16ths in the top staff, and the bottom staff, but I still get this same result.

Like that ? Honestly, I don’t know what result you’re after… I had to re-enter the last four notes (three 16th)
[Edit] you’ll probably want to reset the column index of the A in the low staff so that the notes overlap like in this example.
Brahms Vier Klavierstücke.dorico (1.0 MB) 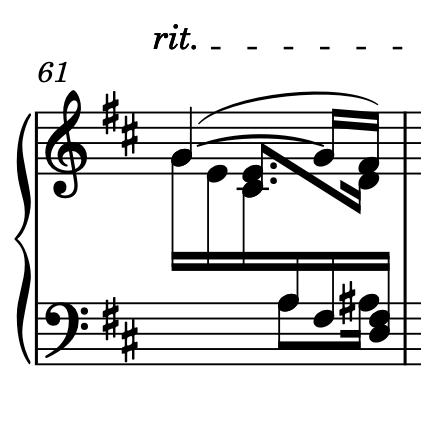 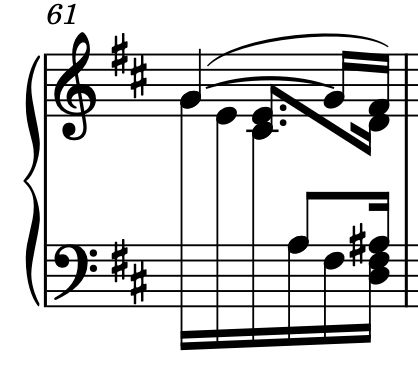 The trick was to give the [C# E] another voice colum index so that I could select them properly before invoking the Custom Centered Beam (great feature with its own Edit window, waouh!)
Then everything is pretty simple.

Merci beaucoup! For some reason, the Custom Centered Beam dialog doesn’t work for me if I have cross-staff notes. The dialog box is blank, even for your file, which otherwise works great on my MacBook Pro.

But at least it’s working, thanks again! 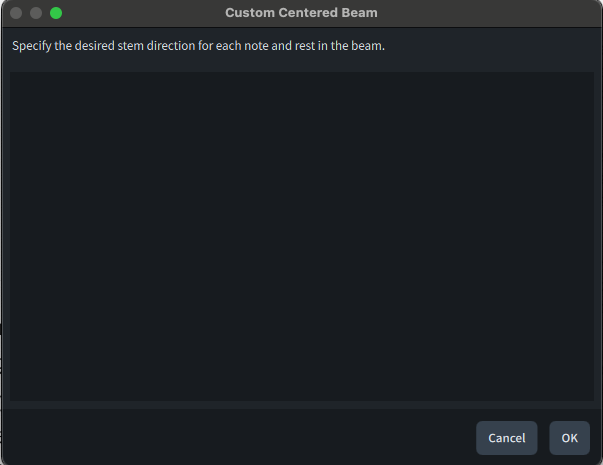 That’s probably because there are two voices involved in your selection (hence the need to change the voice column index, to only select the dotted quaver-sixteenth). 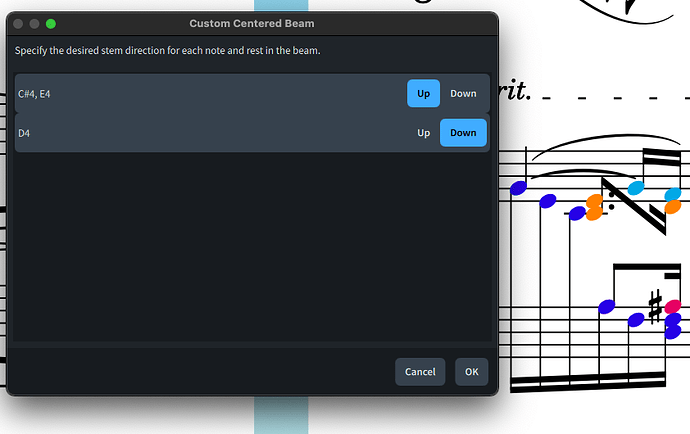 Yes, I did change the voice column index on your file, to select only the purple notes - but the dialog box was blank. Hmm.

Simply try and use the Custom Centered Beam on that little example!