There are a few things with the Orchestral and Band score orders that I’ve always had to adjust for Jazz in almost every file. Of course the automatic reordering can be annoying too. As there’s an entry in doricolib files for instrumentScoreOrders, I thought I’d give editing the Score Order a try. It looks like it could be possible to create another new entry and to actually have a Jazz score order, and it will even appear as an option in Dorico, but then it doesn’t seem to actually work. Attached is a doricolib file that will replace the Band score order with my new Jazz order in Sort Players in Setup. Just add it to your user DefaultLibraryAdditions folder. (It will still be called Band.) Obviously if you need to use the Band order, don’t use this file, or if you need Band but not Orchestral you can edit the file to replace the Orchestral order instead.
EDIT: See revised file below
JazzInstrumentScoreOrderV4.zip (3.8 KB)

I would definitely welcome any feedback, or if there are any suggestions of things to change, as it’s still a bit of a work in progress. I ordered all 600+ instruments that Dorico currently has, and basically the order is as follows:

WW’s - Clarinets are currently wrong in Dorico, so I moved A under Bb. Moved Basset Horn to under Alto Cl. No strong opinions, but moved Didgeridoo and Dawus up under Recorders.
Brass - Trumpets above F Horns, like in Band scores
Vocals - typically above rhythm section, or at top as soloist, so placed here
Pitched Percussion - Vibes or Marimba are often part of the rhythm section
Guitars
Organs
Synths - Why 2 piano.electric entries in Orchestral order? I removed one.
Pianos
Bass - used Upright Bass and String Bass here, but left Contrabass with Stings
Drums
Unpitched Percussion
Harp
Strings - Why 2 strings.uprightbass entries and aliases? I removed one of each.
Generics - Moved generic Bass to be under generic Grand staff

For Unpitched Afro-Cuban Percussion, I moved them more or less to the order presented on pages 30-31 in the book The Essence of Afro-Cuban Percussion & Drum Set by Ed Uribe. It’s basically higher pitched to lower. I did change Bongos to go above Congas where he has the opposite. Bongos are higher pitched, and the Bongocero almost always is playing Bell as well which is right above. For Brazilian Percussion, I used Uribe’s Samba Percussion Score on page 89 of The Essence of Brazilian Percussion & Drum Set. Sometimes this had to be integrated with the order in the other book. (It seems like a lot of pretty common percussion instruments are missing too. No Bombo? Palitos? Batá Drums?) There were 2 entries for instrument.percussion.other.tambourine and instrument.orchestral.unpitched.triangle so I deleted one of each. For others, I either left as the Dorico Orchestral default, or used the Kurt Stone orders starting on page 205. For unpitched, it’s basically the Latin stuff I use, then Orchestral, then Marching. I left the Marching stuff untouched.

The Sort Players button seems kinda buggy too. Sometimes it responds, sometimes not. I’m not really sure about why it doesn’t seem to work consistently, but with the Orchestral score order selected you should get an ordering like this:

Clarinets are in the wrong order, Horns above Trumpets, Unpitched Percussion is basically alphabetical, Vocals under Percussion, and both Contrabass and Upright Bass at the bottom. After applying the “Band” score order (which has now been redefined to be Jazz with the doricolib file), you should get this:

Clarinets are correct, Horns below Trumpets, Bass above Drums, Unpitched Perc better organized (as far as I can tell, I can’t do anything about the bracketing), and other Strings at the bottom. Any thoughts, comments, or suggestions?

Have you tried the Notation Central Jazz templates? Perhaps they’d be a starting point that you could tweak and save as custom playback templates.

And, thank you very much for sharing the fruits of your efforts🤗

Have you tried the Notation Central Jazz templates?

I’m sure there are plenty of people that find them handy and useful, but I kinda hate fake handwritten music fonts. (I was originally trained as a hand copyist back in the 90s, and have read a lot of music copied by some amazing hands) They also don’t really solve the score order issue I was hoping to solve here. As long as I’m starting from templates, I’m ok, but I’d love to have a more complete Jazz score order that takes into account some more unexpected ensembles. The Latin percussion in the Orchestral order for example needs a lot of work to appear correctly in Jazz.

For a more personal reason, I have an ever expanding doricolib file of custom instruments that I need to have incorporated in my own score order too. I also hadn’t realized until fairly recently how much “junk” gets stored in a Dorico file, like outdated settings, fonts, score orders, etc. I’m not sure I’ll ever get there, but the more I can actually start from a File/New file, the better I think. (I have lots of other settings, like page templates, chord symbols, etc. all as doricolib files as well.)

I think this is close to being a finalized Jazz score order with the factory instruments. If I make a few tweaks I’ll post a new file, but others are certainly welcome to chime in with suggestions and/or tweak the file themselves.

My assumption is that the .doricolib file is just telling where the existing instrument list to sort them, so I wouldn’t remove anything

My personal opinion is to put it at the top of the rhythm section.

I’m inclined to agree with your thinking on this, though I can see where someone might be using them interchangeably. There’s greater risk of someone going for Contrabass in a jazz setting and not getting it where they want than the opposite.

Also, for what it’s worth, I find translating the list by turning all commas into a newline and posting to Pastebin (or a newfangled Github gist) to be a bit easier for passing this information around.

My assumption is that the .doricolib file is just telling where the existing instrument list to sort them, so I wouldn’t remove anything

My personal opinion is to put it at the top of the rhythm section.

That seems like a strong option. I posted on MET too, and there wasn’t a consensus on the timpani. Two well-known and respected jazz arrangers were split on the timp. positioning. If it’s under low brass, and there aren’t any vocalists, then it would be at the top of the rhythm section as you suggest.

I find translating the list by turning all commas into a newline and posting to Pastebin (or a newfangled Github gist) to be a bit easier for passing this information around.

I just pasted it into Google Sheets, then copied and pasted using Paste Special / Transposed to turn the entries into Rows, then created a JOIN formula in a cell to reassemble them. Having each entry on a row made it easy to move up or down, and the formula made it easy to copy and paste all back into the doricolib file.

Darcy James Argue had a good point about the Harp too. If it’s added to a jazz ensemble, rather than an orchestral ensemble, it belongs more with the plucked strings than under non-pitched percussion. In a more orchestrated setting the conductor would probably want it above the strings. I think I might simply change the soloist location to under the Vocals, as that may be a better option for some instruments that could reasonably go in different locations in different settings.

I was making another pass through, and saw another duplicate. There’s only one definition for Hand Claps in the instruments.xml …

… so why are there two locations for it in the Orchestral score order?

If there’s a disagreement about order Dorico seems to go with the later position. Hand Claps are both before and after Finger Snaps, but if I add both to a project I get this: 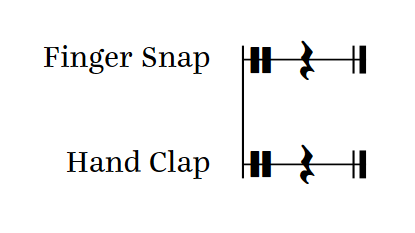 If this is the order I actually want, then the first hand.clap entry in the order doesn’t actually do anything at all and can be deleted. Lots of tomtom duplications too.

Anyway, after some feedback I made quite a few more tweaks to the original file I posted, most significantly moving the soloist location. I’m still not happy with the Harp location, but I ended up leaving it above the Strings, and if you ever get to write for Brandee or Edmar, you can use the Soloist option to have it automatically placed above the rhythm section. (Edmar is an entire rhythm section by himself, LOL) Hopefully at least someone will find the file useful!
EDIT: See updated file in original post.

By the way, where would my Default Library Additions folder be?

What? No transparency sheets?

By the way, where would my Default Library Additions folder be?

On Windows it’s at C:\Users\yournamehere\AppData\Roaming\Steinberg\Dorico 4\DefaultLibraryAdditions. If it doesn’t already exist, you can create it. I’ve seen others post that it’s at /Users/[username]/Library/Application Support/Steinberg/Dorico 4/DefaultLibraryAdditions on Mac, but I’m not a Mac user.

I still have my Pelikan Graphos with the red dot Z1.0 nibs!

Fred, you are a gift! Thanks. It was a lot of work copying back then, but what a great way to learn and understand notation

I don’t do Mac either. Did once but got rid of it. Never liked using it.

I found it and installed the file; how do I make use of it? Sorry for so many questions, but these concepts in Dorico are unfamiliar to me.

It basically redefines the Band score order to be this new Jazz score order. I can’t actually change the name, or it doesn’t seem to work

Once installed in that location, and Dorico has restarted, in Setup, right-click the Sort Players button and select Band. 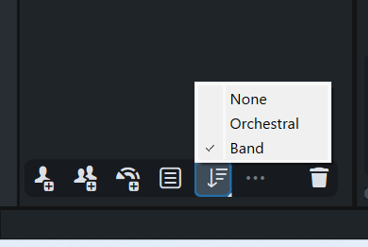 Now it should sort any players according to the new file. An easy way to check is to add a Clarinet in Bb and a Clarinet in A. Dorico sorts these incorrectly (with A above Bb) by default, so if it sorts Bb over A, then it’s working. You can mess around with adding a bunch of other instruments and compare the differences too.

Cool. Thanks SO much!

Seems to work pretty well; my congas, however, don’t show with the bongos, but at the top of the score. No biggie-easy to move. I can’t imagine how much effort you put into it, but I’m very glad (and appreciative) that you did!

Hmm, well obviously that seems wrong, but I can’t seem to reproduce it. Just to confirm, after installing the revised file in DefaultLibraryAdditions, and restarting Dorico, you are starting from File/New, right? I might be wrong, but I think score order might be embedded in existing files and then of course it won’t work. After selecting the Band order, and clicking Sort Players (sometimes a few times, this seems buggy to me and doesn’t always work first try), you shouldn’t get Congas at the top. If I add a rhythm section and a bunch of percussion I get this ordering with the Jazz score order doricolib file:

An argument could be made to put the Bell above the Guiro, but I didn’t want to split up Bongo and Bell as they are usually the same player, so seem to go together. You’re getting different results than I am here with the Congas?

I changed the Soloist location too, so it’s now above the rhythm section. Even if you click Soloist for the Congas, they shouldn’t appear on top, unless of course there are no WWs, Brass, or Vocals. With Soloist selected I get this ordering: 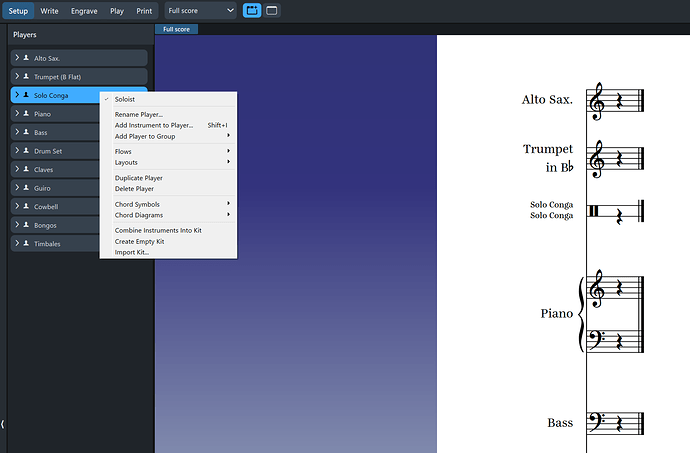 Obviously I’d love to figure out what’s going on if this file isn’t working universally, so if you still can’t get the correct sorting, definitely let me know, thanks!