I tried a sligthly different method and wonder if it is expedient or if it could be optimized.
In a trio

However, for some reason, I get slight discrepencies of microtonal accidentals in some cue notes; I guess this is a bug and has nothing to do with the method since the problem occurs also with the method described above. I would be interested in your opinion.

I don’t have time to construct this sort of scenario from scratch. I’d be more than happy to look at an actual project, though.

I would be happy to send you the document - may I?

Sure. I’m due on stage in 10 mins but can take a look later today…

Can I send it without posting it publicly? Via eMail?

If the file is not too large, one can attach it to a PM by clicking on a user’s avatar/name and using the message button.

You can private message me, as Derrek said, or it’s [redacted].

Having taken a look at the project I think the problem is that your 24-EDO tonality system still contains a whole bunch of accidentals that alter the note by the same interval.

For instance, all three of these accidentals lower the note by a quarter-tone: 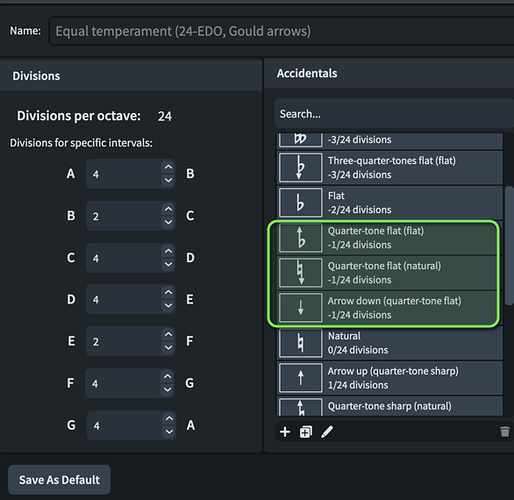 The default 24-EDO tonality system won’t let you remove default accidentals, but if you create a copy of that tonality system (there actually already seems to be one in your project), then remove the duplicate/triplicates, then reapply the key signature so that it references the correct tonality system, Dorico will be consistent in its enharmonic spellings.

I will try, thank you, this is really hardcore stuff for a beginner like me

I have a problem with a piece containing a quartertone-flat natural accidental: for some reason this natural is changed to a quarter-tone flat-flat accidental in the cue notes of the parts (and only there). Changing the microtonal key did not help.
score = correct:

Please don’t post the same thing in multiple threads. For anyone reading (and I have already recommended privately that you reach out to @dspreadbury ) we’ve already had this discussion in this thread: Portions of full score in parts? - #10

I’ve now moved this to a new thread, combining the posts from both of the older threads that @lim.usic had posted in.

I think the issue here is that although you can override the spelling of notes in a cue in Engrave mode, you can’t choose a specific accidental, because of course there’s no way to do so in Engrave mode. I need to look into this further, which I will do when I get a chance.