I’m considering acquiring a MIDI keyboard purely to speed up inputting music with Dorico 3 on my Windows 10 PC. As a complete ignoramus on all things MIDI, I’ve no idea where to start. I’ve the space for a 61 or 88 key unit and it would seem sensible to go for a touch/velocity sensitive model, perhaps with a sustain function. In short, something fairly simple, easy to set up and use and available in the UK. Has anyone any recommendations?

It’s all about budget. Also, do you want a MiDI controller only; or one with onboard sounds? The latter is significantly more $$.

I love my Roland RD-2000, but I had to basically sell a kidney. And I’m a pianist. If you want something a little more mid-range, you have a zillion good options.

If you have the budget and space the RD2000 is great, can function as the audio interface, and can map functions to its sliders and knobs. It’s going to be my main piano for twenty years. For something smaller I use Akai, but I’m interested to see what the Behringer with motorised faders is like. Maybe someone knows?

Then check out the Roland A-88. It’s a great MIDI controller with a nice touch and a full keyboard, and not at all pricey for what you get.

Does note entry include playing piano parts live? If it is just for non-realtime entry then (IMVHO) smaller and thinner is better.

Mandryka hello,
Well, the MIDI keyboard is just another kind of MIDI controller… there are many of them like, drum pads, breath controllers, consoles…
Many of the MIDI keyboards include console part with faders and knobs, also panel for DAW Transport control etc…
As Dan already said everything is up to your budget. Personally I recommend you 88 keys, if your have plans to use it only at home/studio.
If you need something portable… there are many options.
I have an old M-Audio Keystation Pro 88 and it works almost perfectly for me.
You can check here about the keyboard:
https://www.thomann.de/intl/bg/midi_master_keyboards.html

Many thanks, all, for the advice - very helpful.

If you’re just in it for note entry, alesis VI is perfect because there are 48 buttons you can assign shortcuts to. Take a look at my (now old) pics here. I’ve since labeled even more buttons and added a SDXL in the upper right.

Ooh…I missed that earlier thread. That looks great, Romanos, If it’s anything like the Alesis QS8 it’s built like a tank.

I’m curious how people set up an 88 keyboard and their computer for notation. I use a two-octave keyboard, which fits right in front of my laptop and is about the same width. To the side I can place sheet music. It seems a full-width keyboard makes it awkward to key in duration, sharps, etc. Pictures would be handy!

The only pain for my two-octave midi keyboard is having to shift octaves. It has a button for that, but I constantly forget which octave I’m in and have to fix or re-enter notes. Also harder to play chords when experimenting (not notating).

I’m very happy with my M-Audio. Touch sensitive, sustain pedal (not included). USB connection works well on my Mac and cheap but sturdy.

I don’t know if they’re available in the UK, but in the US at least Casio makes several inexpensive keyboards, some with touch, some without, but all with MIDI. The last time I checked there were several models under $300 and one (without touch sensitivity) for under $150. All 61-note. You can get them at Sweetwater, American Music, or Guitar Center. Probably other places too.

Since you have a (real) Bosendorfer in the other room, I would think just using something for note input you wouldn’t even need touch.

Unless I’m playing in a piano or keyboard part, I use a two octave MPK mini to the side by my left hand. Right side is ipad with streamdeck. If using the 88 I have a reduced streamdeck layout on my iPhone.

I’m curious how people set up an 88 keyboard and their computer for notation.

I have an L-Desk. My QWERTY keyboard and computer screen are on the main desk, and a 6-octave Yamaha DX-7 is on the desk “L” to my right.
I use my right hand to play notes and my left to choose durations, etc.

I’m currently working with this, mostly: 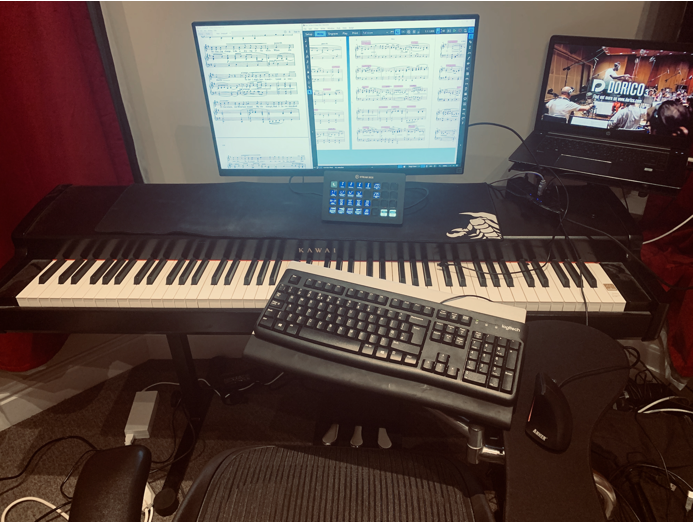 Keyboard and mouse (and sometimes StreamDeck) are mounted on adjustable trays that are attached to the chair. Monitor is attached to a microphone attachment on the keyboard table (via a VESA adaptor). Though everything’s adjustable I’m not quite content…

rubberfingers hello,
Probably you should try to work with full ranged keyboard?! I’m not a pianist, but I can’t imagine to go back to a smaller keyboard. Especially if you prefer to do real-time recordings… and if the keyboard has more controller buttons which can be assigned as StreamDeck.

I use the Roland A-49 at my computer desk, which I find perfectly adequate. It has buttons for octave shifts as well as standard MIDI controls, and a Theremin-style wavy hand interface, which I’ve not used at all.

If you’ll be playing with both hands (and in real time), then you’ll want a full length (i.e. 88 note) keyboard. If you’ll usually be playing with one hand with the other on your computer keyboard, then get something with 49 keys. I’m sometimes doing one thing, sometimes the other (depending on the nature of the task), so have both. If you’re a reasonably capable player, you might want the same.

A two octave keyboard is too short for most purposes and will involve switching octaves too frequently. 49 keys isn’t too long to have on one’s desk and when playing with one hand, octave changes aren’t needed that often. I’d recommend getting something that isn’t too deep from front to back (like a Roland A-49 - it has a socket for a sustain pedal) and not bothering with lots of pads. If your monitor or monitors is/are mounted on an arm rather than on a stand, you’ll have more space to play with. A keyboard like this doesn’t have to stay on your desk: it will weigh very little so just put it on there when you need it. You can then optimize the layout for other activities.

If you’re not too fussy about the feel of the 88 note keyboard, get something like a Studiologic SL88 Studio (which has aftertouch in case it might ever be useful, and four sockets for pedals). I’m in the UK but usually order from Thomann.

Probably you should try to work with full ranged keyboard?! I’m not a pianist, but I can’t imagine to go back to a smaller keyboard. Especially if you prefer to do real-time recordings… and if the keyboard has more controller buttons which can be assigned as StreamDeck.

I’m mostly working with voices. Is there a good way to input multiple voices simultaneously?