The problem is … it’s not working.
Whether I check “Latch Buffer” or not, the results are the same.
This is my setting: 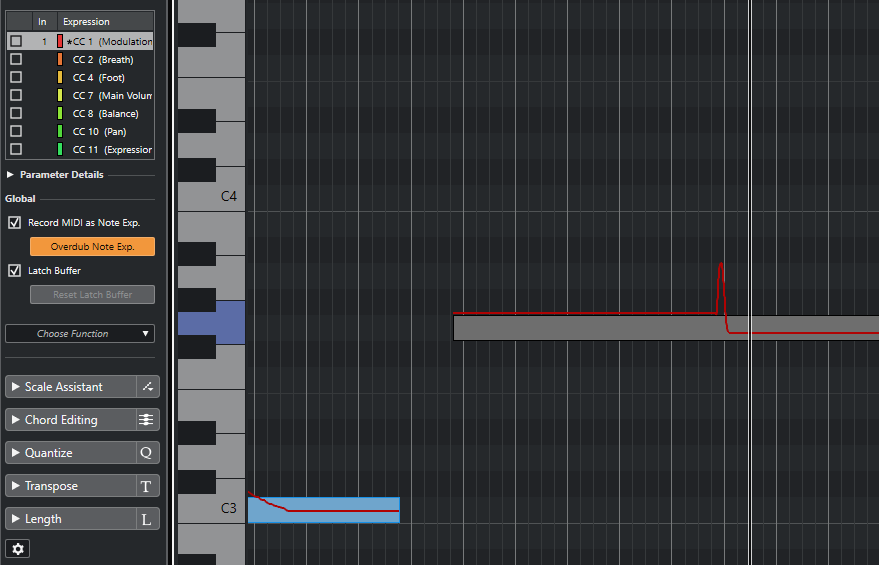 Not sure but it may have something to do with this:

Expression Maps reset on Stop is still an issue Cubase

I know it has been discussed in the past but this is still a pretty big issue that needs to be addressed. When using expression maps to switch midi channels on multitimbral instances of Play, Kontakt or Omnisphere, it’s very easy to setup up to 16 different articulations or sounds on the same track. It’s like a ‘‘build your own’’ keyswitch patches if you like. Kudos for expression maps. The only problem is that Cubase resets to channel 1 on stop until it’s actually written down in the control…

The problem is … it’s not working.

It does work, that’s for sure. If you want to write out an exact step by step sequence of what you are doing, starting with no note expression data in the notes maybe we can help you understand what to expect.

@beatpete, this is unrelated to exp. maps

@steve I do this:

Result: the expression data for the notes is rewritten so that the initial value is the value in which I started moving the midi controller.
Initial recording:

(The error is when I started overdbubbing)

I expected the overdub to take effect only AFTER I started touching the control, leaving the note exp data before, untouched.

Unless I did not understand something about how it should work. You gif only showed the Reset Latch Buffer enabled, and how I’m not sure how you got to that state.

You gif only showed the Reset Latch Buffer enabled, and how I’m not sure how you got to that state.

Now, with your repro sequence I will try again (when I have a moment)

Now, I can’t actually understand what is supposed to happen based on what the manual says.

Overdub Note Exp. has to be active before it’s possible to activate Latch Buffer
(if that’s what is meant by Overdub)

So is it broken? I think so. What’s Broken? I dunno.

The way I understand it is following:

But here on my side (and I understand, you get the very same result), it seems like the Latch Buffer is always enabled, right? So you can’t get to the state, of the “jump” from the old (already written) value to the new one.

Moreover, if I try to record in the cycle, it seems, only the very first record is taken in account. I can hear the following records (incoming MIDI data change the sound), but they are not written/recorded.

Yes, what you’re saying makes sense to me… so is it behaving as designed or not in your estimation?

Yes, what you’re saying makes sense to me… so is it behaving as designed or not in your estimation?

I would say it’s a bug. Because it doesn’t matter if the Latch Buffer is enabled or not, it behaves always like as it is enabled. And from my point of view, this is the bug.

Exactly.
I did not understand from the manual what’s exactly supposed to happen, but nothing happened differently, that’s for sure.